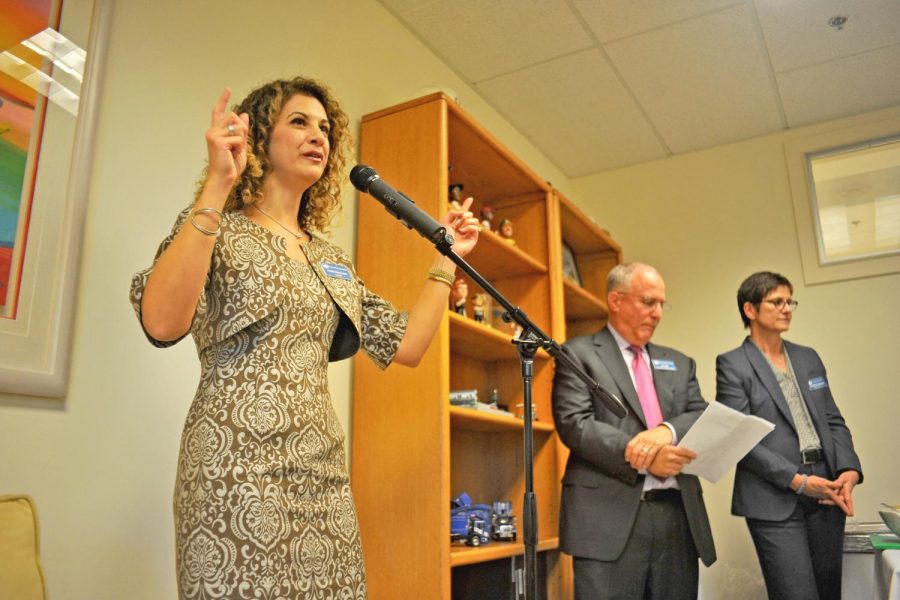 POINT RICHMOND — The Contra Costa College Foundation raised $129,000 toward its initiatives with a fundraiser at Zell and Associates offices on Sept. 28.

The money raised supports the college Foundation which relies on donations that fund their student scholarships like the Sy and Beverly Zell Scholarship and the recently established wraparound fund.

CCC students who find themselves in financial distress can apply for up to $500 in additional financial assistance through the wraparound fund. After receiving funding, part of the process requires recipients to write a thank you note.

At the fundraiser, funds were raised through sponsorships and entrance fees. The fee to attend was $100.

“This amount of money could help about 240 students through scholarships,” Zell said.

The event was attended by community members like Richmond Mayor Tom Butt, CCC staff and those connected with Zell.

“You hear, it’s not what you know it’s who you know. This is a good example of who you know,” Zell said.

At 6 p.m., the room quieted for speakers as several speeches were given by those in attendance.

Mehdizadeh said she was at the event to tell the community about CCC and how it serves the Richmond area.

She said the most important aspect of the Foundation is its fundraising to support students.

College Foundation Coordinator Sara Marcellino said a typical scholarship may have restrictions on what the money can be used for. However, the wraparound fund is unrestricted.

Mehdizadeh said the thank you note is a way to put a personal aspect to the funding and show what the money is being used for in order to help students. She said the funding can go to helping pay for anything, from expensive books to transportation.

“When students are about to drop (out of school) we say ‘no’ and offer support,” Marcellino said.

CCC is the first college in the district to have a wraparound fund.

College Vice President Ken Sherwood said, “We lose many students because of life challenges. With some scholarships, students need to pay it back. But for the wraparound they don’t need to.”

Sherwood said in his experiences with other college foundation programs, the wraparound fund and helping (college) departments are important. “The Foundation doesn’t just provide academic scholarships. They get involved with the students and departments,” he said.

Walker-Griffin said he was at the fundraiser to offer a student perspective and speak on how the scholarships can directly address students’ needs.

“The extra funding can mean the difference between a student staying or dropping out of school,” Walker-Griffin said.

The annual fundraiser used to be a golf tournament called “Swinging for Scholarships.”

Zell said attendance at the tournament dropped as the years progressed, so he felt revamping the fundraiser would deliver a better turnout with a lower expense.

Zell said his family has been involved with CCC since the 1940s.

Zell’s father, Sy, was president of the college Foundation and Eric has 15 years of experience on the Foundation board.

Eric’s sister Bonnie Zell said her father never graduated from college and she thinks that is part of the reason he was so committed to helping the community.

“Eric is continuing our father’s legacy with his work with the Foundation,” she said.