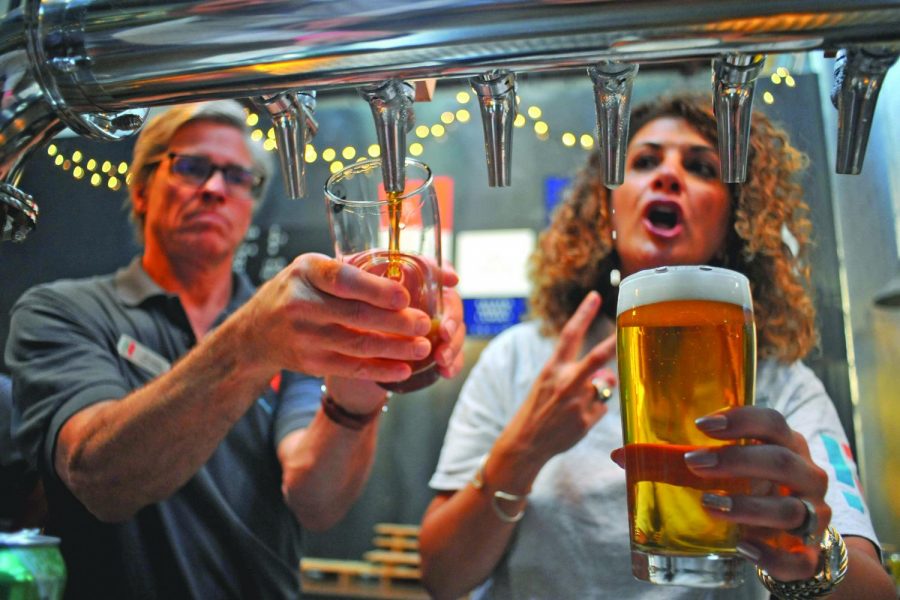 Richmond City Manager Bill Lindsay (left) and Contra Costa College President Mojdeh Mehdizadeh (right) bartend for the Richmond Promise during the Cheers for the Promise fundraising event at East Brother’s Brewery in Point Richmond, California on Wednesday, Sept. 27, 2017. Richmond Promise Executive Director Jessie Stewart said raising $1,500 is the goal because it is the same amount of a Richmond Promise yearly college scholarship presented to high school graduates living in the city of Richmond.

RICHMOND — As a way to celebrate the work of many in this city, school administrators, city officials and community leaders joined the Richmond Promise and East Brother Beer Company to honor West Contra Costa County teachers during the Cheers for the Promise fundraising event at the East Brother Brewery taproom.

The fundraiser,  held Sept. 27,  was about bringing positive community awareness to the promise and celebrating those who make it a reality in Richmond, Richmond Promise Executive Director Jessie Stewart said.

Stewart said the goal of the fundraiser was to raise $1,500 —  the amount of a Richmond Promise yearly college scholarship presented to high school graduates living in the city of Richmond.

“Our community and education partners inspired this event,” she said. “We wanted to kick off the next school year by celebrating the partners that are behind the promise.”

The promise is a partnership and community effort to create change in young people’s lives through higher education.

Mayor Butt said the Richmond Promise is one of the city’s most important programs. It’s also one of his personal favorites.

“It’s a popular program and it gets a ton of support from City Hall,” Mayor Butt said. “It’s wonderful helping those students fulfill their dreams and bring change to our community.”

“Fifteen hundred dollars a year is a life-changer for so many students in our community and we’re so thrilled to provide that kind of opportunity for them,” Mehdizadeh said.

She said she was honored to work behind the bar in support of the Richmond Promise and enjoyed her time bartending for her fellow teachers and administrators for such a good cause.

“What we’re hearing from students, time and time again, is that they wouldn’t have had the opportunity to go to college were it not for the Richmond Promise,” Mehdizadeh said.  “It’s really about the bright future of our young people. What can be better than that?”

As the sun began to set over the brewery’s neighboring hillside and more people started to show up, conversations poured outside over more beer, live music and games of bocce ball.

CCC alumni Russell and Raynard Lozano offered their trademark Filipino inspired American dishes parked outside the taproom in their Curbside Kitchen food truck. All tips earned by the food truck went toward the promise program.

Over raised beer glasses Stewart performed a toast to honor the program’s partners, West County’s teachers and administrators who have supported the promise since its founding in 2014.

Stewart said with over 100 students currently starting their college careers at Contra Costa College, she knows those students are on a pathway to success having CCC as a home base of support.

Mehdizadeh, who also serves on the Governing Board of the Richmond Promise, said keeping the partnership strong between CCC and the program is of utmost importance for both parties.

She said, with CCC being the first major partner of the promise, she works with the program on the policy level to ensure students are receiving the tools necessary for a successful future.

“What we do at CCC is take those incredible young minds in and provide them the opportunity to really find themselves and find their passion,” Mehdizadeh said.

After the toast, raffles were held and five lucky educators won gift bags. All tips collected at the bar went toward the Richmond Promise program.

Stewart said the program is part of a larger movement that is happening to build a college-going and graduating culture throughout the city.