Despite a sloppy first half performance, Comets manage to salvage a 3-3 home tie 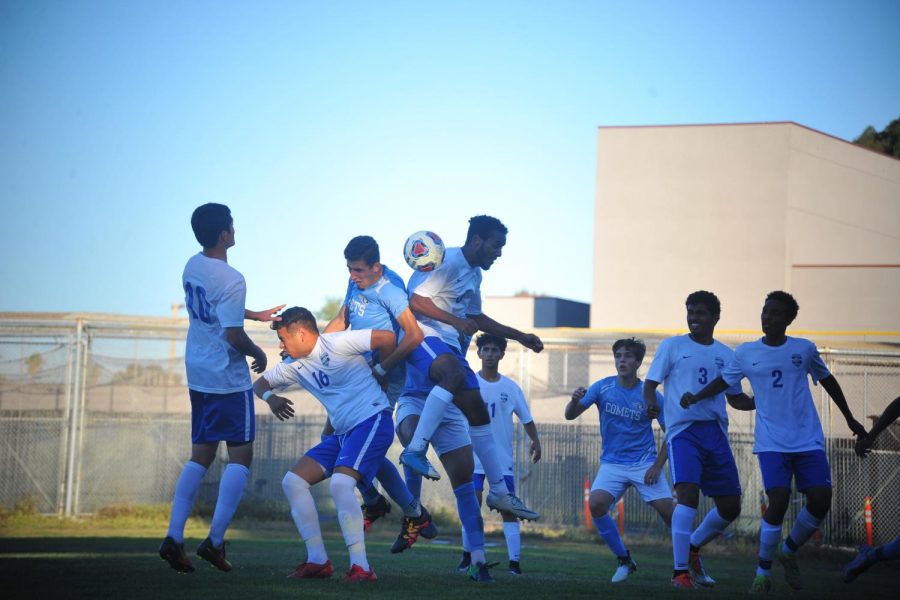 In yet another high scoring game, the Contra Costa College men’s soccer team tied at home against Merritt College (3-7-2 overall, 0-0-2 in the Bay Valley Conference) at three goals-a-piece on Friday.

After letting the Thunderbirds take a 2-0 lead early in the game, Comet forward Eduardo De Loa Jr. scored to help the team regain some confidence before the halftime break.

Shortly after that, Thunderbird forward Mohammad Haseen scored a header to extend their lead to 3-1, which was a momentum killer for the Comets (1-5-5 overall and 1-0-1 in the BVC).

During that play, CCC’s starting goalkeeper Ronaldo Hernandez and defender David Padilla collided, resulting in both players exiting the game. Padilla returned later in the contest.

Comet forward James Sibrian said that the team came in with too much confidence and that led the Comets into chasing after Merritt’s players.

“The T-Birds kept the score up (by two in their favor), but by the end of the first half we didn’t have the fire and (positive) attitude. Our  intensity didn’t match theirs (Merritt),” he said.

“Sometimes passes don’t go where you want to put them,” De Loa Jr. said. “We noticed that they had a lot of their players in the middle of the field, so we began to play the ball wide and that’s how we came back,” he said.

In the 55th minute of the second half, De Loa Jr. scored his second goal of the game off of a header from a free kick-set play, which brought the team within one goal of Merritt at 3-2.

Ferguson said that the team showed its competitiveness by its second half performance and by not letting its first half get to them.

“When we were losing, we kept fighting, and stayed composed,” De Loa Jr. said.

For the last 15 minutes of the game, both teams began to push the ball forward, creating multiple opportunities to score.

The Comets capitalized in the 75th minute of the game when Padilla put forward Anthony Maytum through Merritt’s backline then put the ball into the back of the net to tie the game at three.

“The intensity picked up in the last few minutes of the game. The team got organized, played smarter and didn’t force the ball,” Comet goalkeeper Mohammedhessein Jumshidian said.

This was the Comets second game of BVC play. The draw puts CCC in a tie for second place with Yuba College with identical (1-0-1) records.

“Overall, this game was a battle. We’re just going to move on to the next game,” Sibrian said.

The Comets will play last year’s BVC runner-up Napa Valley College at home on the Soccer field Friday at 4 p.m.