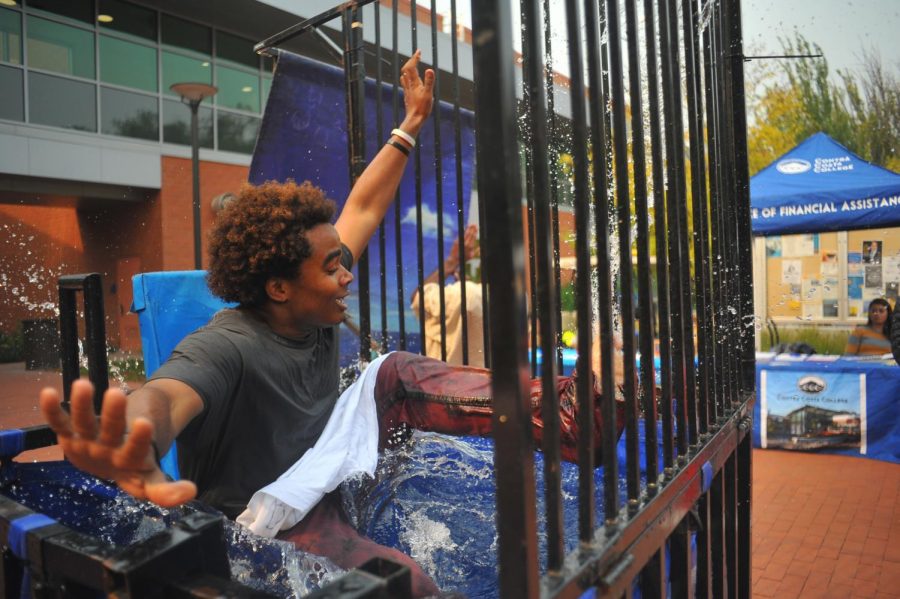 A sense of unity was clearly evident at Club Rush, held Oct. 11, as each club took on a specific social issue to tell fellow students about.

Students and teachers alike danced to music provided by a live DJ while the College Center Plaza was dusted with ash from the Northern California fires.

As students talked to a myriad of club representatives on the perimeter of the plaza, a dunk tank was placed in the center and quickly became a hit among students.
A table with two chess boards even helped stir up some friendly rivalries.

With a theme of unity chosen by the Associated Student Union, each club was responsible for representing an issue that has divided people in the U.S.

“One club is doing Black Lives Matter and another is doing animal cruelty plus others to really show unity,” explained Student Life Coordinator Joel Nickelson-Shanks. He said that the idea for the dunk tank was to have various students wear shirts that said things like racism, sexism, bigotry, other types of social justice issues.

Students signed a participation sheet and then threw a ball to dunk the person and symbolically “destroy” that type of discrimination. This idea, however, quickly descended into many students volunteering and participating soaking the plaza’s brick pavement in the process.

“Everything feels united by the great energy at all of the tables,” political science major Chris Miller, who is part of the COPA Club which was representing LGBTQ issues, said. A unique feature of their table was a set of papers with QR codes, which students could scan with their phones, that linked to information about various important events in LGBTQ history.

A member of the Muslim Student Association, electrical engineering major Mohammed Arsalan, explained that the MSA table was letting students try on various types of Muslim head wear. Qossay Housheya, a computer information systems major, who is also part of the MSA, said the club was also doing henna artwork and had information displayed about famous Muslim people.

Arsalan and Housheya said they hope the work they put in will help show fellow students that Islam is a peaceful religion.

The ever present smoke on campus caused by the wildfires throughout the North Bay Area offered an interesting opportunity for unity at the event as many students wore masks covered in bright rhinestones.

“I believe an event like this is important to help with campus unity and to show students that we can come together in times of widespread discrimination,” Miller said.