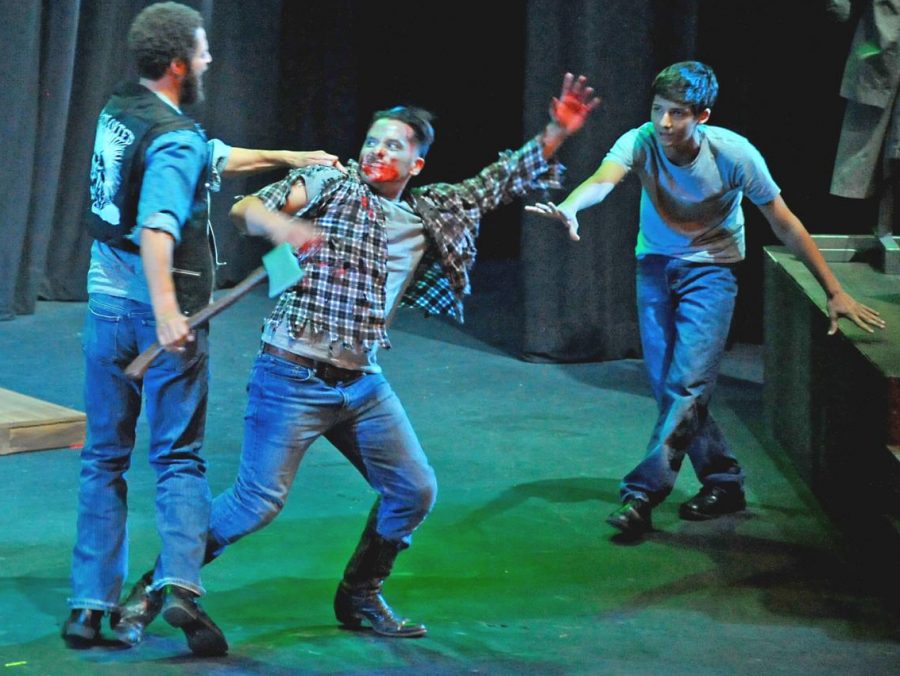 Written by Tim Bauer and directed by drama professor Tara Blau, the documentary-style play is loaded with witty banter and slapstick comedy brought to life by a wonderful cast creating an unconventional night of theater.

“Zombie Town” follows a theater collective from San Francisco that travels to the small town of Harwood, Texas to investigate a recent zombie outbreak. The play weaves together interviews of the surviving residents’ first-hand accounts.

Five actors portray the residents of Harwood and the theater collective members, switching between different characters from scene-to-scene.

These character transitions are visually marked by adding and removing pieces of clothing and are made smoothly throughout the entire play, which can be difficult to pull off live.

Diego Loza plays characters like the mayor of Harwood and the gravedigger, Otis Graves. Loza does a fantastic job of portraying two totally different personas. Loza’s great country accent contributes strongly to the setting and making it feel authentic.

Josiah Garcia plays theater collective member Dave Winfrey and a local hardware store owner. He brings another aspect of comedy through repetition of phrases like “them hills” in reference to the hills from where the zombies originate.

Garcia captures the spoof in the redundancy of a mockumentary with his shift in tone and physical movement that drives the play forward.

As residents continue to recount their theories and experiences with the brain-eating, re-animated corpses, the hilarious and absurd antics are revved up.

Once the audience is introduced to the over the top Slash Murphy, a rebellious rock ’n’ roller, the laughs and crude humor are plentiful.

Slash, who jumps out from behind the curtain and onto a small wooden platform, is the epitome of a stoner douche bag lady’s man.

Bryce Smith is outstanding as Slash. He is remarkably convincing in his role as he screams about beer, boobs and Led Zeppelin.

Shortly after Slash makes his entrance, Didi Drago is introduced by Slash who recalls spotting Drago and her best friend at the coffee shop before going over to shamelessly flirt.

Kamaria McKinney nails the character of Didi, who is the stereotypical ditzy cheerleader who starts every sentence with “like.”

McKinney does a masterful job with all the nonverbal ticks, like obsessively filing her nails throughout the show as she throws sass and spot on zingers toward Slash.

The chemistry between the two is magnetic, which helps maintain the continuous onslaught of  comedic banter, leaving the audience in stitches.

The minimal set design of three wooden platforms also helps feature, and not distract, from the actors.

This comes in handy as Didi and Slash utilize the whole stage to build up the suspense of their first accounts of the zombie who dug itself up from the grave and attacked Didi’s best friend.

As both Didi and Slash react to each other’s accounts with pandemonium and energy, they meet accountant Eric Swerdloff, played by Mark Shepard.

Shepard delivers the best acting and characterizations of the whole cast, nearly stealing the show in every scene, with his humorous ad libs and bitter old man attitude.

The material and build up of action between Slash, Didi and Eric hearkens back to the cheesy 70s and 80s horror movie tropes where people should be dashing out the door — instead they investigate the creepy noise.

Every scene with Smith, McKinney and Shepard is a gem that almost outshines Loza and Garcia.

The trio’s experience with the zombie outbreak becomes a frantic and riotous farce. The number of laughs doubles alongside the one-liners dealt out by Eric.

Fast-pace scenes of hungry zombies who reach out for their next victims fuel the ending of the play as blood begins to fly and smear the stage.