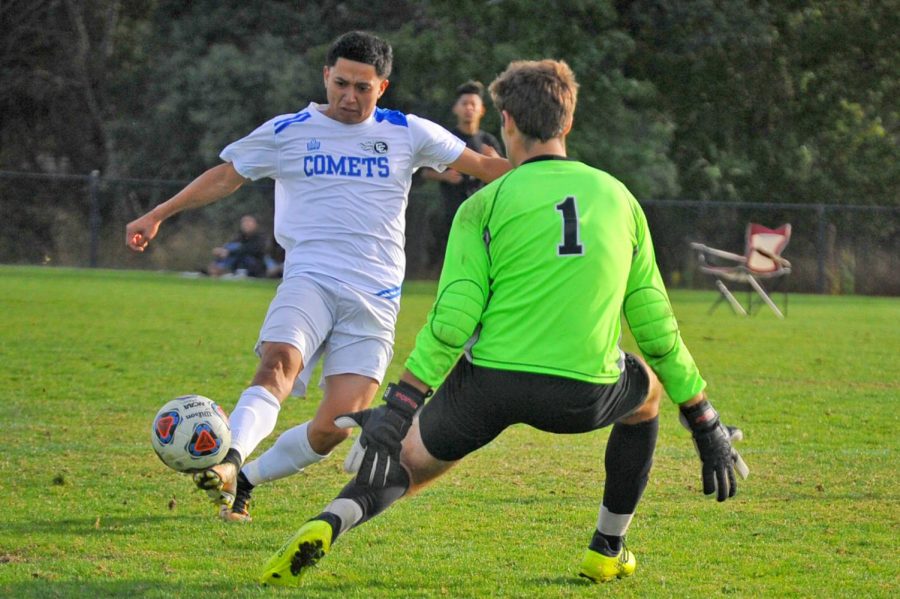 Comets’ soccer coach Nikki Ferguson told his players to play aggressively and the result was them winning most of the 50-50 balls.

Both teams made no excuses about the damp environment as players sank into the ground falling all over the field.

The players just wanted to enjoy the opportunity to play competitive soccer again.

The Comets next game is against Merritt College at 4 p.m. Friday in Oakland.

“We (Marin 1-3-1 in BVC, 2-6-3 overall) were anxious to perform after coming off of a victory against Mendocino,” Mariner freshman Luis Javier Bernal Martinez said.

The wet condition of the Marin soccer field proved not to be a  setback for the Comets either because they didn’t let the moist field stop them from setting the tone throughout the game.

The Comets also were eager to get back on the field, since they’ve had to wait until the air was safe to breathe, after more than a week of fires in the North Bay area.

CCC showed no signs of rust from not playing for a long period of time and took full control of the first half, scoring four goals, leaving Marin scoreless.

“The longer you stay off of the field, the more anxious you get and want to play,” Comet striker Alejandro Fernandez said. “You’ve got to keep attacking and defending because the faster you get goals, you mentally kill the opponent.”

The Comet onslaught in the first half was led by Addison Escobar and James Sibrian, who each scored two goals.

CCC played with more spirit after the team notched a tie game against the Thunderbirds earlier in October. The team used the disappointment of earning a tie as fuel to outperform the Mariners in this contest.

Ferguson wanted the Comets to “stay composed” and maintain the energy they played with in the first half to continue into the second half.

The Comets took a commanding lead in the first half against the Mariners as the home team struggled to gain its composure.

During the second half, Comet right winger James Sibrian left the game after getting injured when blocking a kick from a Mariner player.

That play didn’t stop Alejandro Fernandez from scoring CCC’s fifth goal with a trick shot that Mariner goalie Colin Sneddon did not come close to saving.

Fernandez said against teams like Marin his team has to come quick and can’t take their foot off of the gas.

Marin winger Joseph Ndungu scored the Mariners’ only goal after receiving a throw-in, which led to an open shot.

The game never got close as CCC continued to execute its game plan of working together to trap Marin players and force turnovers.

During the game’s final minutes, the Comets and Mariners got a little physical with each other after making a play to fight for a 50-50 ball.

Ferguson stressed to the Comets his vision of being the “bigger man” on the field.

Players from both teams broke up the altercation and the game concluded in a lopsided victory for the Comets.