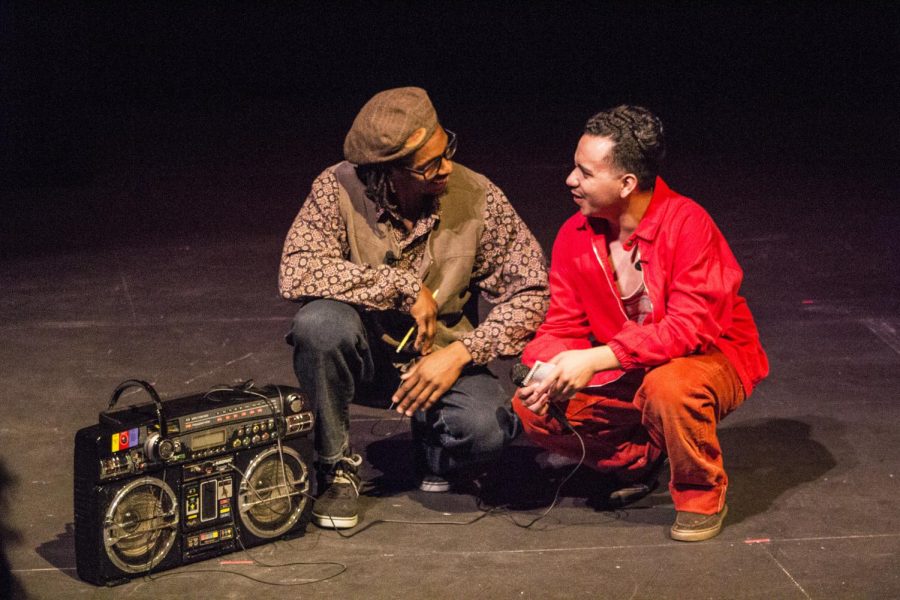 A hip-hop theater production telling a coming of age story of three teens with the integration of hip-hop’s deep history opens this weekend to continue the drama department’s theater season.

Hip-hop theater is a sub-genre of theater that grew in the early 90s, creating its own niche in theater with “How We Got On” being a play that sits comfortably in the genre.

Director Angelina LaBarre said “How We Got On” tells a story set in 1988 about three teenagers who come from “the city” and move into the suburbs, called “The Hill,” with each sharing a common thread with each other being hip-hop.

“We all have had that thing when we were teenagers that we identified and we loved, and for the characters that thing is hip hop,” she said.

The lack of a definite location for the action lends to the play’s relatability toward a large audience with diverse backgrounds.

The show is infused with the spirit of hip-hop culture through rapping, slang and the overall hopeful spirit brought to the world during the birth of hip-hop.

Umi Grant, who plays Hank, said the musical elements of the show are a contributor to the play being relatable.

“Music is a huge driving force in life. When people are sad they listen to sad songs or listen to something happy to pull themselves out of the funk, music goes with emotions,” Grant said.

LaBarre said, “It’s not telling a story and throwing hip-hop on it. It’s telling the story through hip-hop. We want this show to feel like it’s real people and this is how they express themselves.”

Drama major Oz Herrera-Sobol, who plays Julian in the production, said he absolutely relates to his character.

Julian is a self-centered character dealing with insecurities and a skilled performer lacking the ability to create hip-hop.

Herrera-Sobol said he is similar because he is a good rapper and performer but struggles to write anything. He said one of the struggles was rapping other people’s rhymes but with a unique personal style.

Grant said, “This story is about how all these teenagers come to find themselves while all being connected by a common thread.

Much of the dialogue is rapped, or at least spoken in a rhythm, and the script provides no information on what flow to use when rapping. LaBarre said the actors were able to work out the rhythms on their own.

This is the first hip-hop theater play Contra Costa College has performed. LaBarre said she thinks hip-hop is on the same level that people hold Shakespeare up to.

Hank, as a character, is someone trying to come into their own while dealing with a father that doesn’t understand his dreams.

Grant said Hank is a character that knows what he wants but lacks his own voice.

LaBarre said, “Both (hip-hop and Shakespeare) are elevating the language and challenging our ideas of what language can do.”