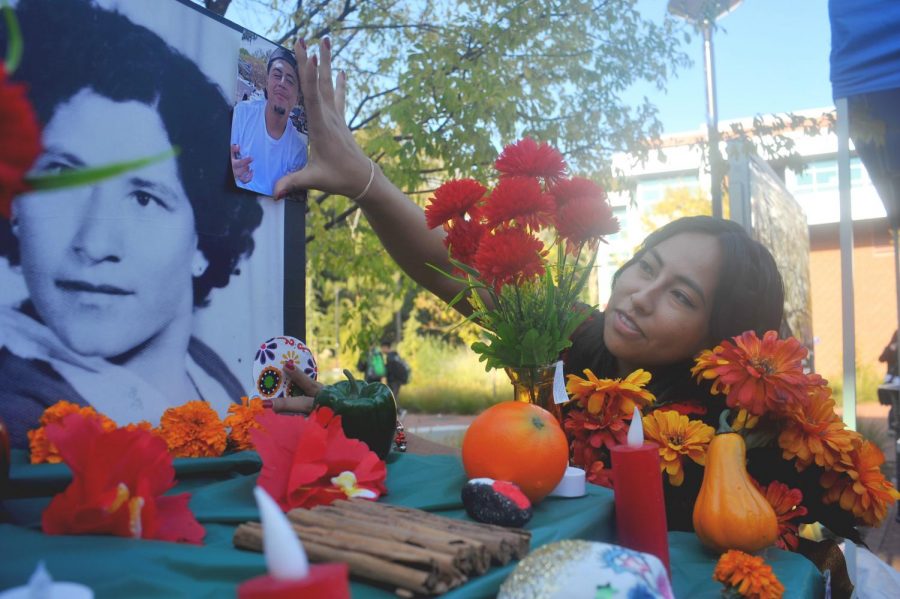 La Raza Student Union members set up an altar where they placed decorations, food and pictures of deceased loved ones during the Dia De Lost Muertos event on Thursday.

Every year holidays are celebrated, but for a holiday like Dia De Los Muertos (Day of the Dead) some people are unaware of what it’s all about.

The La Raza Student Union hoped to give students a better understanding of Dia de Los Muertos when it held a celebration on Thursday, with the opportunity for students to enjoy cultural activities, prizes, food and live music.

LRSU member Luis Huire said a lot of students, including students with a Mexican background, don’t know much about the Day of the Dead.

“It’s to celebrate our ancestors and show them respect for the things they’ve done,” Huire said.

The activities at LRSU’s Dia de Los Muertos event included Loteria, a game like bingo where a person wins by filling their playing card with the characters that have been called out.

Attendees also celebrated by paying respects to the ofrenda, which is an offering to the deceased, getting their faces painted and painting a skull to remind them that their time is going to come as well.

“Day of the Dead is for people to have a fun day, to celebrate life and that we are alive,” Sanchez said.

Some people celebrate Dia de Los Muertos by paying their respects to the dead at a cemetery with flowers, but LRSU chose to celebrate this day differently.

The LRSU also prepared prizes that included a parking permit for next semester for winning first place. Students could also win a gift basket which contained a $25 movie gift card. To be eligible to win the parking permit, students were urged to take a picture of themselves at the event and tag the shot on the LRSU’s Instagram site.

“The event made a strong impression on students,” event attendee Jordan Flechero said.

“I wanted to see what it’s all about, so I stopped to check it out.”

The prizes were well thought out by the LRSU as it helped students get involved and check out Dia de Los Muertos for themselves.

“A lot of cultures have customs that die out,” Huire said. “We’re just trying to show that it’s part of our culture.”

The club’s primary purpose for hosting Dia de Los Muertos was to prevent any confusion about what the event stands for and to share Hispanic culture with all Contra Costa College students.

“The Day of the Dead can be misinterpreted at times,” Guzman said. “Were open to letting people know that we don’t want to show negativity We want to show positivity.”

Students didn’t just learn about Dia de Los Muertos, they also learned just how passionate these students are about sharing their Hispanic culture.

“There are all types of people in the Bay Area and in school, so we want to show we’re about everybody,” LSRU Vice President Cesar Martinez said.

LRSU offers students a safe environment and is a club that is known to be all about culture, second year member Minerva Arebalo said. The club meets on Tuesdays and is hopeful students will be encouraged to join after seeing the effort they put in celebrating Dia de Los Muertos.

“We want people to be encouraged to join us,” Guzman said.