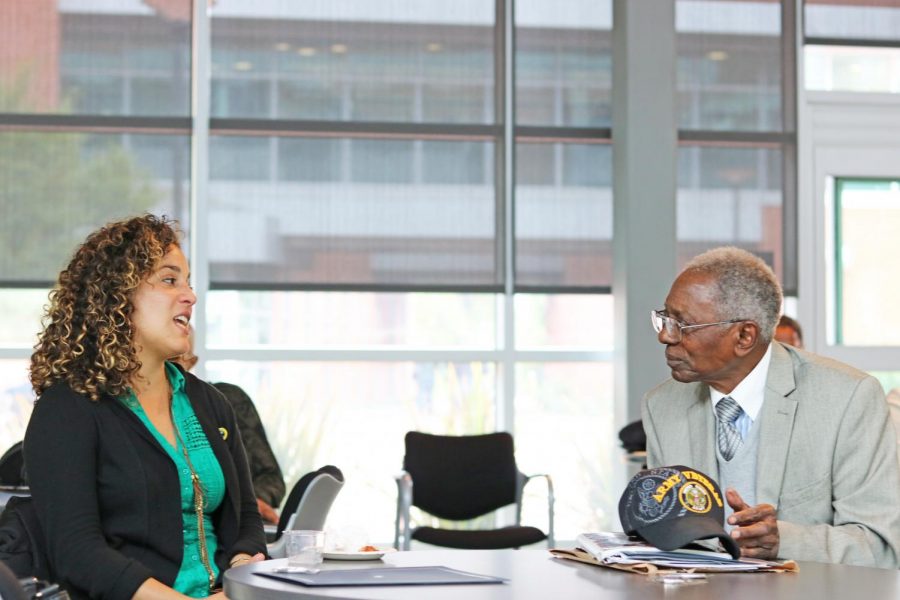 Sequoia Eramus (left), a staffer in the Richmond mayor’s office, and veteran Dr. Bob Hollis talk after the veteran celebration event at Fireside Hall on Nov. 8.

The Veterans’ Resource Center and Contra Costa College held a Veterans Day celebration to highlight the hardships that women veterans go through while serving in the military.

Also, four veterans were recognized with certificates for their service in the military during the event on Nov. 8 at Fireside Hall.

“I’m here to celebrate the female veterans who have contributed to the safety of our country because they do just as much as the men,” Hollis said. “The way our society raises men and women is the greater problem. They (women) bring a lot of value to our society. We have to change the way we treat women.”

Dean of Enrollment Services Dennis Franco said the event was held to recognize female veterans and how civilians need to help veterans ease back into society.

CCC alumni and Marine Corps veteran Perdomo said, “I think we (women) are not recognized as we should be. As females we have to overcome a lot of things in the military, we want to highlight the struggles we face,”

In her keynote speech, Perdomo shared with the roughly 50 people in attendance two toxic relationships she had during her time on a New Orleans military base.

“I tried to write the speech a week before this and I started getting flashbacks of everything that happened,” Perdomo said.

She explained how she and her first boyfriend had an on and off relationship which ended in her getting chased by him.

In her second relationship, her boyfriend raped her while she was asleep and gave her a sexually transmitted disease.

“I just wanted to show that female vets are resilient and that we have to try extra hard to keep up with our male counterparts,” Perdomo said.

Veterans’ Resource Center coordinator Derek Casanares said that the college has acknowledged veterans on campus for the holiday in the past, but this is the first time that it has done something for women veterans specifically.

“Their contribution is important because they have risked their own lives for this country. We have to acknowledge that they were willing to serve in the military,” Casanares said.

In Dr. Hollis’ speech, he spoke about how it is difficult for soldiers to come back from service and assimilate back into civilian life.

“My son served in Afghanistan and once he came back I visited him. While I was there, I noticed that he would just stare out the window. That’s when I noticed something was wrong with him,” Hollis said.

He said that it’s hard to mix military service and civilian life together instantly.

“We, as military members, are used to doing things well all the time. It’s difficult to change (us). But we all resist openly to leaving service,” he said. “We want to serve well, but we need some downtime after we arrive back from combat.

“We, as civilians, have to give them (veterans) space and special attention,” Casanares said.

“A lot of us are traumatized by our experience, even if it wasn’t in combat. Just being sensitive and helping veterans find the many resources available to them is helpful,” he said.

Casaneras said that just by talking to veterans about their experiences in the military is helpful.

“I think people have to be patient with them. They always think that you’re strong — which we are — but the transition to civilian life makes us weak.”

“We are good at hiding things,” Perdomo said.