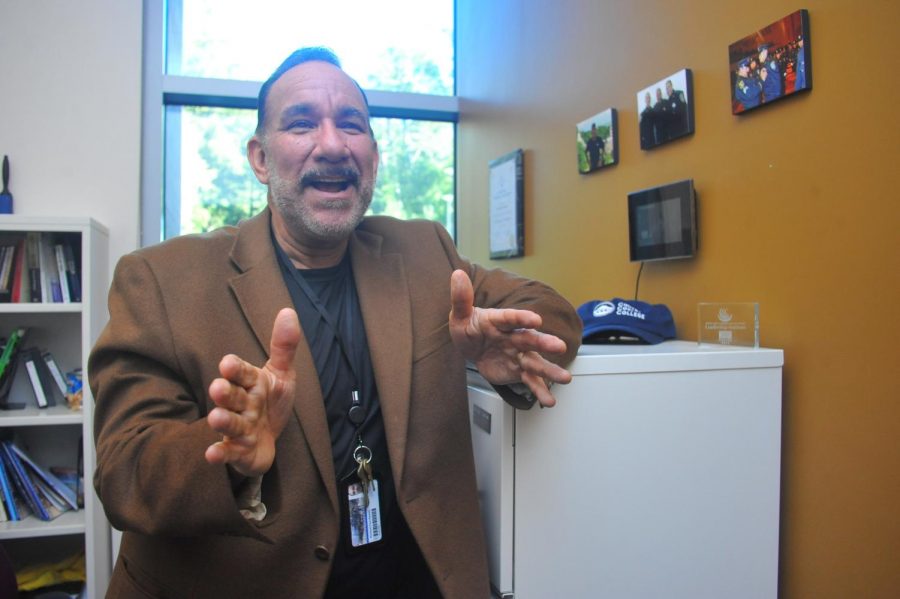 Rick Ramos explains the position he will take at Merritt College in Oakland starting next semester. Ramos also recalls his many experiences working at Contra Costa College for 30 years as he stands in his GE-113 office on Friday.

Dr. Rick Ramos is flipping through papers at the bottom of his filing cabinet pulling out photographs, the kind you actually get back from the developer at a drugstore. The hard copy photos are moments from his 30 years working here at Contra Costa College.

The walls of his office are covered with more framed photos and plaques with police badges on them. He pulls a photo off the center of his desk. “This is my wife,” Dr. Ramos said with a big smile. “We met when we were both students here at CCC in chemistry class and we have been together now for 37 years.”

Dr. Ramos is leaving CCC to take a new position as dean of allied health and public safety just down the road at Merritt College in Oakland. The position is an exciting new step in Ramos’ unique career.

“I think I’m ready,” he said. “The change is really bittersweet. I feel some remorse, but it’s not the last that CCC has seen of me.”

Ramos grew up in Richmond and has raised his children here in the local community.

“His expertise from being a person that grew up in the area has been hugely important because he understands what students in the area have gone through,” Mayra Padilla, CCC dean of institutional effectiveness and equity, said.

As an ex-Berkeley police officer and with nine years on the Richmond Police Commission, Ramos has quite a few stories that he will launch into at the drop of a hat.

“He keeps it real and tells us good stories. I really respect him,” CCC administration of justice major Minerva Duran said.

The role serving on the Richmond Police Commission came to Ramos because he was studying police oversight for his master’s degree at Cal State-Sacramento. A Richmond city council member nominated him for the position.

“I served as chair of the commission for over half of those nine years,” Ramos said. “I sincerely hope that the work we did during that time has contributed to the positive transformation that RPD has gone through.”

As the chairperson of the public safety department at CCC and as a professor of administration of justice with such a lengthy tenure, Ramos has crafted much of the department’s curriculum and has pushed to create unique programs for those interested in careers in law enforcement.

“He always has a very detailed educational plan,” said Dupre Winston, one of Ramos’s students who has not yet chosen a major.

CCC police aide Juan Flores said, “Work-wise and school-wise, he really knows how to help you develop a career path.”

“Part of the reason that he is so effective here is that he is really good at seeing how systems align. He was able to create curriculum that could help bridge students to other institutions,” Padilla said.

Many of Ramos’ students appreciate that he has experience specific to being Latino in law enforcement.

“I just appreciate learning this material from a person of color,” Duran said. “I’ve noticed that they (POC) have a certain perspective on law enforcement that I think is important, especially here at CCC.”

“When students have professors who look like themselves they do much better because they can relate and can learn step-by-step from someone who has navigated the system successfully,” Padilla said.

Ramos said, “I struggled as one of the first Latinos in the Berkeley Police Department. I was not accepted, and it was turbulent for me at first. I put out a message that I was not going to put up with the community being mistreated and I caught a lot of flak for that. When I became a supervisor, the dynamics (in the department) really changed.”

Since then he has wanted to help students who look like him get great jobs, he said.

“There is a huge wave of retirement in public safety. This is a great opportunity for the kind of students who take my classes. Especially since most of them are bilingual.”

Ramos will continue teaching upper division courses at Cal State-East Bay along with the new job at Merritt which is a management position.

Within the next five years he said he plans on running for the Contra Costa County Board of Directors.