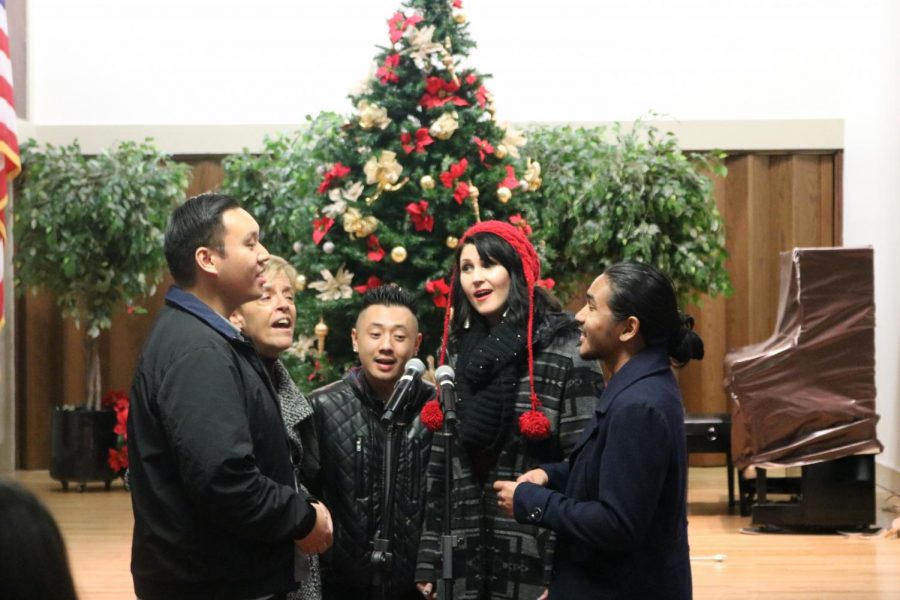 SAN PABLO — The city of San Pablo had its annual Tree Lighting at City Hall Friday from 6-7:30 p.m. with well over 400 people in attendance.

The event is the city’s second largest of the year, next to its 4th of July celebration because they’re one of the few cities to still have fireworks.

The event began with a small but soon long line to the entrance.

The attendants were greeted by local officers and given a survey where they could get a panda stuffed animal upon completion.

As attendees entered, there was free hot chocolate and popcorn passed out by the volunteer staff.

Many, if not all, of those that worked on the event were volunteers or city officials.

The volunteers were members of the community, as well as those who work for the city of San Pablo

Chris Lacayo works for the city as a recreation leader.

As a recreation leader, he coaches youth, helps to coordinate and supervise community events.

During the event, he was a volunteer where he passed out the popcorn, cleaned and made himself available for any help those attending might need.

Most of the attendants were families with children, couples and new members of the community.

Joonpyo Hong and Lupe Cruz, students at Contra Costa College, attended the event for the first time this year.

“I have lived in San Pablo for a few years but have never been to the event before. I wanted to see what it was like,” Cruz said.

Hong also brought his camera to take pictures of the event.

There were a ton of fun things for children to do like making crafts and meeting Santa. Children could also meet Mrs. Claus and of course view all of the Christmas lights.

The line for both meeting the Claus family and for making crafts seemed to run across the length of the City Hall building.

The children going to see Santa were visibly excited. There were no screams like in a mall, only a bunch of happy faces waiting to take their picture with Santa and Mrs. Claus.

The children received candy and stickers on their way out.

In the middle of the square, the Jazzology vocal group from CCC sang holiday songs like “Rudolph the Red-nose Reindeer,” “Jingle Bells” and the “Hallelujah Chorus.”

People gathered around them to sing and take pictures.

The whole square began to fill up as more and more families entered for the tree lighting.

Cecilia Valdez, mayor of San Pablo, city council members and other city officials greeted everyone before lighting the tree.

Mayor Valdez gave a speech in Spanish and English about the importance of the community coming together and making sure that everyone was having fun at the event, especially the kids.

Once the tree was lit, the crowd erupted in joy and amazement followed by a second Jazzology performance.

The hot chocolate and popcorn quickly ran out after the tree lighting, as more and more attendants filed in.

The front desk ran out the stuffed pandas that they were giving out in exchange for participating.

As the event wound down, people began heading inside for more music.

City council member Paul Morris was among those waiting for the next performance.

“It’s getting bigger and bigger each year. Events like this are important for bringing our community together,” Morris said.

He said the new City Hall groundbreaking will take place in January and that next year’s tree lighting will be at the new location December 2018.

The event concluded with several musical acts from various schools.

An a cappella group made up of elementary school students performed with a middle school band, both receiving a resounding applause and plenty of reaction from the audience.

The event ended with a performance by Jazzology, which will also perform at La Strada restaurant on Monday with other groups from the CCC music department.