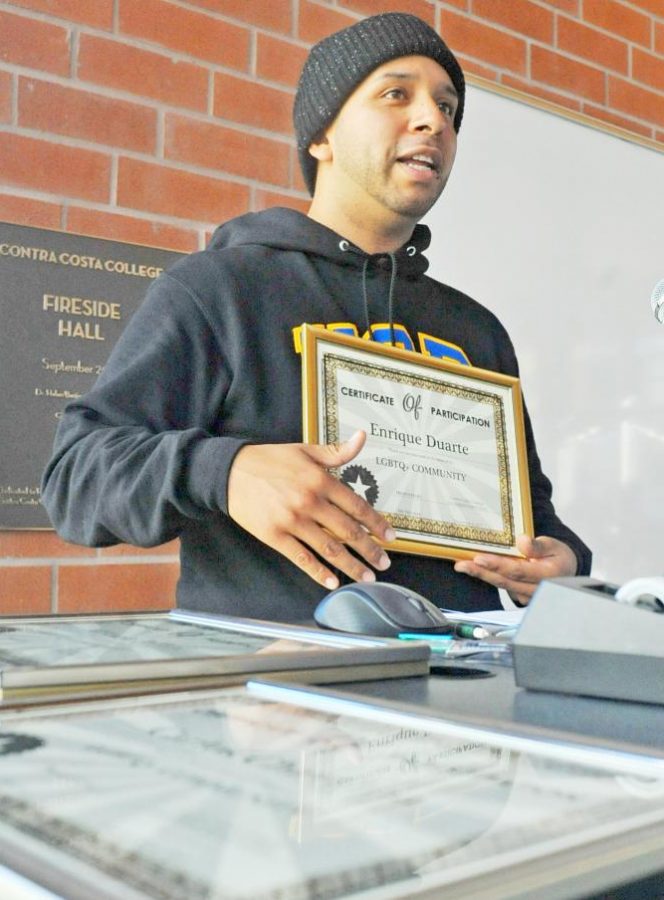 Alphabe+ Club President Enrique “Kike” Duarte gives a speech as he holds up his award given to him by the Associated Student Union during LGBTQ+ Appreciation Day in Fireside Hall on Monday.

Three students and three faculty members were honored for their contributions to the campus community through advocacy for LGBTQ acceptance during the LGBTQ+ Appreciation Day event in Fireside Hall from 12:30-1:30 p.m. on Monday.

Each honoree represented a different group fighting for LGBTQ acceptance, such as Michael Santone’s influential articles as a reporter for The Advocate, Pollard and Duarte from the club and student government side and Van Hattum, Alvarez and Chavarria from the faculty and administration front.

A general theme from the award winners in attendance was the continued fight for inclusion. While each recipient expressed happiness for the steps that have been taken to make Contra Costa College a more inclusive campus for LGBTQ students, they each said this was just the beginning.

Duarte said there is a lot more work to do.

He said he wants the classes to use more inclusive language within their curriculum and end student discrimination due to identity, which still happens.

“Having a more queer academia on campus is important,” Duarte said.

Alvarez said faculty plays an important role in the dynamics on campus such as crafting curriculum and ensuring students pass their coursework and move on to bigger things.

With such an important role, administrators can be a strong force in creating a more inclusive environment.

“Having more faculty under the LGBTQ umbrella can lead to mentorship. We need to push for an equity agenda and add inclusive works, like books, within the curriculum,” Alvarez said.

Pollard is also the vice president of the Alphabe+ Club along with her duties as an ASU senator. Despite usually being quiet and not vocal on topics, she said joining ASU was a big part in her becoming more vocal.

She also credited a particular event in her junior year of high school with her learning to speak up.

Pollard said while in class a student said if he had a gay son he’d beat him and kick the son out of his house. Pollard broke her usual quiet demeanor to speak up and tell the student what he said was wrong and made him listen.

“If you stay quiet, people are going to keep doing what they do, and they won’t understand,” Pollard said, “I had to start speaking out on things.”

VanHattum had the longest speech of the day, sharing her experiences with her own sexuality and history of advocacy. Her strongest point was pushing for intersectionality when approaching LGBTQ advocacy.

Intersectionality is the effects of different forms of discrimination and how they intersect.

VanHattum represented not only the faculty’s role, but also a more experienced mindset, reaching upon the years in her life as an advocate.

Pollard said the Alphabe+ Club could still make a larger impact on campus.

“I want everyone on campus to feel safe and accepted and tell people ‘it’s OK and you aren’t invalid because of who you are,’” she said.

ASU Vice-President of Clubs Astrid Pumarica said appreciation events are important for recognizing members on campus that contribute in ways that aren’t clearly evident to the general community.