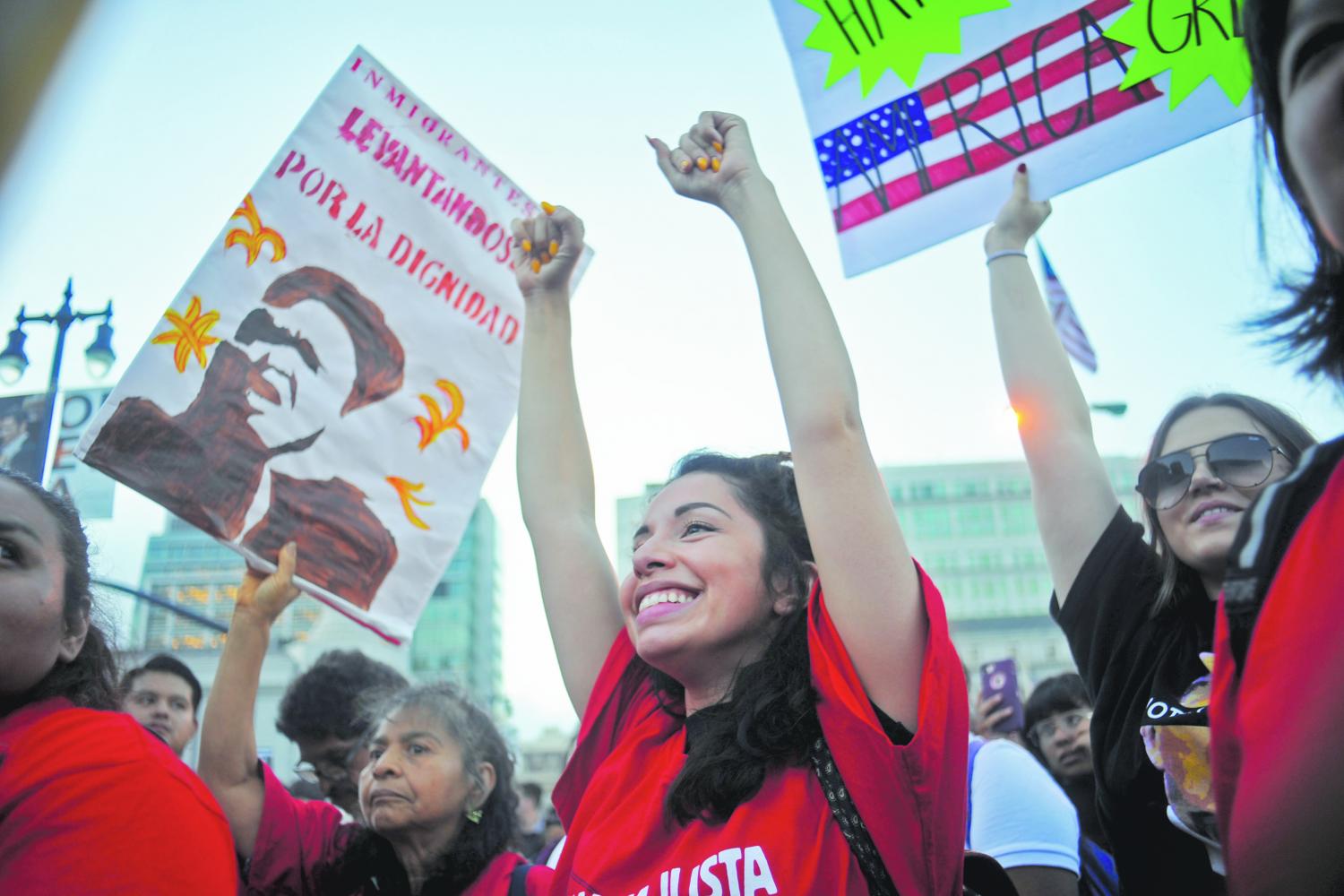 Oakland resident Yesenia Veamatahau holds her fists in the air as a speaker performs an empowering poem during the closing rally of an impromptu march to City Hall in San Francisco on Sept. 6.

On behalf of Alsup’s order, DACA recipients who did not renew by the Oct. 5 deadline can now submit their applications to United States Citizenship and Immigration Services (USCIS) for renewal. The option is also extended to those whose applications expire in the future.

“I think the judge’s decision to block Trump’s actions is good. It seems that all the activism is having an effect. These are some important temporary legal victories that can snowball into greater victories,” Contra Costa College La Raza studies professor Agustin Palacios said.

“At the same time, I can’t even imagine what DACA folks are going through, with all this uncertainty.”

CCC is home to more than 200 undocumented students and DACA recipients affected by the termination of the program, according to Contra Costa Community College District statistics.

With the goal of supporting undocumented students on campus, Palacios said a group led by campus professors, going by the name of “Dreamers Alliance,” was created last semester.

Palacios said during the group’s meeting they have been discussing possible ways to protect undocumented students and DACA recipients on campus.

Included in their strategy were plans to create a quick response team, having legal aid and creating a permanent space on campus with resources for students, Palacios said.

When Alsup gave the order on Tuesday to temporarily block Trump’s plans to end DACA renewals, he indicated that the federal government must adhere to the same terms and conditions that they did prior to the Trump administration’s attempt to phase out DACA on Sept. 5, 2017.

Those terms and conditions include allowing DACA applicants to renew their work permit, but no new applications will be taken by USCIS from applicants who did not have DACA in the past. Advance parole, which made it possible for DACA recipients to leave the U.S. with urgent humanitarian, educational or employment purposes, without losing their status is not part of the order according to a United States District Court document titled D. Scope of Provisional Relief signed by Alsup.

Initially, when Trump pushed to end the program back in September of 2017, California, along with 15 states including state attorneys from Connecticut, Delaware, Hawaii, Illinois, Iowa, Massachusetts, New Mexico, North Carolina, Oregon, Pennsylvania, Rhode Island, Vermont, Virginia, Washington and the District of Columbia sued the Trump administration because the plan to rescind the program was deemed “unconstitutional.”

Since Sept. 5, 122 people per day have lost their work permits and the ability to legally earn a living in the U.S., according to a report from Center of American Progress.

La Raza Studies Luis Ledesma said he remembers feeling defeated and vulnerable to a possible deportation and family separation when finding out that DACA had been rescinded.

Although allowing people to renew their two-year work permit is a relief, Ledesma said DACA has been beneficial, but it’s temporary.

“We need to focus more on the clean Dream Act to pass permanent immigration reform.”

The clean Dream Act is a bipartisan legislation that would create a path to citizenship for DACA recipients and those who came to the U.S. at an early age.

It calls for no additional border security, no deportation or criminalization of undocumented communities, no detention centers and no mandatory E-verifications which allows businesses to see if employees are authorized to work legally in the U.S.

Trump gave Congress until March 5, 2018 to come up with legislation that offers a permanent solution for Dreamers upon DACA’s termination.

Congress has until Jan. 19 to decide whether they want to pass the clean Dream Act or risk a government shutdown, according to Democratic lawmakers who have said they will not support any government spending bill unless the fate of DACA recipients is secured.

The lives of 2.1 million immigrants and nearly 800,000 DACA recipients in the U.S. is now in the hands of Congress.

CCC nursing major Virginia Beltran said, “Finding out that (my friends’) time in the U.S. was coming to an end was heartbreaking because they did not choose to come to those U.S. they were brought by their parents, so they can have a better future — and they did.”

Although Beltran was not personally affected by the ongoing fight to keep DACA, she has friends and family whose lives depend on decisions to come on Jan. 19.

“I come from undocumented parents, and I know how hard it is to make a living for myself and my siblings because I have lived through it with them.”