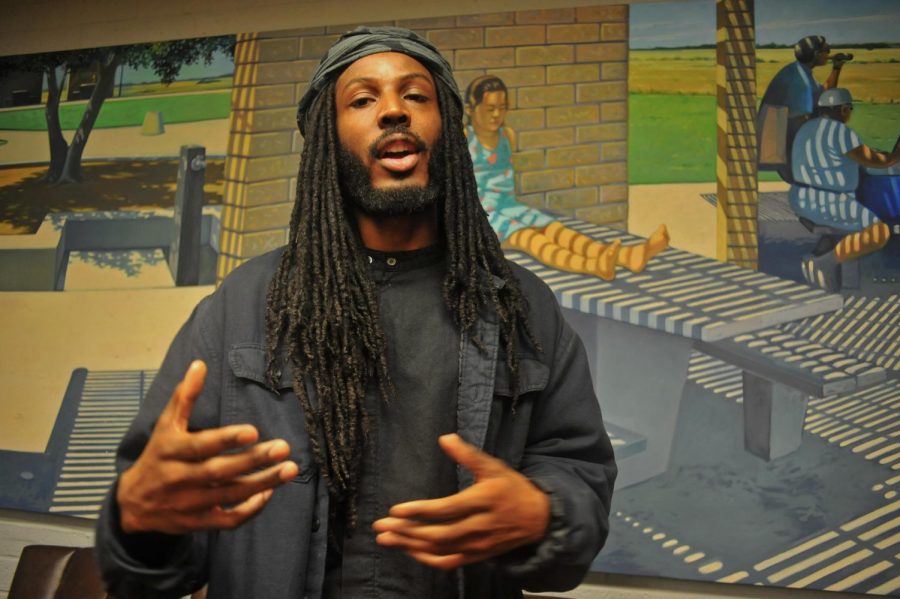 Dante Clark discusses the main concept of the documentary "Romeo is Bleeding". Clark discusses what was going on in his mind as a group of young people and himself were documented creating a modern version of the play, "Romeo and Juliet".

In a Bay Area city where families are torn apart by street wars between opposing neighborhoods, a talented young poet interprets his city’s conflicts with toxic gun violence and brings it to life on the stage with a modernized twist on the classic play, “Romeo and Juliet” by playwright William Shakespeare.

Portraying the poet’s passion to paint his hometown story of endless violence and its pledge for change, the 2015 documentary “Romeo Is Bleeding” produced by Hip Hop mogul Russell Simmons follows Donté Clark’s journey as he writes, casts and stages his urbanized reimagining of the famous Shakespeare love story.

Directed by Jason Zeldes, the award-winning film begins with Clark sharing his initial thoughts on the Shakespeare classic when he was introduced to it at the age of 15. “‘This is weak, it’s boring. I don’t see how this relates to me.’ That was my attitude,” Clark confessed to the camera. “I was 15 then, I’m 22 now it’s like ‘damn, this is my life.’ This is what’s going on in my neighborhood right now.”

In the following scene, Clark, a resident of unincorporated North Richmond, asks a group of roughly 20 young locals to step forward if they had ever lost someone to gun violence. All but two moved forward.

In midst of the chaos that continues to deteriorate the cohesion of the once-thriving city, Clark uses the oft overlooked talent of Richmond’s impoverished but promising youth with the help of the local group RAW talent to stage his own hometown version of Romeo and Juliet.

In the film Clark draws comparisons between the famous Shakespeare play to the clashes that transpire in the streets of Richmond that sadly often end in violence.

“(Romeo and Juliet) that is our story,” Clark said in the film about the timeless play. “It’s just told in Verona. In a different language, a different time period.”

The film takes viewers on a tour through the most dangerous parts of the city as local residents and police officers tell their stories and the ones of those killed in street violence fueled by gang warfare between its North and Central Richmond neighborhoods.

“Romeo Is Bleeding” dives deep into the violent gang culture that plagues the city’s streets in hopes to start a dialogue about the issues that causes this violence to thrive.

The documentary uses a patchwork of interviews, cutscenes and raw footage to tie together the vast number of issues that continue to wane the ‘City of Pride and Purpose,’

This doesn’t only include street beef and gun violence but the health effects from local air polluting companies and the lack of economic opportunities in the inner-sections of Richmond.

Snippets from the play and original poetry from local residents are also sprinkled throughout the film.

Although Richmond saw its lowest annual homicide rate on record since 1973 in 2014 with only 11 murders reported, that tread is beginning to rise yet again.

21 murders were committed over the span of 9 months in the city’s limits during 2016.

“Romeo Is Bleeding” is an honest representation of the woes of Richmond and what some of its residents are doing to creatively promote change in their communities. The documentary is currently available on Netflix.