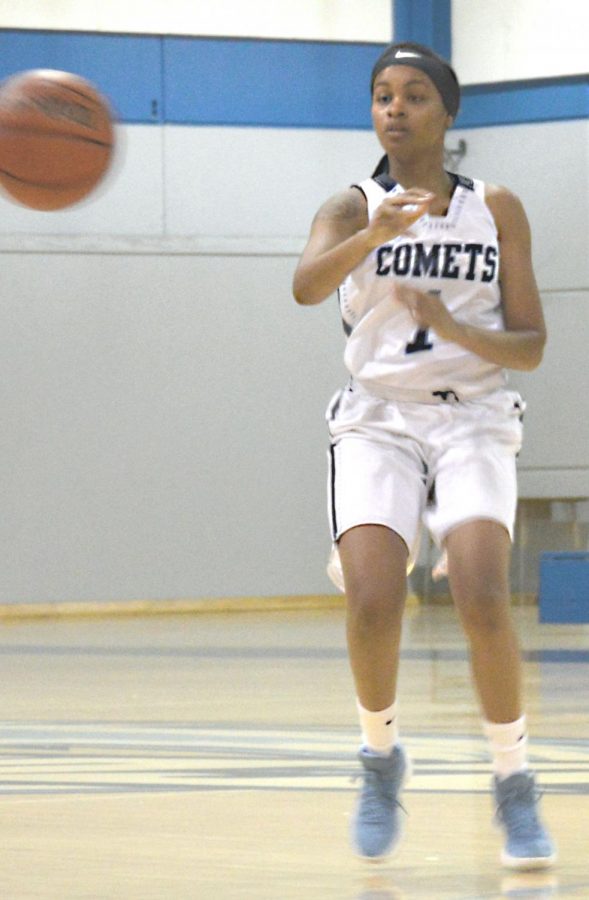 Comet forward Krisyle King passes off the ball to a team mate, as Eagles defenders rush in during Contra Costa College's loss to Laney College 69-62 in the Gymnasium on Jan. 24.

After trailing by as many as 14 points, the women’s basketball team (4-17, overall and 2-9 in the Bay Valley Conference) fought back to tie the game but eventually failed to beat Laney College 69-62 Jan. 24 in the Gymnasium.

In this, CCC’s second Bay Valley Conference game against rival Laney College (10-10 overall and 8-3 in the BVC), the Comets impressed with a much better performance than in the first game back on December 27.

“When we played on their home court I believe we got blown out by 20 points,” Comet guard Jameelah Hanif said. “I think we played well, we committed less turnovers than in the previous game against them,” she said.

Hanif lead the Comets in scoring with 25 points. The only other Comet to score double digit points was forward Jahna Maramba who chipped in 12 points.

On the other hand, the Eagles had a much easier time getting players to open shot opportunities. The availability of open shots eventually led five Laney players to double-digit scoring totals.

“I don’t think we forced them into many turnovers, they were just playing fast and when you play fast sometimes you make mistakes,” Laney coach Ron Williams said.

Even though CCC committed 26 turnovers they still managed to force the Laney players into making bad decisions while in scoring position which kept the game close.

Comet coach Vince Shaw said that the turnovers that his team committed were ones with good intentions, but still resulted in negative plays.

The Comets trailed by 14 points deep into the second quarter but began to improve defensively and score shots from the perimeter.

Williams said that they were able to stretch the Comet defense when there weren’t options in the paint.

“We have a few good shooters that can make three pointers,”he said.

The Eagles led the Comets 38-26 at halftime.

To begin the second half, CCC was able to force four turnovers in the first three minutes of the third quarter but failed to score many open fast break opportunities.

Laney guard Monae Seals led the emotional charge She knocked down big shots in important stretches of the game for her team making four out of nine attempts from behind the arc.

“She hit a big three when it was 61-60 in their (Eagles)favor, that was a big momentum swing,” Shaw said. “We’d go right back down the floor and commit a turnover, but you have to give Laney credit for making those plays,” he said.

Hanif said that she was happy with how CCC played and was able to keep the game close.

“They (Laney) thought they were going to come in and get an easy win like in the first game,” Hanif said.

Shaw said he was happy with how his team was able to fight back and stay in the game until the end. He said that the team didn’t let Laney get all their points in the paint like in the first game.

“At least they didn’t cut us up like last time,” Shaw said. “We didn’t just let them drive to the basket. I am proud that they (CCC) gave themselves a chance to win the game.”