Foul troubles early on knock Comets out of rhythm 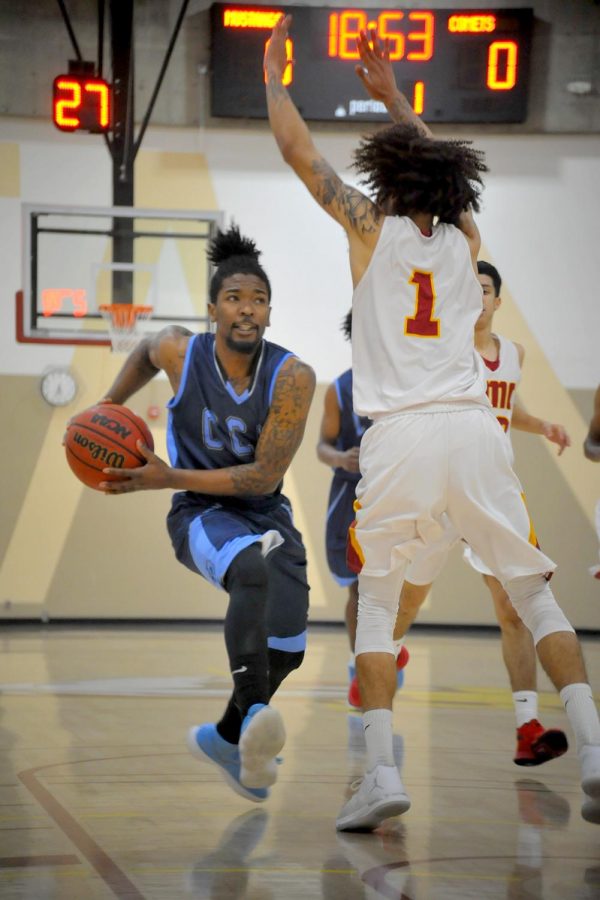 Comet player takes a contested layup during the Comets’ 72-62 loss at Los Medanos College on Friday.

PITTSBURG — Turnovers, early foul trouble and the Mustang (13-9 overall and 6-5 in the Bay Valley Conference) zone defense were huge factors in the men’s basketball team’s 72-62 loss to Los Medanos College here on Jan. 26.

Contra Costa College (12-10 overall and 6-5 in the BVC) started the game sluggishly and with players getting into foul trouble in the first 10 minutes, the multiple substitutions made it difficult for the Comets to establish any rhythm.

“We couldn’t really get a rhythm because of the stoppage and rotation,” coach Miguel Johnson said. “It’s a young group. They have to understand how to execute. A lot of that is about our substitutions and putting guys in different positions. So we kind of sputtered offensively.”

When there is foul trouble, it takes the energy out of the game and it results in some players playing tentatively.

“We saw everything going their way,” he said. “The fouls made us start settling for jump shots instead of attacking the basket.”

The Comets, after putting themselves in a tough position, were forced to constantly make lineup adjustments.

“The inconsistent foul calls make it hard to get a feel for the game,” forward Demond Washington said. “It’s up to us to take the game out of the referees’ hands, so the unfavorable calls won’t affect the outcome of the game.”

Despite the team’s disadvantage, CCC still managed to keep it close finishing the first half trailing just 34-30.

“I don’t think we understood the urgency of the game,” Johnson said. “Were a young team. Guys have to figure out what conference play means.”

At tipoff, both teams had identical 6-5 BVC records after playing 11 games.

In the second half, LMC continued its game plan of running a zone defense against the Comets and closing out on CCC shooters.

Washington said although the team prepared for zone defense and know that some teams will throw it at them, they don’t expect them to play it for the whole 40 minutes of the game.

The Mustangs’ defense made some players uncomfortable and took them out of their respective games.

Johnson said the Comets allowed the zone defense to take them out of being aggressive.

The team struggled to get on track offensively since outside shots weren’t falling and tried forcing contact by attacking the basket. The effort failed to get the team any additional trips to the free throw line.

Late in the second half, the Comets tried for a final comeback, after forward Trevon Silas got past Mustangs Demarie Smith and Andrew Hall for a breakaway dunk to cut the LMC lead to 68-62 in the final two minutes.

But then LMC took advantage of Comet turnovers, converting them to points, to put the game out of reach.

“The turnovers played a big role in our loss because they scored a lot off of turnovers,” Wright said.