Squad blown out in conference play 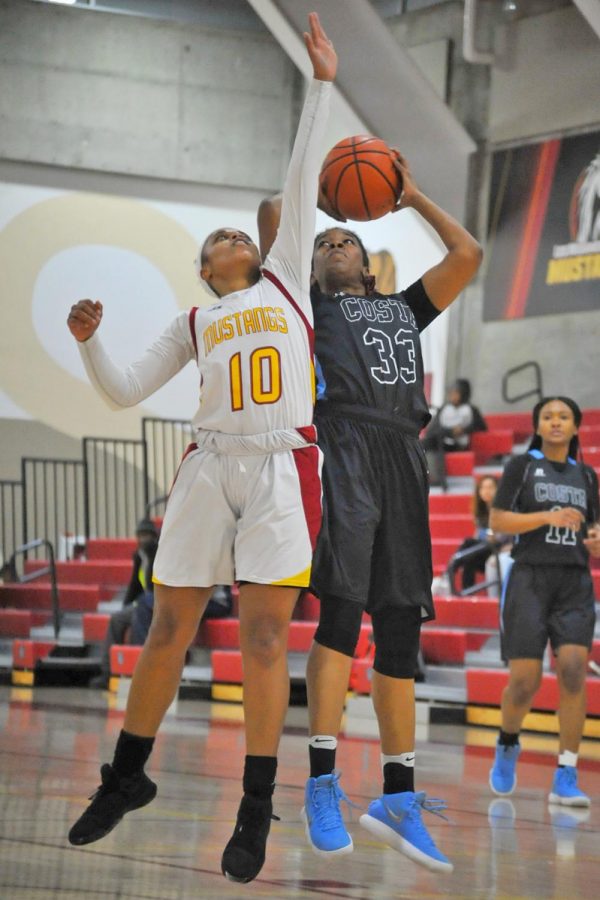 The Comets established an early lead against the Mustangs (15-7 overall and 9-2 in the BVC) in the first quarter, but that quickly changed after they started committing turnovers.

Coach Vince Shaw said the team has to sustain consistent effort — what its been searching for in these last few games.

Players for CCC also knew that there were things that they could have done better.

Play was stagnant from the opening tip for the Comets.

“We were stagnant. We didn’t have good defense, and offensively we didn’t move,” Crawford said.

The Comets return to action tonight against Solano Community College in the Gymnasium.

In a play indicative of the Comet evening, point guard Kristyle King looked to make a routine entry pass to forward Kianie Williams. The Mustangs were able to steal the ball, get out on the break forcing a two-on-one situation for Mustang guard Adorah Buggs to score.

Comet forward Jahna Maramba said some players have anxiety during games that lead to bad passes and turnovers.

“We’re a young team and it’s still new for some of the players to play basketball at the collegiate level,” she said.

CCC trailed the Mustangs at halftime 46-28.

Coming out of the locker room the Comets looked to make adjustments to reduce turnovers.

Maramba said some of her teammates stepped up and came out of their comfort zones which helped contribute in creating plays.

Late in the third quarter, Comet players began making plays for each other and aggressively attacking the rim.

The renewed sense of urgency gave them more opportunities to get points from the free throw line.

The Comets got foul calls but did not take advantage of free throw attempts that could have helped cut into the lead.

“We had too many empty possessions,” Shaw said. “We would get the right play call, get the ball where we want it to be, but we didn’t convert or execute the layup and didn’t knock down the free throws.”

The Comet defense couldn’t slow down the Mustang offense for sustained periods of time. LMC would attack the basket, then pass to an open shooter before the defense could recover.

“Our coach does a great job coaching, but our players just didn’t execute his defensive game plan for this specific game,” Maramba said.