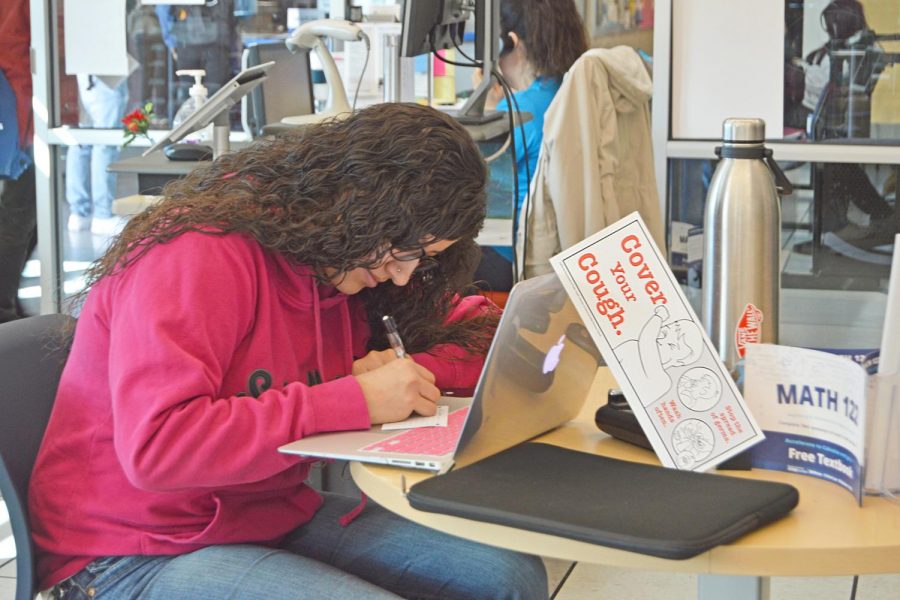 ABOVE: A student works on her laptop as a CDC flier which recommends practicing effective flu precautions leans on it on Jan. 22.

Administrators at Contra Costa College are starting a campaign to combat this year’s flu season that has taken the lives of 29 people under the age of 65 in the greater Bay Area region.

“We’ve posted information on our social media sites and have information basically everywhere on campus. We have received positive reaction from the community for posting this information for our students,” CCC President Mojdeh Mehdizadeh said.

The red and white signs that have been placed around campus give students instructions on how to cover their cough and wash their hands effectively.

Flu season began in October 2017, but right after the holidays the amount of flu cases skyrocketed, head of the Centers for Disease Control and Prevention influenza division Daniel Jernigan said in an interview with the Washington Post.

This was due to ill children returning back to school campuses.

CCC Athletic Trainer Michael Jackson said regardless of the heightened concern, people should always take precautions when dealing with the flu.

“Standard precaution should be taken. It’s important to emphasize a good hand washing technique,” he said. “If anybody has symptoms of the flu they should be isolated from people who are asymptomatic.”

The normal preventative precautions haven’t been enough to stop the spread of this current flu virus.

Jackson said that cleaning every desk, surface or handle that is often touched by people is an extra preventative measure that has to be taken during the flu season.

CCC Vice President Ken Sherwood said, “If this outbreak worsens, we will send a mass text message to students. But we are limited to the number of mass texts we can send out, so it would have to be an emergency. If students experience any kind of flu symptoms, or those of any other illness, they can report to any office and let an administrator or professor know.”

The CDC and Occupational Safety and Health Administration (OSHA) recommend that any civilians or workers should stay home if they are experiencing flu- like symptoms.

Mehdizadeh said she told professors to be thoughtful of the needs of their students.

“We (faculty and staff) potentially can be experiencing an illness. We don’t want to get our colleagues or students sick,” she said.

Mehdizadeh highlighted the importance of everybody doing their part to stay healthy.

Even with all the extra measures being taken by administrators, students are still encouraged to not share food and beverages.

Also, washing hands after touching your face or before and after every meal to kill any dangerous germs is highly recommended by the CDC and OSHA.

Jackson said that anybody who works with the public should get a flu shot to protect themselves.

“Regardless of the custodial practices I still try to go and clean the training room just to prevent the spread of germs,” he said.