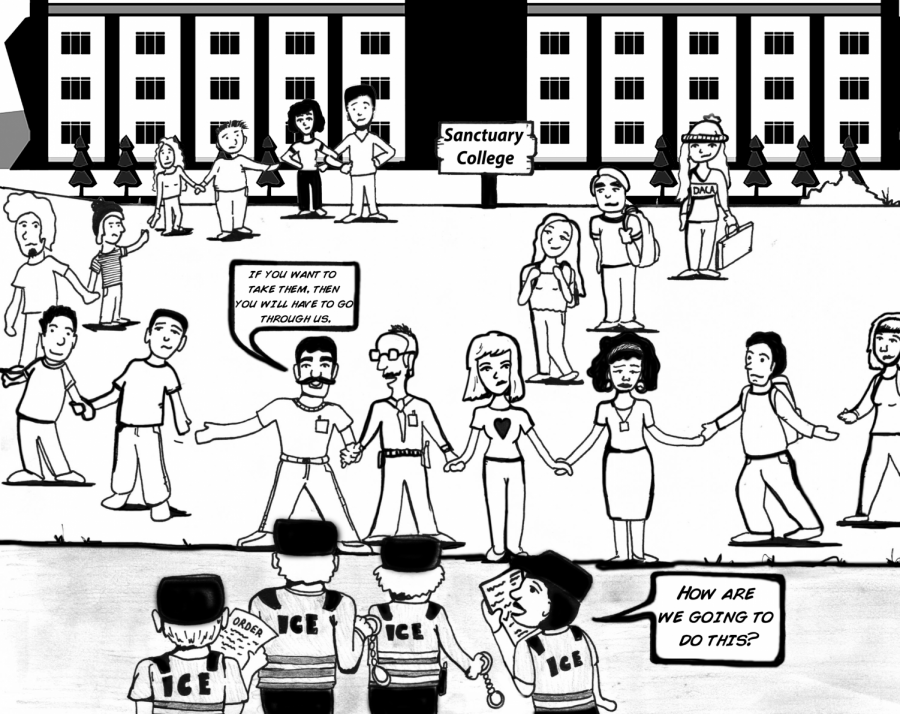 In the wake of recent threats by the federal government to conduct sweeping immigration raids across Northern California and the Bay Area in general, civic leaders and state employees have vowed to stand up to the impending menace.

On Jan. 23, Diablo Valley College President Susan Lamb sent an email to all her campus employees urging them to reaffirm their commitment to Deferred Action for Childhood Arrivals (DACA) students.

In this political atmosphere, if convincing DACA students that you are on their side is still where you are socially, that’s OK. All progress is progress, but at CCC we expect more.

Since CCC President Mojdeh Mehdizadeh has consistently expressed written support of undocumented students, her next message should be a call to action. She should urge her employees and students to collectively form a human shield encircling our undocumented classmates to prevent them from being ripped away from their families, homes and everything that they have ever known.

The demographics of sister college DVC may illuminate why some of the minority students may still need reassurance on their Pleasant Hill campus.

Out of 228 academic, tenured or tenure- track DVC professors, only 11 percent are Hispanic, on a campus with over 2,000 students that identify as Hispanic in its student body, according to Datamart.

At CCC, 15 percent of its professors with the same classifications designate themselves as Hispanic, which is still low considering its 40 percent Hispanic student body. However, the campus does consistently show overt support to students coping with immigration issues.

Despite the forums, marches, counseling assistance and news coverage dreamers receive on campus to promote the idea that CCC is a sanctuary space, the precipice many of our friends and loved ones face means stronger commitments need to be forged.

If Immigration and Customs Enforcement (ICE) agents come to CCC no email or district doctrine will stand in their way.

Administrators should form the first line of defense when it comes to protecting students on campus.

CCC Vice President Ken Sherwood said that he would be willing to put his own freedom on the line, in the form of a human blockade, if ICE agents attempted to infringe on his student’s constitutional rights.

Other faculty and staff on campus have mixed feelings about forming a human wall of defense to keep students from the grasp of federal agents.

Some professors welcome the idea and even hope the plan becomes a topic of discussion surrounding civil disobedience at next month’s Dreamers Alliance Conference.

Other faculty and staff express the opposite sentiment, saying nobody has ever sacrificed themselves for them or any of the causes that they believe in, so the dreamers will have to sacrifice for themselves.

Without a literal underground railroad to shuttle students to safety, little else can be done to protect students while on campus, other than the campus community’s numerical advantage in the moment.

The strength of a united campus community is the only leverage that dreamers still hold.

Knowing that professors and classmates will actively work to help in what, for some, is the bleakest moment of their life is the only hope that some immigrant students have.