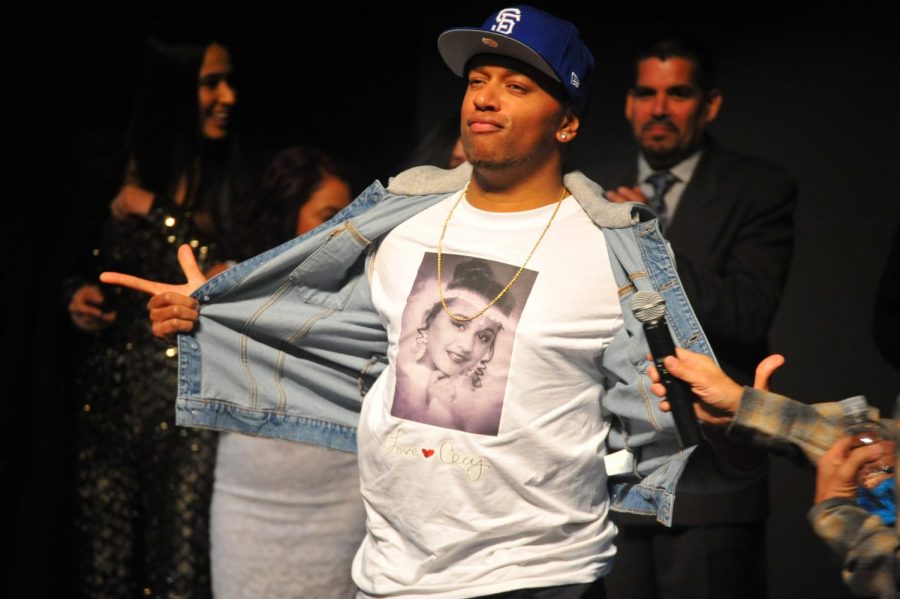 Director Jay Francisco Lopez shows off his shirt to the crowd filling up the Knox Center auditorium during the screening of "Love, Cecy".

Twenty-four years ago a young girl named Cecilia “Cecy” Rios was murdered in Richmond. After her murder the community at large came together to memorialize the ambitious girl who touched the lives of everyone she met.

Now, two decades later, in the sold-out John and Jean Knox Center for the Performing Arts, the community came together once again to remember Rios during screenings of the film “Love, Cecy” directed by Jay Francisco Lopez Friday and Saturday.

“I’m glad a lot of people want to know who she was and her story after 24 years,” said Lopez, a former Contra Costa College theater arts student.

The event had the somber tone of a memorial, but was also celebratory of Rios’ life and the person she was to those she loved.

Pictures of Rios lined the red carpet where dozens of people took pictures in front of a large poster for the film.

Her quinceanera dress was recreated and was there alongside an album with her childhood photos and excerpts from her diary.

Real life friends of Rios and her parents were at the screening taking in the film that memorializes and tells the story of the person they knew so well.

Rios’ cousin Norma Cabrera said the film was perfect in depicting how her life was, from her quinceanera to the tragedy.

“Watching the movie was like sitting there and seeing my cousin.”

The film followed the last five months of her life after her quinceanera, primarily her relationship with her troubled boyfriend Julio, played by Vince-Anthony Ramirez, and the impact she had on his life.

Rios helped Julio focus on his schoolwork and helped him deal with issues he had at home with his own parents.

CCC business major Erica Delgado was Rios’ friend. She said, “(Rios) really wanted to bring the best out of people. She found the good in people.”

As the screening began, there was a musical performance by Miguel Navarro, a local rapper and actor who plays Flaco in the film. He got the crowd on their feet performing a song in the film that’s a love letter to the city of Richmond.

After the film, a solemn feeling took over the theater. A performance by Martin Cantu of “Suavecito,” Rios’ favorite song, brought the crowd’s energy back.

Danny De La Paz, emcee and actor from “American Me,” said, “The story is not about how a girl was murdered. It’s a story about her. It’s about the kind of person she was, her spirit and the impact she had on people’s life with the short 15 years she had.”

He said he didn’t know Rios’ story prior to the film and he commends Lopez for having the nerve to portray this true story with honesty.

Others were familiar with the Rios story from growing up in Richmond.

Erick Montano, who plays Gomo in the film, said he remembers when the murder happened when he was a kid.

The actress said it was beautiful to see the community come out in such large numbers to support the project.

“This was a big tragedy and it shows me how people can come together through that,” she said.

The event closed with a question and answer session with questions varying from what it took to fund the film, to what camera it was shot on and how the actors prepared for the roles.

After the film, people stuck around in the Knox Center lobby to take photos with the cast and talk about the film with several “Cecy” chants breaking out.

Audra Cabrera said the film was touching. “She was a young girl in school with a good head on her shoulders. We focus on her great life and that part of the story needs to be brought out to everybody.”