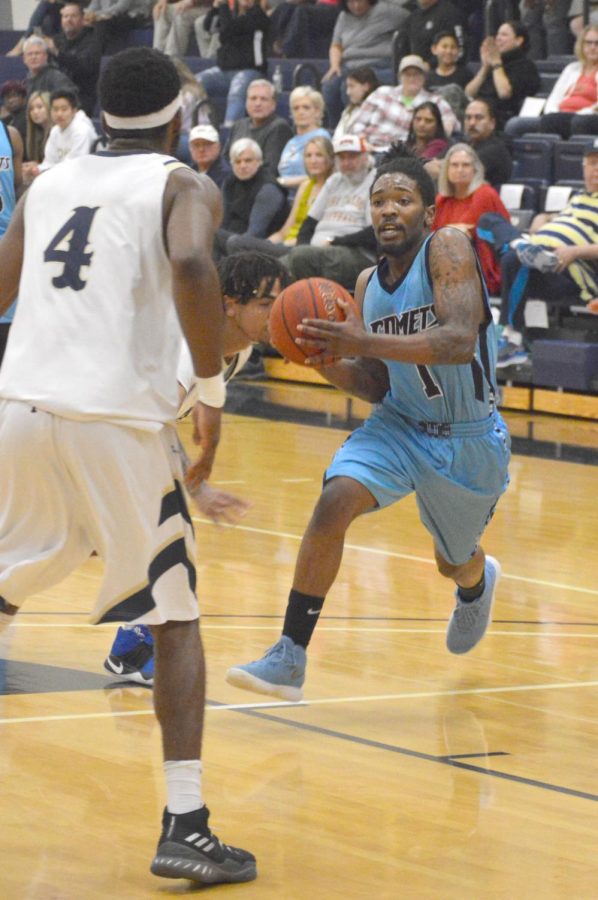 In a contested away game against red-hot Yuba College (19-11 overall and 11-1 in the Bay Valley Conference), the men’s basketball team failed to complete an epic comeback after trailing by 18 points at halftime to lose 80-75 Friday in Marysville.

Contra Costa College (13-11 overall and 7-6 in the BVC) was on its way to another lopsided conference defeat against the first-place 49ers, but the Comets turned on the burners in the second half and nearly pulled off the upset.

“It was all about our energy,” forward Jovell Vance said. “We were lackadaisical with our effort early on, but in the second half we really wanted to win. We came out and played some defense, made some shots and listened to our coach.”

Vance led the way for CCC on the stat sheet totaling 18 points, 5 rebounds and 5 assists while being on the floor for 30 minutes. He was one of five Comets who scored double-digit points.

“I think the 49er home crowd played a big part in the game. It was a pretty exciting place to play in, but I think we came out a little flat,” Comet guard Isaiah Attles said. “We weren’t used to that environment. That was definitely the most packed gym we have played in this season.”

At halftime, the Comets trailed Yuba 49-36. Yuba has outscored CCC in the first half of both games by a combined 33 points.

The Comets have played superb in the second half of contests this season and managed to outscore the conference leaders in that category.

Comet forward Demond Washington said that the team played Yuba much better in this game than it played in the first game.

Attles said, “We are a good team. All of us can play, so we knew we could play better than that first half we had. As a basketball player you just know when you have to turn it on,”

CCC committed 16 turnovers and had 17 assists.

Having that many turnovers and only obtaining one more assist didn’t help make the comeback effort any easier.

Vance said Yuba didn’t really force them into mistakes early on in the game. He said that it was a combination of bad Comet turnovers, bad shots and the 49ers running their offense effectively.

“In the second half we did the complete opposite from what we did in the first. We shot the ball well and committed (fewer) turnovers,” Vance said. “We really needed to win to make playoffs, so a moral victory doesn’t really mean anything at this point,”

With this loss, CCC’s playoff hopes are dim. They need a combination of themselves winning the remaining the three remaining conference games on the schedule and the teams above CCC in the standings have to lose out.

The Comets next game is Friday at College of Marin at 5:30 p.m.