Peak in crime impairs safety during first week of classes 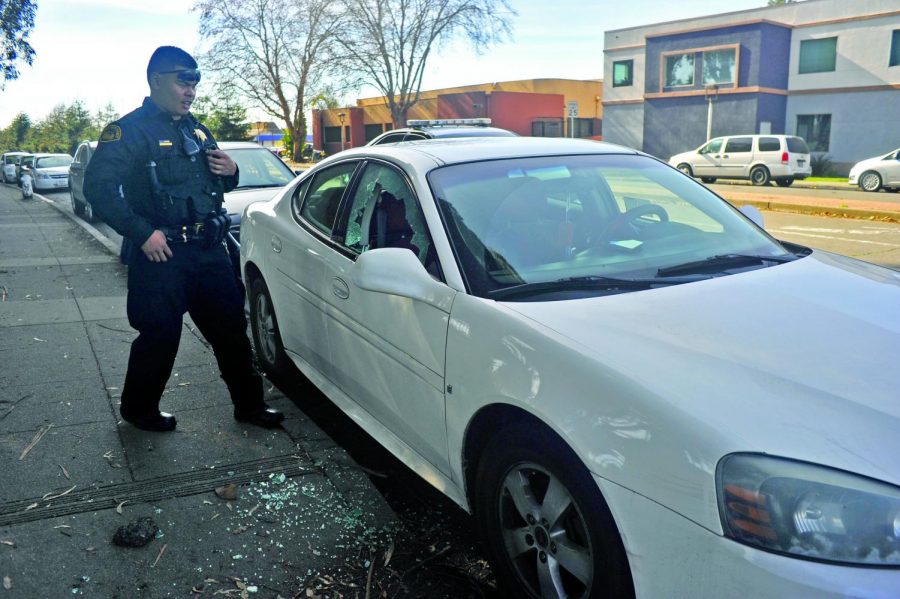 As each semester begins, campus parking lots are packed with the cars of students rushing to class, often with belongings left in plain sight of would-be criminals on the hunt for an easy score.

This Jan. 22, as the sun set after the first day classes for the 2018 spring semester, Contra Costa College Police Services posted a tweet informing students that there were three car break-ins that Monday, one near the center of campus and two in more remote areas of campus.

“We are increasing patrols campuswide,” Police Services officer Manny Valentin said. “But it’s hard to be everywhere at once.”

The tweet also contained a link to the campus safety tips page on contracosta.edu, which offers faculty and students pointers to avoid becoming a victim of crime while parking or while on campus generally.

Police Services guidelines, like using the buddy system, avoiding using digital devices while walking and reporting suspicious activity, are some of the ways to help students take responsibility for their personal safety and the security of their belongings while on campus.

Of the three Jan. 22 incidents, two occurred on Mission Bell Drive above the Early Learning Center and one was on campus near Library Drive.

All three crimes were reported as burglaries.

Since then, two more auto-involved crimes have occurred on campus in the same area of Mission Bell Drive.

The first was another auto break-in on Jan. 25 and the second was an auto theft that occurred on Jan. 29 just before 6 p.m.

Of the five incidents, three happened in broad daylight with two crimes being committed just after sunset.

Most of the burglaries that happen on campus occur on the perimeter of CCC and away from the common pathways that students take to class.

Students can often be confused as to what parking spaces are monitored by Police Services.

San Pablo Police officers patrol Mission Bell Drive behind the bleachers on the football field up to the intersection with College Lane. The remaining portion, Campus Drive, which extends through the Bus Transfer Center and around the upper portion of the campus, is the jurisdiction of Police Services.

Little can be done to halt what can be seen as a crime of opportunity, but CCC students believe more notification can be done to give the campus community more of a heads-up during a spike in criminal activity with tips on how not to become the next victim.

Other than word of mouth, many students, who don’t follow CCC on social media had no idea the thefts had even occurred.

Some students believe a more robust notification system should be used to update students of campus incidents in hopes of increasing the level of awareness dedicated to student safety and security.

“I do believe that students should be alerted when these incidents happen because it will cause people to be more aware of their environment,” ASU President Alex Walker-Griffin said. “The messages should also provide tips such as placing items in your trunk before going to class.”

Walker-Griffin believes texts would be the best way to convey these messages because they would give students a reminder to check to see if they left anything in plain sight.

Many see the price of enhanced vigilance as the cost of doing business, on campus, just like anywhere else that becoming a victim of crime is a possibility.

Library department Chairperson Andrew Kuo said he takes precautions everywhere that he goes, be it Richmond, Oakland or Orinda.

“It doesn’t change my routine. I always exercise protection for my car. I use The Club,” Kuo said. “It doesn’t guarantee that my car will not be taken, but the extra time that it takes to remove the club may force a criminal to move on to another car. It’s a deterrent.”

Of the incidents occurring this past two weeks on campus, all have not been auto thefts or break-ins; some have been simple acts of vandalism.

Nursing major April Flanagan parked on Mission Bell Drive while she awaited approval for her parking pass during the second week of classes. She walked off campus to have lunch just after noon on Jan. 31 and arrived back at her car to find her front passenger side window smashed with a large rock that remained on her passenger seat.

“I didn’t leave anything on my seat. There was nothing unusual. I don’t keep anything in the car, especially if I have to park down here,” Flanagan said. “I went to Subway and came back to a broken window. I don’t have money to pay for this.”