Hess mentors students toward a life of service through discipline, bravery, prowess 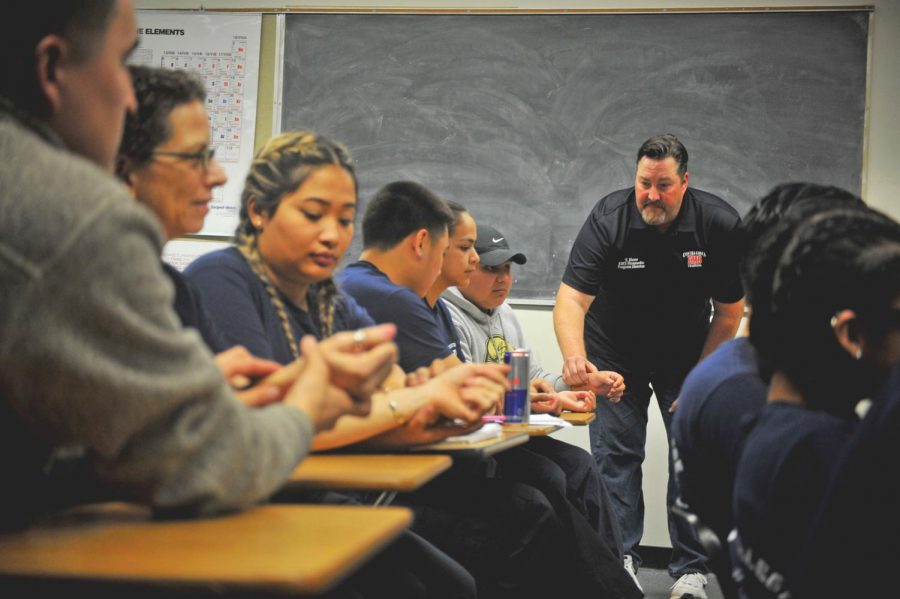 Heroes aren’t always masked crime fighting vigilantes dressed in a cape and tights. Heroes are usually normal people, who in the time of peril, bravely stand up against danger to selflessly help others.

Becoming a reserve firefighter at only 19 years old, Hess spent most of his life boldly putting it on the line for the lives of others. Even after enduring career-ending injuries in the line of duty, Hess’s determination to aid others in their time of need has never decayed.

Hess decided to take on the role as emergency medical technician and paramedic program director at CCC after eight successful years under the same title at Los Medanos College in Pittsburg.

Being in the emergency medical science field for over 20 years and gathering a wide range of job titles, Hess has real life experience seeing the reality of danger as a firefighter, paramedic and EMT throughout the Bay Area.

“I basically have experience in every job I tell these students to go out and get,” he said jokily in his new office on the first floor of CCC’s General Education Building. “I’m here to ensure they have the attitude and the tools they will need to successfully save lives.”

Only outweighed by his zeal for helping others, Hess grew up with a passion for baseball which led him to play first base at UC Davis while pursuing his bachelor’s degree in sociology and anthropology. Hess’s team exceeded expectations by finishing with a season record of 47-12 and shattered the university’s most victories and highest winning percentage records during the 1994 season.

Their performance that season earned them a spot in UC Davis’s Baseball Hall of Fame. Hess and his teammates were inducted in 2004.

After graduation, Hess managed to continue firefighting while on the roster of a minor league White Sox affiliated team.

As he did so many times before, Hess hastily answered the call to duty.

Fighting against flames, Hess pushed through thick smoke clouds to reach a victim trapped inside a house fire. Without hesitation Hess lifted the 340-pound mass of humanity on his shoulders and out to safety. The rescue gravely injured Hess’s back and lower extremities causing him to give up his dreams of baseball and medically retire from the Alameda (city) Fire Department.

Once recovered, Hess fell back on his college education to teach at LMC.

He’s been inculcating future heroes ever since.

He said although the emergency medical field can be a dangerous and physically draining career, it can also be extremely rewarding.

“There’s really nothing better than saving a human life,” Hess said. “I was fortunate enough to have a great team that saved quite a few lives.”

CCC emergency medical sciences (EMS) instructional assistant Carol Dooley said she sees Hess as a hero and her mentor because of his unshaken commitment for helping victims.

“He’s an inspiration to all us who got into the field to make a difference in people’s lives,” she said.

Hess said under his guidance there is a high expectation for students to show determination and a focus on discipline, integrity and morality. All are traits that he feels are vital to have when inspiring to go into the EMS field.

“I’m a disciplinarian but I’m also fair,” Hess said. “I have high expectations but I’m empathetic to what people are going through.”

Hess said rather than just teaching the book, he wants to create an attitude in his students that instills a more effective way of conducting themselves in a stressful, fast-paced yet professional setting commonly associated with EMS jobs.

“My goal is to create an environment where students have to be on time, respectful and work hard because that’s what will be expected from them in the field.”

“He does an excellent job taking the classroom knowledge he gives students and showing how it applies in real life.”

Dooley said Hess has strong story-telling abilities. His renditions of life in the field are so compelling that listeners can close their eyes and vividly visualize the scene he’s describing.

“He’s that good,” she said. “He possesses a treasure trove of field knowledge that our students can greatly benefit from, and prepare themselves for, by simply listening to the stories and advice he shares in the classroom.”

She thinks Hess’s greatest quality is his “heart,” which she said is the most essential tool in EMS fields.

“He truly cares about helping others in their strongest time of need,” Dooley said. “He’s a prime example of who you would want by your side when things are going tough.”