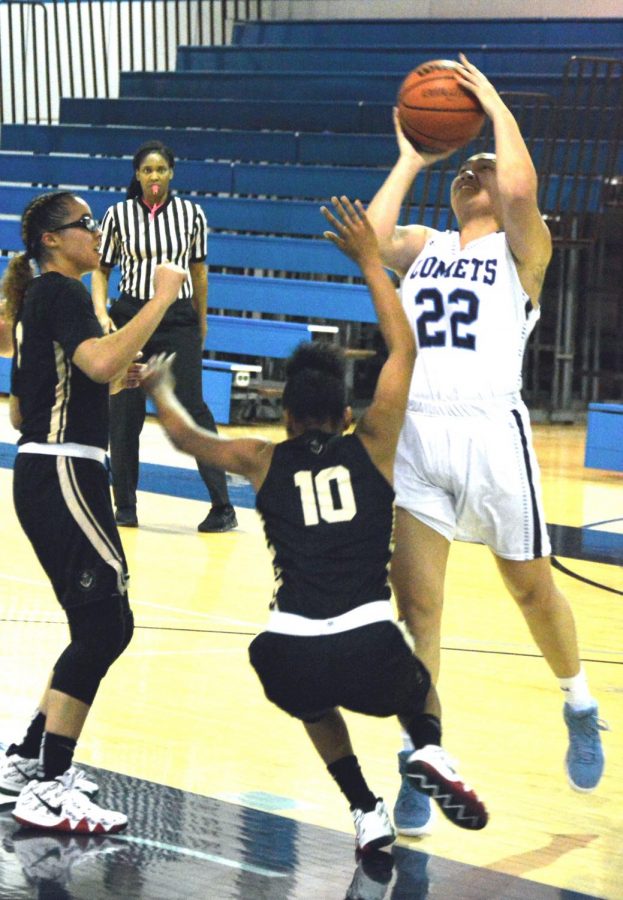 Comet forward Jahnna Maramba shoots as two Mariner guards approach her during Contra Costa College’s 61-51 loss against the College of Marin in the Gymnasium on Friday.

With just two games remaining in the 2018 season, the women’s basketball team failed for the sixth time to notch back-to-back wins, this time, with a 61-51 loss to the College of Marin (15-9 overall and 10-5 in the Bay Valley Conference) Friday in the Gymnasium.

After a convincing 53-46 win against Yuba College on Feb. 2 in Marysville, the Comets hoped to build on that momentum and at the same time avenge the 61-35 drubbing the team suffered Jan. 11 in Kentfield.

“The last time we played them we took a tough loss over there and I didn’t want to feel like that again. So I had a vendetta against them,” Comet forward Jahnna Maramba said. “I wanted to let them know that it wasn’t going to be easy for them to get through us.

“When I came out on the floor, I came out with the mentality that I want to win.”

The game took a different path than expected for CCC. From the opening tip, the Mariners found cracks in the Comet defense and extended an early 4-0 lead to 10-4 before CCC began to fight back.

Maramba (23 points) and Larissa Carvalho (four points) kept the Comets in the game early by controlling the paint.

Carvalho did so with her rebounding and intimidation and Maramba with her aggressiveness and sheer will to get to the basket.

After falling behind early, CCC tied the score at 10-10 with 3:35 remaining in the first quarter.

Despite asserting an inside presence and erasing a six-point deficit, the Comets were not able to maintain their inside advantage due to poor passes and ball handling mishaps.

The Comets trailed at the end of the first quarter 15-10.

Comet guard Kristyle King said, “Things get intense when we pull close to tying or taking the lead in a game. We start forcing things and committing turnovers and everybody’s energy drops. When coach (Shaw) yells we get energized. Nobody likes to get bopped at home.”

After nailing a 3-pointer to begin the second quarter, the Mariners continued to pile on the points. Even when getting multiple shots at the basket on many possessions, CCC was only able to manage enough points to keep the Mariners within reach, but never enough to actually climb back into contention.

The Comets next travel to Napa Valley College tonight to play the Storm at 7:30 p.m.

Against Marin, trailing 21-12 with six minutes to play in the second quarter, CCC finally began to collect enough defensive stops to mount an actual comeback.

With just over one minute to play in the second quarter, the Comets cut the Mariner lead to eight on a Maramba 3-pointer.

Another Mariner bucket just before the buzzer gave the Mariners a 27-17 lead at halftime.

After stringing together, several defensive stops to end the first half, and a Maramba bucket to begin the third quarter, its seemed CCC was continuing the trend it began before halftime.

A 3-pointer by Comet freshman Kianie Williams (eight points) cut the 10-point Mariner halftime lead to five, 27-22 with seven minutes to play in the third quarter.

“I think we get carried away with how close we get to taking the lead in a game then we make the wrong pass at the wrong time,” Comet guard Brooklyn Crawford said.

The Comets continued to battle Marin into the fourth quarter and despite not being able to capture the lead, CCC did not allow the Mariners to run away with the contest, playing the Mariners even points-wise in the second half.

For Marin, it was 15 point per game scorer Kaleah Williams who steadied Marin whenever CCC attempted to surge forward.

In the final quarter, the Comets, trailing by five, Williams knocked down a 3-pointer from two feet behind the arc.

On Marin’s next offensive possession the guard spun through a crowd of Comet defenders, floated the ball over defenders and into the hoop leading her team to a 61-51 Marin road victory.