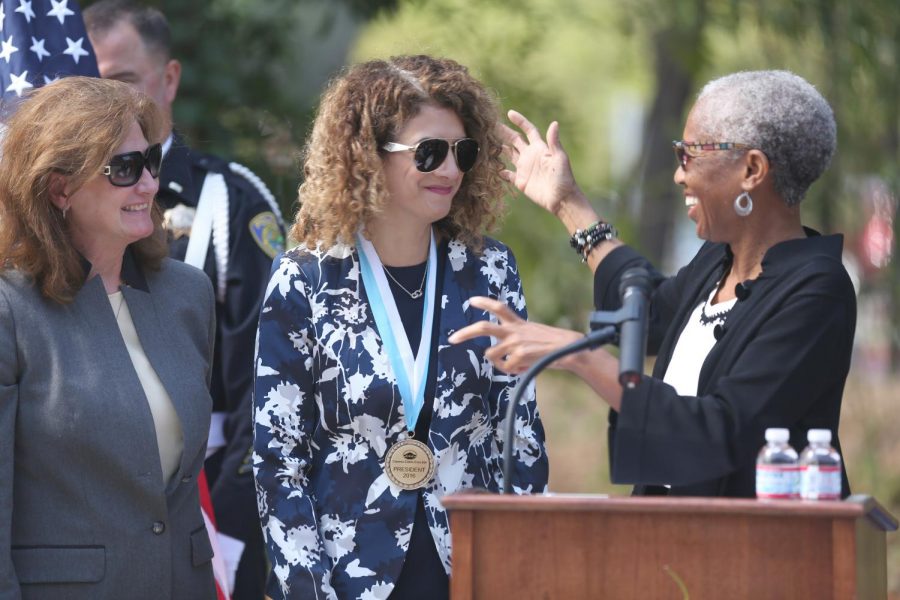 In a move that came as a shock to employees, students and the campus community at large, on Thursday district Chancellor Fred Wood announced the removal of Contra Costa College President Mojdeh Mehdizadeh.

In a press release written by district Public Information Officer Tim Leong, Dr. Wood revealed his plans to return Mehdizadeh to her previous position as executive vice chancellor of education and technology after she steps down as president on March 15.

Mehdizadeh will be replaced by retired Santa Monica College resident Chui L. Tsang who will serve on an interim basis and was hand-picked by Dr. Wood.

Even though the position shift returns Mehdizadeh to her previous role, the roughly $296,000 salary CCC’s current president collects will remain intact.

“When I came to CCC I received a 5 percent increase in pay and as I go back to the District Office my salary will remain the same,” Mehdizadeh said. “That will be on the Governing Board agenda (on Feb. 28).”

In the press release, Wood cites Mehdizadeh’s unique and extraordinary skill set needed to guide all three district colleges as the impetus for initiating the shift in positions.

“While I know how important she has been to Contra Costa College and how much she cares about CCC, both of us know that this decision is in the best interest of the entire district,” Wood said.

When Mehdizadeh left her post at the District Office to serve at CCC, Dr. Sally Montemayor Lenz was brought in from the state Chancellor’s Office to serve as the associate vice chancellor of educational services.

Those duties include providing leadership and administrative oversight for academic, student affairs and support services programs. The vice chancellor of educational services also works to improve international education, and workforce and economic development.

However, without intimate knowledge of the Contra Costa Community College District, Montemayor Lenz soon returned to her Sacramento post.

Mehdizadeh arrived at CCC as interim president on Jan. 16, 2015 and served in that capacity until she was selected as CCC’s 11th permanent president on March 23, 2016. But she has served in many positions for the district.

Former chancellor Helen Benjamin selected Mehdizadeh to serve as president of CCC after applicants sought by a professional recruiter fell short of delivering the optimal candidate. Dr. Benjamin chose Mehdizadeh “because of her many years working as vice chancellor at the district.”

From 1994 through 1997 Mehdizadeh first held a permanent position as Assessment Center technician at Diablo Valley College in the Career Development Center.

She then transferred to the District Office in 1998 where she filled multiple roles, serving as executive vice president for technology systems and educational services, institutional research workforce and economic development.

The decision to return Mehdizadeh to the District Office was executed by Dr. Wood without a Governing Board vote, but with the full support of the board trustees.

District Trustee John Marquez said, “He would have not made the decision if there was any opposition from board members. If there were any, he would have mentioned it. He never said anything to me.

“All the staff works for the chancellor, (and) he works for us. If he messes up, then he has to answer to the board.”

It has been a year since Wood officially took the role as chancellor. His tenure as the eighth permanent district chancellor began in January 2017.

“The chancellor works for the board and Mojdeh (Mehdizadeh) works for him,” Marquez said. “He decided that she has the expertise and knowledge that he needed to have at the District Office. He needed help. I’m one of those board members that doesn’t get into micromanaging, I don’t try to tell him what to do or how to do it. If he asks me suggestions I give them to him.”

Marquez said he did suggest to the chancellor that he come to CCC and speak to the faculty, staff and students to quell their concerns about changes occurring on campus.

Due to scheduling conflicts and the upcoming long weekend, that meeting was never able to take place.

“There never really is a good time. The chancellor has been contemplating the notion of having me return to the District Office for a bit of time,” Mehdizadeh said. “Frankly, the colleges (in the CCCCD) aren’t getting the level of support and services that they need.”

The actual timeline that brought this change varies between board members. Marquez said the process was three months in the making, while others say it has been in the planning stage for one year.

Senior Dean of Instruction Tish Young said, “I heard about it today (Thursday) as well, but I don’t think it’s unusual. Major management changes always happen at the highest level and they are not brought to us until they are fully flushed out.”

She also said the whole state system is in flux.

“We have a new chancellor and he’s challenging us to do things differently,” Young said.

Young traveled to Sacramento to hear Wood speak at a reception where he said the status quo isn’t good enough.

“(The college) isn’t meeting our state goals and if you are going to compete with the status quo then that means change,” Young said.

CCC Vice President Ken Sherwood said he was never involved in any form of discussion and only found out Mehdizadeh was being reassigned when she came to his office to notify him before the College Council meeting on Thursday.

“This was sprung on me like everyone else,” he said. “It’s hard to find leadership like Mehdizadeh’s. She did an outstanding job representing the community.”

Like Young, Sherwood suggested that issues at the district level could be to blame for the quick swap.

“There are complaints coming out of the District Office addressing the lack of leadership,” he said. “People aren’t happy and things are not getting done.”

Wood hand-picked Dr. Tsang who seems to have the support of some CCC employees despite many of them having never heard of him before.

“The decision to install Tsang was made in consultation with me,” Mehdizadeh said. “When I first arrived at CCC as an interim, it was former chancellor Helen Benjamin who asked me to come and serve in an interim capacity.”

Others use the fact that Mehdizadeh has a good working relationship with Dr. Tsang after working with him on the campus accreditation project.

Young said, “She (Mehdizadeh) says we are being left in very good hands. It’s an excellent community college district that he’s coming from so I think we can benefit from that knowledge,” Young said. “I haven’t had a chance to do one lick of research about him.”

With the continuing trend of leadership positions drifting away from people who have ties to CCC, Tsang is an exception.

“I got my higher education start at CCC, so I am a Comet,” Tsang was quoted as saying in Leong’s email. “Thanks to that experience, it gave me the foundation for my career. I understand the challenges and circumstances of our students because I was just like them.”

An immigrant, Tsang came to the United States from Hong Kong as a 19-year-old and now has a Ph.D. in linguistics from Stanford. He was enrolled in classes at CCC from 1971-73.

Although successful, Tsang’s tenure at SMC was seen, at times, to be controversial. During a 2012 student protest over a proposed system to increase core-class fees, 30 students were pepper-sprayed after attempting to forcefully enter a Governing Board meeting.

“I don’t know any of the details of the incident,” Mehdizadeh said.

Although Wood consulted Mehdizadeh when selecting Tsang, she said the 2012 incident at SMC was not taken into consideration when the decision was made to name Tsang as interim.

According to a Santa Monica College review panel report, one officer was found to have behaved in an unprofessional manor.

The report states that no penalties were given to anyone involved in the event and instead the panel suggested that Santa Monica College should ultimately “move forward strengthened by a re-doubled commitment to the values of mutual respect and collegial communication.”