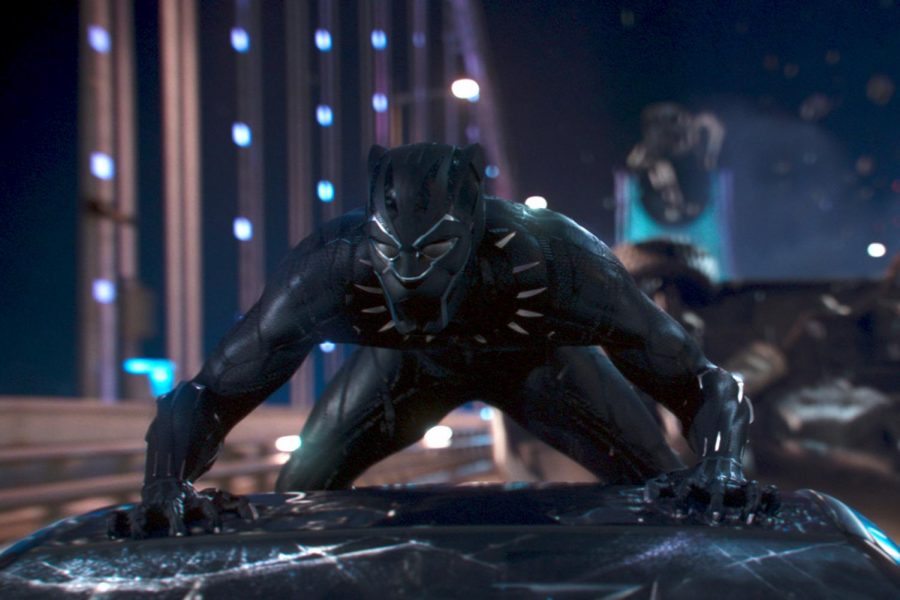 Since 1993, Marvel Studios has enjoyed a successful run bringing its comic book superheroes to life on the big screen in ways that have always been thrilling, gripping and, of course, action-packed, for movie-goers

Marvel’s newest installment to its cinematic universe “Black Panther,” directed by Oakland native Ryan Coogler, embodies all of what we came to expect from Marvel and much more.

Not only does “Black Panther” boast as Marvel’s first release from a black director, it puts an end to the studio’s 14-year long drought from producing a standalone black superhero movie since 2004’s “Blade: Trinity.”

More importantly, in its fictional capacity, “Black Panther” shines a glaring spotlight on the often ignored and unanswered frustrations faced by America’s black community – how did we get here and where do we go from here?

Earning over $700 million globally, “Black Panther” exceeded expectations and received a number of accolades including highest grossing Thursday night preview and highest grossing movie ever directed by an African-American filmmaker.

Unprecedented to the studio, “Black Panther” features a cast predominantly comprised of some of Hollywood’s most established and newest examples of black excellence. Together they create a captivating portrayal of the fictional African country Wakanda and its incredibly advanced, yet conspicuously hidden, afro-futuristic society.

The land is also portrayed to be one of the only countries that can claim to never have been inhabited by European colonists.

After an animated introduction to the kingdom of Wakanda, Coogler opens the film with a flashback to 1992 that takes the audience to an apartment complex in Oakland. This flashback provides context to the plot and shows the relationship of the storyline to Oakland’s Black Panther Party.

Then, the story of the Black Panther begins.

Following the assassination of his father and king T’Chaka during a U.N. speech, a scene featured in Marvel’s “Captain America: Civil War,” T’Challa (Chadwick Boseman) embraces the onerous responsibility from inheriting the crown and becoming Wakanda’s new Black Panther, protector of the nation’s population.

T’Challa is faced with the dilemma of deciding where to steer his country. He is torn between introducing the world to Wakanda’s secrets and potentially subjecting the country to war with envious leaders or continuing the nation’s tradition of peace through global isolation.

Cloaked by a vibranium force field, Wakanda hides its beautiful futuristic civilization behind an illusory rain forest. Wakanda is seen by foreign countries as a desolate third world oasis of sheep herders and rhino tamers.

To maintain the façade and ensure peace for its people, Wakanda refuses any foreign support and ignores the turmoil of the outside world. This is done as a precautionary measure to keep its trove of vibranium a secret and prevent war. Vibranium is the strongest metal in the Marvel universe and the key to Wakanda’s advanced technology.

Full of majestic wonder, Wakanda’s rich African culture and ancient rituals paired with next-generation technological innovations spark the imagination of many to wonder what could have been of the countries in Africa without the influence of European colonialization.

While fulfilling his primary mission of protecting the Wakandan people, the Black Panther arms himself with superhuman abilities granted from drinking the nectar of a rare heart-shaped flower and a vibranium infused suit. He wields a collection of gadgets designed by the country’s head scientist Shuri (Letitia Wright) whose sarcastic outbursts and lighthearted personality bring comedic relief to many of the film’s intense scenes.

King T’Challa’s character is humanized throughout the movie through his close-knit relationship with his mother Queen Ramonda (Angela Bassett) and disputes with his little sister Shuri.

Going against the cookie-cutter world-ending plot we typically see Marvel villains cling to, Killmonger’s motives are relatable and emotionally resonant.

Killmonger possesses a noble conception that calls into attention Wakanda’s isolationist ideals and neglect for the diasporic African population that endured the harsh realities of European colonization and slavery.

The technologically advanced country hoarded futuristic weapons which could have prevented many atrocities from ever taking place.

Killmonger is fueled by an amplitude of black rage emanating from the continuous systemic racial oppression of people of African descent and the death of his father, a Wakandan prince and T’Challa’s uncle.

Killmonger devises a plan to sneak into Wakanda, defeat T’Challa in combat and become the country’s new king. He wants to use Wakandan weaponry to enact a global rebellion freeing the world’s oppressed people in the process.

His vision of peace brought forth by death and destruction.

Before challenging King T’Challa and earning Wakanda’s highest title, Killmonger lays out exactly what his intentions are as king.

“I want the throne. There’s about two billion people around the world who look like us and their lives are a lot harder,” Killmonger declares to T’Challa and his group of advisers. “Wakanda has the tools to liberate them all.”

T’Challa disagrees and announces that his responsibility only encompasses his people — the Wakandan people.

“Didn’t life start here on this continent?” Killmonger replies. “So ain’t all people your people?”

Coogler gives Killmonger humanity that is not often seen in a villain. Although he’s driven by rage and his appetite for revenge, Killmonger’s motive is principled as it draws a line between the fiction of Wakanda and the actual realities of the black diaspora.

Through its characters, “Black Panther” presents two extremely different points of view regarding combat against racial oppression around the globe.

T’Challa’s inclination is to protect his country by any means — including turning a blind eye to the detrimental effects of the Trans-Atlantic slave trade and the European colonization of the African continent.

On the other hand, Killmonger burns with the unwavering desire is to use Wakanda’s futuristic weaponry and military might to seek retribution for hundreds of years of racial injustice on the global stage and bring forth a new reality where oppression doesn’t exist.

In any event, the film doesn’t pretend to offer any easy solutions and leaves the audience struggling with the question — what would be the right thing to do?

As king, Killmonger’s first order of business is as brazen as it is swift — to destroy all the remaining heart shape flowers. The action deems it impossible for another Black Panther to rise. He orders shipments of Wakandan weapons to be dispersed to all tyrannized regions of the world commencing a global revolt.

However, before the weapons can leave Wakandan airspace, T’Challa defeats Killmonger with the help of his allies and close family, reclaiming his title as nation’s leader.

Nevertheless, Killmonger’s criminal charisma leaves a lasting impression — even in his last breath which solidified his philosophy and his commitment to the cause.

“Bury me in the ocean with my ancestors that jumped from the ships,” Killmonger pleads in a stern but fading voice, “because they knew death was better than bondage.”