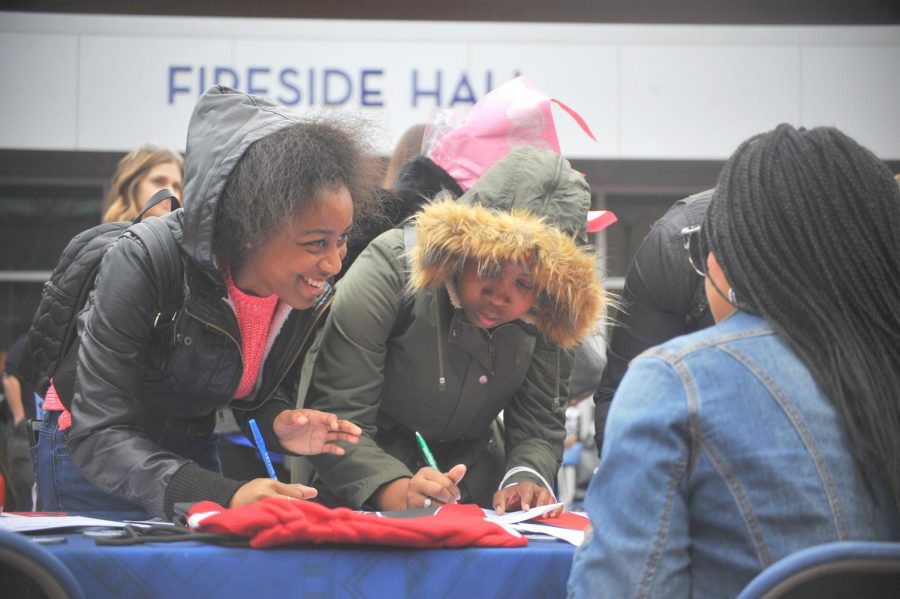 There was big love for the Historically Black Colleges and Universities Caravan that pumped beats into Campus Center Plaza and showcased the unique culture of these schools, especially since it coincided with Associated Student Union’s Valentine’s Day event on Feb. 14.

Twenty representatives from HBCU attended this event and students had the chance to meet with college representatives and fill out applications and possibly get accepted on the spot and receive scholarships.

Biology major Janet Bakhtary applied to Jackson State University in Mississippi and she was accepted right after submitting her application.

“I chose to apply at this college because it is a feeder school for people who are interested in pre-med to go into the medical field.” She said it was a good event for students to receive resources and opportunities to apply colleges and universities.

ASU Senator Cody Poehnelt said, “We have a photo booth for people who want to take Valentine’s photos with their friends, boyfriends, girlfriends, spouses or just by themselves.”

“Here in California we have a very multicultural community but it’s just different when you are at an institution where you are not the minority,” said Carrie Lee Walker, an African-American studies major who has applied to both Howard and Norfolk State.

“You really get a chance to see the diversity of black culture at these schools. Representation is also important. It is inspiring to be at a school where the majority of the professors look like you.”

Poehnelt said the reason the ASU is hosted the Valentine’s Day event was because it is a nice way to get students involved with the campus and each other. Not everything has to be a serious event

The West Contra Costa School District, the Career/Transfer Center here at CCC, staff, student workers and the Student Life program all helped with the production of the event, CCC counselor Andrea Phillips said.

According to www.contracosta.edu, California community college students who complete certain academic requirements are guaranteed transfer to more than 35 participating HBCUs.

HBCUs were established primarily to serve the higher education needs of the African-American community, however they are open to students of all ethnicities.

Kinesiology major Amir Davis said, “I am involved with track and running so am I looking for schools that compete in track. There has been some positive feedback from the schools I have talked to.

“They have given me some useful information about getting accepted into these colleges and the process of the applications,” Davis said.

CCC history professor Manu Ampim said he attended Morgan State, which is a Historically Black University located in Baltimore. He said that attending a HBCU offered him opportunities to grow in a supportive environment that was not available to him at the California community colleges that he attended.

“It was the right environment for me at the right time,” he said of Morgan State. “It provided me with the foundation to do much of the work I am doing now.”

Ampim received his first degree in business management, but his experiences at Morgan State inspired him to get his master’s degree in African-American studies.

“At Morgan State I learned to research from a historian who taught from an Afro-centric point of view.”