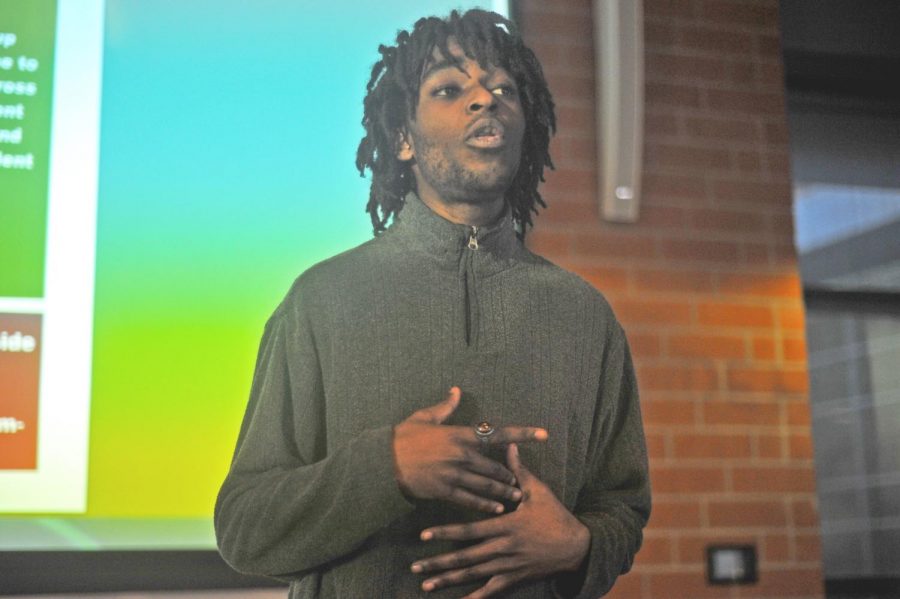 In a night filled with confidence, vulnerability and the power of the spoken word, students at Contra Costa College had a chance to express themselves through poetry for their peers and professionals to hear.

Local poetry troupe, Bay Area Creative, hosted Poetry Night in Fireside Hall on Thursday. The event featured food and a chance for students to sign up and share their written work.

After a few brave students signed up, the poets began to express themselves through colorful prose as the evening went on.

Host Reginald Edmonds runs a nonprofit poetry slam in Oakland. He created his nonprofit while attending Richmond High after he met with a music producer who helped him put it together. Edmonds performed the first poem of the night, a piece on where he grew up and how it shaped him into who he is today.

His second poem evoked Black History Month as he reflected on the empowerment of his race and “what Black means to me”.

He described his attraction to a woman he met in the style of rhythmic hip hop.

It wasn’t until he read the works of Langston Hughes and Maya Angelou that he understood the powerful connection poetry has to the African-American culture.

Creative writing major Mijzel Dotson shared a poem of his own.

“I was invited to come here,” he said. “I liked being able to share my poetry and meeting the poets. The audience was supportive and I liked that the poems were centered around blackness.”

Dotson will be hosting the next Poetry Night on March 28.

Student Life Coordinator Joel Nickelson-Shanks was happy with the turnout.

“This gave students a voice and an opportunity to speak out.”

Edmonds is also involved in poetry competitions held in Berkeley where poets earn points for performing. The “slam season” begins in August and runs through April. Poets must compete in six competitions to qualify for the National Poetry Slam.