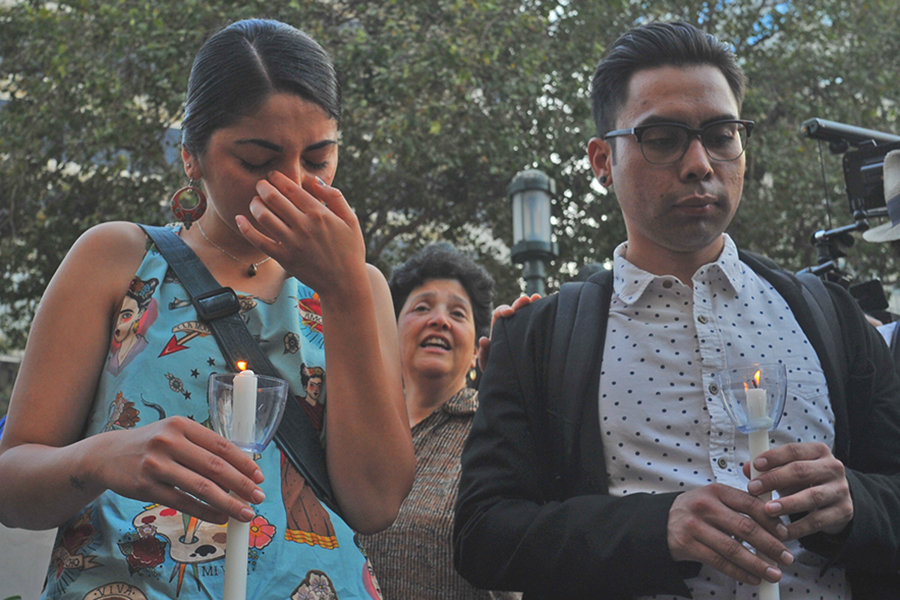 Fremont resident Mayra Alcaraz (left) wipes tears from her eyes while surrounded by friends and community members during a vigil at Frank Ogawa Plaza in Oakland, California on Thursday, Aug. 31, 2017, hours after news leaked that President Trump will repeal the Deferred Action for Childhood Arrival order. DACA recipients were asked to form a circle while the rest of the group surrounded them to sing "We Shall Overcome."

President Trump was unable to sunset the Deferred Action for Childhood Arrival (DACA) program due to the rejection of his administration’s fast-tracked appeal by the U.S. Supreme Court at the end of February.

Trump had set March 5 as the date that those protected under DACA would no longer be able to renew applications, but a California District Court ruled that Trump’s reason for ending the Obama era executive order was flawed.

This decision called for the DACA program to remain in place. DACA recipients can continue to obtain renewals. However, new DACA applications are not being accepted.

The Trump administration took the unusual step of appealing this decision directly to the U.S. Supreme Court.

They were trying to do an end run around the 9th U.S Circuit Court of Appeals because it is a more liberal court while the Supreme Court is majority conservative with the recent confirmation of Neil Gorsuch under Trump, Contra Costa College political science department Chairperson Vanna Gonzales said.

The Supreme Court did not agree to take the case, they said that it must go through the normal channels, this means that it will go back to the 9th circuit appellate court.

It is likely that the Trump administration will appeal again to the U.S. Supreme Court if they do not receive a favorable decision from the 9th Circuit Court, “because (otherwise) he would look weak and he is a man with a big ego,” CCC La Raza department Chairperson Agustin Palacios said.

The 9th Circuit Court could hear the case as early as May but by some estimate it could be well into next year before a decision is rendered.

March 5 was an arbitrary date that Trump set as a timeline for congress to pass a reform bill, Gonzalez said. But Congress’ schedule is not set by the president. That was just a way for him to say he is waiting for congress to address the issue because his whole argument for ending DACA is that President Obama used an unconstitutional form of executive overreach to set up DACA in the first place.

According to the U.S. District Court orders by Judge William Alsup, the court ruled that Obama’s executive order was within the law.

The injunction from the California District Court as well as a similar ruling in New York District Court and the refusal by the U.S. Supreme Court to hear the case out of the normal order is seen as a victory but also only as a delay. Even if the more liberal 9th U.S. Circuit Court of Appeals offers a favorable decision for DACA recipients, Trump can appeal once again to the U.S. Supreme Court after the lower courts have heard the case in the proper order.

However, a delay may be what is most needed for the future of the DACA program. Congress has been unable to come to an agreement on immigration reform in part because Republicans who control both the house and the senate are pushing for billions of dollars in funding for a border wall and limitations on family reunification programs that allow immigrants who have obtained citizenship to sponsor family members for citizenship. These programs are also known as chain migration. Many Republicans want these provisions to be attached to a permanent resolution for DACA.

What many people in the immigration movement are asking for is a Clean Dream Act that includes a path to citizenship with no ties to funding for a border wall or other legislation designed to criminalize immigrants, CCC counselor Norma Valdez-Jimenez said.

You also hear a lot of Dreamers saying that this is not just about themselves because their parents and family are also facing immigration problems. The current narrative about protecting DACA students is one that criminalizes their parents. That is really a jarring statement for dreamers to accept as a means of gaining legal status, Valdez-Jimenez said.

An extension of DACA may be included in a package of funding bills that Congress needs to pass by March 23 to prevent another government shutdown. But Republicans are sure to attach their immigration reform measures to any DACA extension. If the injunction from the two district courts holds until the end of the year and democrats are able to win more seats in the House and Senate there might be more hope for legislation that resembles a Clean Dream Act. But with Republicans in control of Congress this kind of legislation is unlikely.

“Although this administration has claimed DACA recipients will not be targets for enforcement, we have already seen these young men and women used as political pawns in negotiations, so it is not a stretch to imagine that they could be used for other political purposes including enforcement,” he said.

“If DACA does end, in theory applicants would lose the right to be legally employed. If that does happen it will be interesting to see what the community response is both here in California and throughout the country.

“The best way to protect and prepare is to know your rights, obtain a legal consultation so that you understand your options and promote power not panic in these difficult times,” Yazdin Panah said.

“No matter what happens with DACA, California has protections in place like AB 540,” Valdez- Jimenez said. “Students will still be able to apply for the California Dream Act and the state legislature recently expanded who qualifies.”

Contra Costa County has launched a rapid-response deportation-defense 24-hour hotline at 925-900-5151. According to a press release from the Contra Costa Board of Supervisors this program, run by Office of the Public Defender, is known as Stand Together Contra Costa. It offers information, verification and rapid response to deportation activities. More information is available at StandTogether ContraCosta.org.