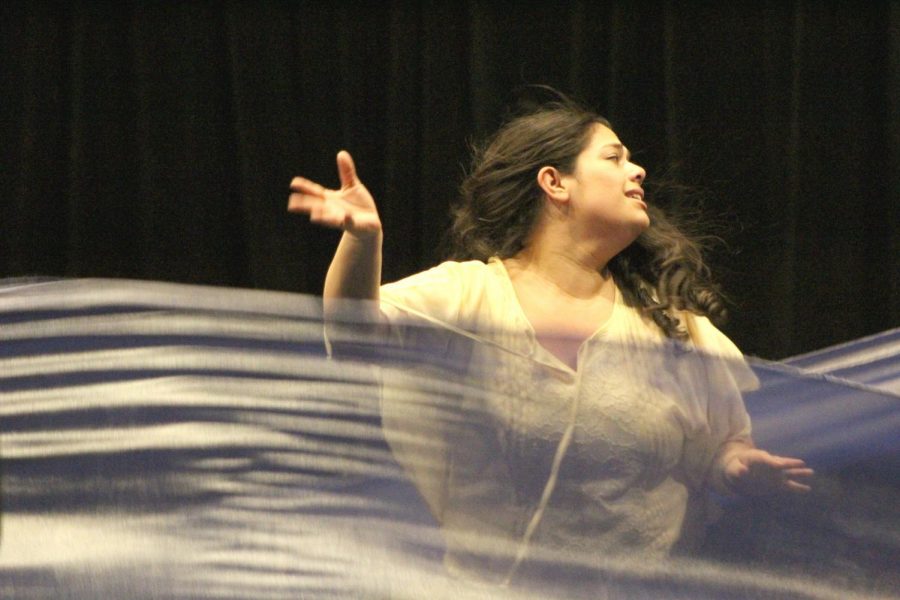 Xochiti, played by Stephanie Rivas, acts as she were being drowned with ribbons that signify water during a Monday rehearsal for "The Cries of La Llorona" in the Knox Center.

Folklore lives on in cultures by each passing generation relaying these stories to their children. With any longstanding story, individuals put twists on these childhood tales applying their own values mixed with influence from other people’s interpretations.

“The Cries of La Llorona” is directed and written by drama department Chairperson Carlos-Manuel Chavarria and opens on April 6 at 7:30 p.m. with additional dates on April 7, 13-14 at 7:30 p.m. and April 8 and 15 at 3 p.m. at the John and Jean Knox Center for the Performing Arts.

Tickets are $15 general admission and $10 for students.

La Llorona, also known as “The Weeping Woman,” is a story about a woman who drowns her children and as punishment is forced to wander the Earth searching and weeping for her dead children.

It’s also said she will abduct children that look like her deceased kids.

The story would be used as a bedtime story, Chavarria said, to scare kids from wandering off.

The twist Chavarria brings to the script shows the “why” and “how” La Llorona becomes the feared ghost she’s known as, while humanizing her origins into something less sinister.

Chavarria fuses his own interpretation of a modern day haunting with the version of the folktale told to him by his grandmother, continuing the lineage of the story told through his family to the stage.

The play takes on several angles to the traditional La Llorona tale, taking place in modern day and the past exploring the tale’s origins.

Stephanie Rivas plays Xochitl, who becomes the feared ghastly figure after her death.

Rivas said the play has a feminist slant depicting women from different time periods and walks of life trying to do their best in the world.

Chavarria said he makes an effort, as a feminist, to have female leads in his plays and to show their struggles and triumphs in a oppressive culture. He said this depiction of the folktale does, indeed, take a feminist slant.

“She has to suffer for the drowning of her children and is punished. I always questioned if a man drowned her children would the punishment be the same, because it’s men writing the stories,” Chavarria said.

The immigrant angle comes from the modern day story where Blanca, played by Katherine Garcia, is haunted by nightmares of La Llorona and is wrecked by the anxiety of being an undocumented immigrant in the United States, unable to see her children in Mexico.

“Growing up in a Mexican family, you have this idea of relationships, or how you’re gonna get married and have a kid and that fairy tale didn’t end up for her,” Garcia said.

The modern day ghost that haunts Blanca is played by Silvia Sobal.

She said she found out about the play when her son Oz Herrera-Sobal, who is the stage manager for the production, encouraged her to audition.

The origins of La Llorona are told opposite of the modern day segments with Xochitl fighting for her love with the Spaniard Jose-Carlos, played by Edgar-Arturo Camacho, when his racist father violently disapproves of his son’s relationship with her, an indigenous woman.

This production will be the first time the play’s script graces the stage.

The production is also being entered for the Kennedy Center American College Theater Festival with officials coming to look at the acting, directing and playwriting.

Chavarria said, “The Cries of La Llorona” finalizes his vision of representing different groups with each production during the season.

“‘Emotional Creature’ was about female empowerment and ‘How We Got On’ was about students of color. I also wanted to do a Latino play with Latino actors,” Chavarria said of the drama department’s shows this year.