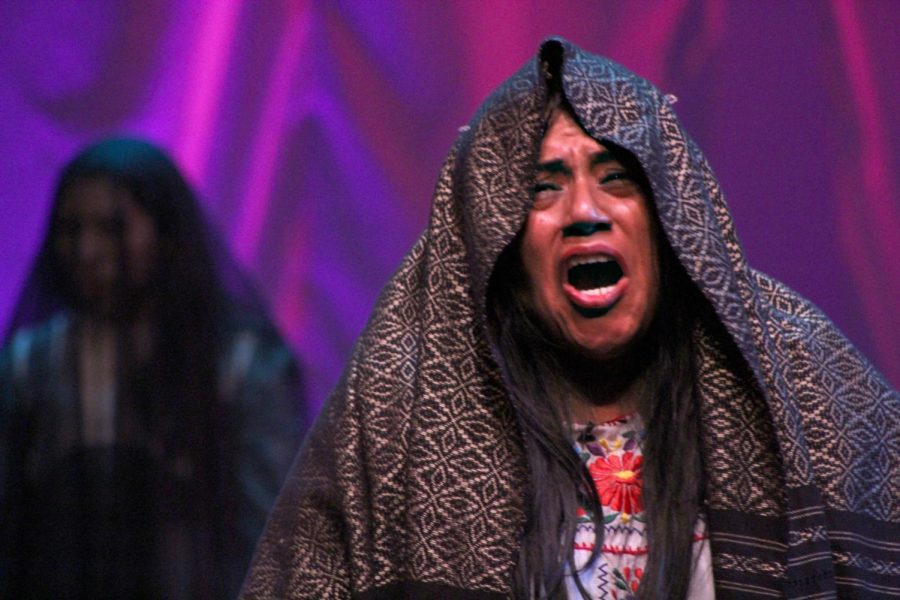 La Llorona, played by Silvia Sobal, weeps as she wanders eternally looking for her drowned children in “The Cries of La Llorona,” currently running in the Knox Center. The play continues Friday, Saturday and Sunday.

Bringing the centuries old Mexican folktale to the stage, “The Cries of La Llorona” captivates with a dazzling set design, vibrant lighting and an enchantingly modernized feminist slant.

The play beautifully mixes the legend of the weeping woman with a pertinent storyline of an immigrant family struggling for survival in the United States following the election of President Donald Trump.

“The Cries of La Llorona” will continue its run Friday and Saturday at 7:30 p.m. and Sunday at 3 p.m. in the John and Jean Knox Performing Arts Center.

In the folklore, La Llorona cries because her children died in a drowning accident. Consequently, her crying ghost, said to lure naughty children to a watery death, is a perfect tool to keep misbehaving youngsters in line.

Shifting eras from the 17th century to present day United States, with period costumes to differentiate the time, the actors do a convincing job pulling the audience into an old-world atmosphere without the help of a change in scenery.

Stephanie Rivas, who plays the indigenous woman Xochilt, shines as she serves passion and intensity through her struggles with falling in love and having children with Spaniard Jose Carlos, played by Edgar-Arturo Camacho-Gonzalez.

This, of course, is against the orders of Jose Carlos’ father, played by Ayden Santos.

When confronted by the deceit of his son, the emotion of the moment falls flat. The moment is missed and the scene lacks dramatic effect due to the lackluster acting of Camacho-Gonzalez and Santos.

The aftermath, however, turns into Chavarria’s feminist interpretation of the cultural folklore, which becomes the highlight of the show.

All too common, women throughout many cultures are used as the scapegoat and deemed lesser than men.

Chavarria, however, spotlights a woman’s struggle. This feminist perspective is the anchor of the production as the tale of La Llorona interchanges between the 17th and 21st centuries.

Although obstacles of being undocumented are presented, the issue is handled with light humor throughout the course of the play due to the comic relief of the character Angie, played by Dania Chavez.

Her performance brings a much-needed breath of fresh air as she steals scenes with her over-the-top portrayal of Blanca’s and Mikey’s cousin.

Moments of tension do litter the show as Blanca, played brilliantly by Katherine Garcia, is haunted by Silvia Sobal’s portrayal of La Llorona.

In moments of intensity, Sobal does a perfect job of capturing the eeriness of the weeping woman and takes the entertainment value to a unexpected level. She carries the show when it dips into low points.

Garcia, along with Heriberto Barba, who plays Blanca’s brother Mikey, are the standouts of the entire show. Their acting and the chemistry they share as siblings is not only believable, it is top notch.

Although some of the jokes, which deserved a laugh, were not received by the audience, Barba and Garcia do a fantastic job of continuing the scene without a hitch.

Barba’s compassion and lovable personality is golden as he aids his sister in her struggles with her missing child and the curse of La Llorona.

The writing of the show is impeccable as scenes glide smoothly from one to another. With a fresh dialogue that intertwines Spanish and English, this modern take on a legendary tale doesn’t disappoint.

Even with a couple low points of spotty acting, “The Cries of La Llorona” is a winner for the whole family because of its message.

While incorporating relatable characters that would be seen throughout the community, the play sheds light on the stigma women face in a world that is traditionally determined by men.