Cardi B shuts down critics with lyrical prowess 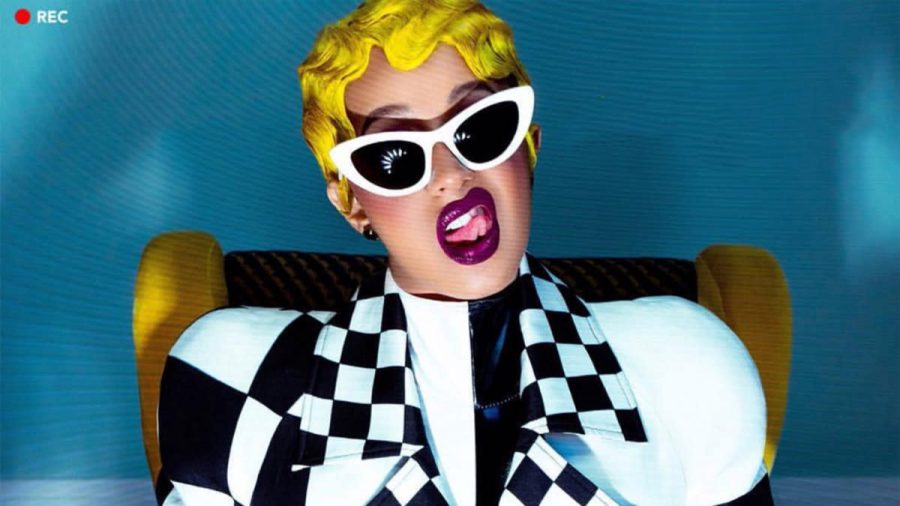 New York City’s Cardi B released her debut album “Invasion of Privacy” on April 6 and it has already reached No. 1 on the Billboard Top 200 albums chart.

Hip hop’s newest female act Cardi B bares all for the world to hear while effortlessly turning skeptics into believers with her debut album “Invasion of Privacy.”

Once one of those skeptics, I tried to drown out the praises of Cardi-crazed fans and ignore her insanely successful single “Bodak Yellow,” in hopes of not falling victim to the earworm.

After listening to her debut album and discovering that alongside her beauty does come “bars,” I now too believe she’s stomping out the competition in her Christian Louboutin “bloody shoes.”

Released on April 6, “Invasion of Privacy” is both bold and vulnerable, flawlessly reflecting both complex sides of the female gangster rapper.

Cardi sets the album’s tone on the piano-led intro “Get Up 10,” where she lyrically paints her life’s picture of “nothing to everything.”

She raps about growing up poor in the Bronx and using stripping as a way to make a living for herself.

She opens the album with the line, “They gave a b**** two options: strippin’ or lose, used to dance in a club right across from my school.”

On one long winded verse, “Bardi” details the obstacles she overcame to get where she’s at now and promises there’s no turning back for her.

She raps, “I went from rags to riches, went from WIC to lit, only person in my fam to see six figures.”

Cardi maintains that same altitude throughout the album, apart from “Ring” and “Thru Your Phone,” the album’s lighter and more personal tracks.

Bay Area inspiring R&B artist Kehlani helps on the sing-song ballad “Ring,” where the pair illustrates the feelings of a dying fling on a relaxed, but poignant, beat.

The slowest track on the album, “Thru Your Phone,” is undoubtedly the project’s most passionate.

Heartbroken by a cheating boyfriend, she uses the emotionally-rich piece of work to detail how she exacts revenge in her own way.

Cardi displays her lyrical prowess on the album’s flex anthems, like “Money Bag” and her impressive remake of a 2001 Project Pat classic dubbed “Bickenhead.”

Over a sampled beat, she cleverly re imagines the head-banging dirty south classic “Chickenhead” from a female perspective on a guaranteed “summer block party” anthem.

The boogaloo-infused Latin trap song “I Like It” plays as an energetic crossover track with an infectious trap beat carried by an irresistible Latin groove underpinned by a dynamic sample of the Pete Rodriguez’s 1967 track, “I Like It Like That.”

The highlight of the album’s 13 songs turns out to be the Chance the Rapper-assisted track “Best Life.”

The motivational feel-good track touches on Cardi’s troubled childhood and how blessed she feels now positioned in a better situation.

What I found most impressive was Cardi’s dynamic flow and clever wordplay over the entire album.

Elusive and slick, Cardi uses the moody body of work to solidify the fact that her lyrical capability is extensive and versatile.

She flexes the broad range of her lyrical flow on the album’s club bangers while staying more direct and on-topic on its more subject-based ballads.

But, I believe the pain and relatability behind her lyrics is what drives most fans to Cardi’s catalog, as well as her themes of female empowerment through pioneerism.

Cardi keeps the album features to a minimum, showing she can make smash hit records on her own without the help of a popular artist.

This is similar to the solo success of her single, “Bodak Yellow,” which reached No. 1 on the Billboard Hot 100 chart, making her the second ever female solo artist to reach its peak, following Lauryn Hill in 1998.

Blasting out the gate in a fireball of success, “Invasion of Privacy” has already sold 255,000 equivalent album units in its first week, earning its rightful place in the No. 1 spot on the Billboard 200 albums chart.

Cardi’s “Invasion of Privacy” is an ebullient and polished piece of work that introduces new fans to Cardi’s hypnotic flow and timeless themes, while giving old fans what they’ve been craving since the release of last year’s mixtape, “Gangsta B**** Music, Vol. 2.”