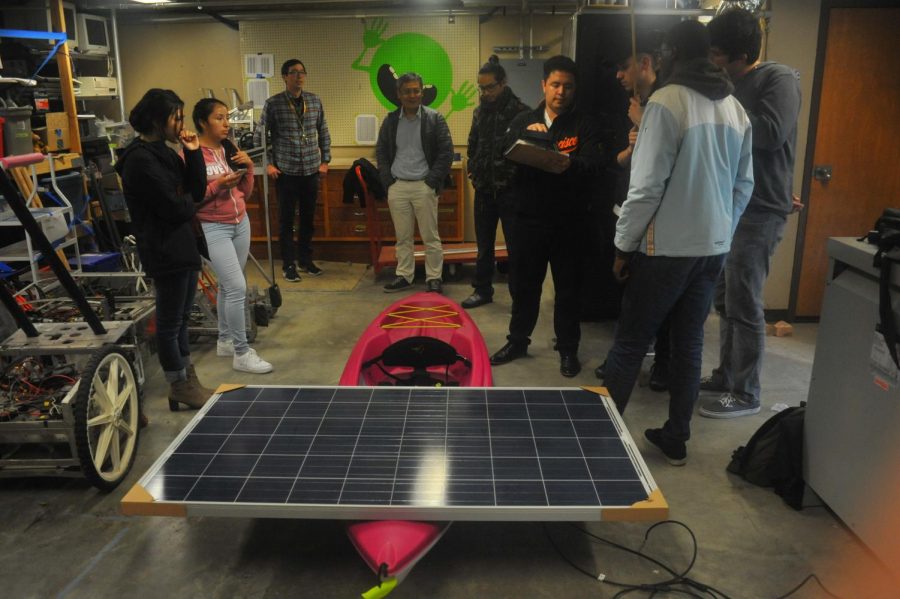 A group of students enrolled in Astronomy 298, Independent Study, inspect a kayak with a mounted solar panel during a meeting in the Art Building on April 6. The kayak will be raced in the Solar Regatta boat competition at Rancho Seco Recreational Lake on May 5.

Students from Contra Costa College’s Astronomy 298 Independent Study class are gearing up to electrify the crowd with their freshly designed solar-powered kayak at the 7th annual California Solar Regatta on May 4 and 5, hosted by the Sacramento Municipal Utility District.

Working together in teams, participating students will design, build and then race their own solar powered boats at Rancho Seco Recreational Lake, 25 minutes outside of Sacramento.

Teams will be judged on speed, endurance and maneuverability during the event’s three races, according to the event’s information page on SMUD.org.

SMUD’s yearly hands-on educational competition is open to all high schools and college institutions in California which has allowed participants to gain valuable out-of-the classroom experience with renewable energy and engineering.

Headed by SMUD’s Energy Education and Technology Center, the CSR will span the first weekend of May with the high school level competition to be held on Saturday.

That Sunday will mark CCC’s first time ever competing in the annual event. CCC’s team, The Milky Ways will compete against other colleges for cup points tallied over a series of competitions judged in a range of areas including boat design, sustainability, technology and three races.

Teams entering the competition must consist of a minimum of four students with a team leader or mentor, not exceeding 30 members.

There must also be a minimum of two certified pilots on each team to operate the boat during the event’s three boating contests; the slalom, sprint and endurance races.

The Milky Ways consist of around 15 active participants. The team is divided into three sub-groups, each focused on a different aspect of the designing process: construction, electrical power and safety and marketing, physics major and crew member Gael Flores said.

Faculty adviser and physics professor Mark Wong said the project has cost about $500 so far. The bulk of the costs have been covered by grant funds specifically earmarked for student learning projects.

The solar panels were provided by the race organizers for free and boat safety equipment is being borrowed from members and advisors that have kayaks, he said.

According to event rules, boats may not be longer than 20 feet or wider than 8 feet and must be piloted by a certified operator who has passed a boating safety course prior to the race.

Participating teams may either custom build a boat from scratch or modify an existing boat to create a solar powered craft.

Flores said the modules will gather solar energy that will be stored by the boat’s battery bank which will supply the engine’s power.

Although the group only got the kayak a few weeks ago, the planning process for the boat started last November. Though operating smoother now, figuring out how to approach the challenge, work within the given budget and organizing schedules for meetings were some of the team’s earlier challenges, Wong said.

However, the boat passed its first powered run in the water over the weekend.

“Testing went pretty well, but we found some minor things we are going to need to fix,” Flores said. “But other than that, I would say we’re right on schedule.”

Teams must request a design review from judges to receive cup points for their boat’s design and sustainability features. During the review, students will answer questions about their boat and explain the use of solar, wiring, design, materials and mechanical operation of their boat to judges.

Astronomy professor and chair of the astronomy, physics, engineering and geology department Jon Celesia said getting good grades in class are pivotal for any student.

However, he said, hands-on experience can be more beneficial for students planning to join the engineering field.