Nowhere to park, why not here? 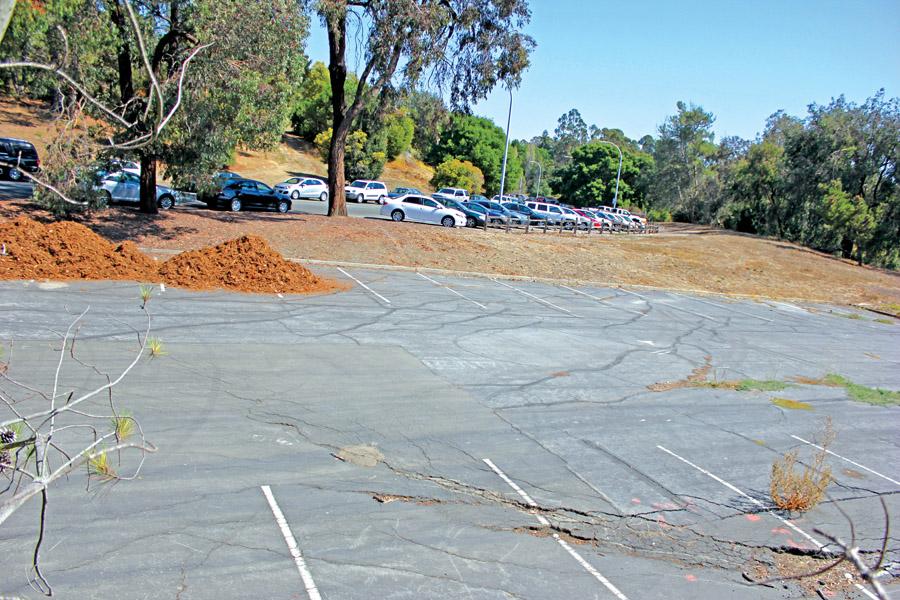 The student-dedicated parking Lot 16 has space to accomodate 41 vehicles, but has gone unused by the college for two years due to a sinkhole in the middle of the lot. Pending the approval of the district Governing Board, Lot 16 may be repaired and re-opened as early as spring 2015.

Re-opening parking Lot 16 would return 41 parking spaces to students, but is not likely to happen until next semester at the earliest.

Buildings and Grounds Manager Bruce King said Lot 16 was closed roughly two years ago after a sinkhole formed in its center. Due to the uneven and cracked surface of the parking lot, it was closed to prevent possible injury to students or property damage.

To prevent the hill from further landslides, the district is planning to stabilize the hill with a unique system known as the Geopier SRT system, King said. This project will include a pre-emptive stabilization of Lot 17 as well, and includes the resurfacing of both parking lots, he said.

“They pound these things into the hillside and they stabilize the entire hill,” King said. “The plan is to stabilize the hill before the next rainy season.”

These “things” are known as Plate Pile elements, which are non-displacement steel sections that can be driven into almost all soil types to stabilize downslope forces and provide resistance, thus preventing an otherwise eroding hillside from sliding downward.

Pyle said that contracts have yet to be finalized or approved by the district Governing Board, so tentative dates for a beginning and end to the hillside stabilization project are not available, nor are any cost estimates.

“Our Governing Board has to approve large contracts before they can start,” Pyle said. “This requires a lot of staff work to put the contracts together. In October the board will consider the contract for hillside stabilization. The contracts for the resurfacing are still being developed.”

Though Lot 16’s re-opening is not expected to come this semester, students planning to return in future semesters are excited to receive 41 additional parking spaces dedicated exclusively to students instead of staff and faculty.

Student Christian Ramirez, who has a parking permit and regularly parks on campus, said he would greatly appreciate more parking for students. Ramirez said he has to get to the college 15-20 minutes early to guarantee that he makes it to class on time.

Chemistry major Lissette Gutierrez, who also has a parking permit, agrees. She said, “Parking is really bad around 10 a.m.”

Gutierrez said she often parks in Lot 10 for convenience, as all of her classes take place in the Liberal and Applied Arts buildings. Lot 10 is one of the largest lots on campus, is mostly for students and is closest to these buildings.

She said she would use Lot 16 in coming semesters if it were reopened because she will be taking classes toward her major in either the Biological or Physical Sciences buildings.

Due to its proximity to these buildings, she said she would find it more convenient to park in Lot 16 than in Lot 10.

King said, “One downside is (Lot 16) is a non-ADA (Americans with Disabilities Act of 1990) compliant parking lot. Due to the hill, it presents a major cost to make ramps.”

Because the grade of the hill is very steep in this area, King said the idea of building ramps leading to and from Lot 16 is “inconceivable.”
He added there are currently two ADA-compliant parking spaces in Lot 17 near the west entrance of the Art Building, as well as many ADA-compliant spots in Lot 15 outside of the Music Building.

While outside of the M Building where he takes classes, retiree student and lifelong learner Jim Conran said he regularly sees students looking frantic while driving along Campus Drive in search of available parking. Often times the drivers glance in the direction of the vacant Lot 16, he said, which is fenced off with caution tape.

“It is a student-dedicated parking lot,” Conran said. “I bet if the staff needed more parking this lot would have been open for the past two years.”

After learning of the sinkhole underneath Lot 16, however, he conceded that if there was “clearly a physical hazard, then it makes sense to have closed it” when the college did.

Anthropology major Favian Audieri said that because he does not have a student parking permit, he regularly finds it difficult to find a parking spot near campus in the morning.

However, Audieri said he would rather take his chances than spend the $45 cost of a parking permit.