Students for Educational Reform group attends ‘The March for our Lives” 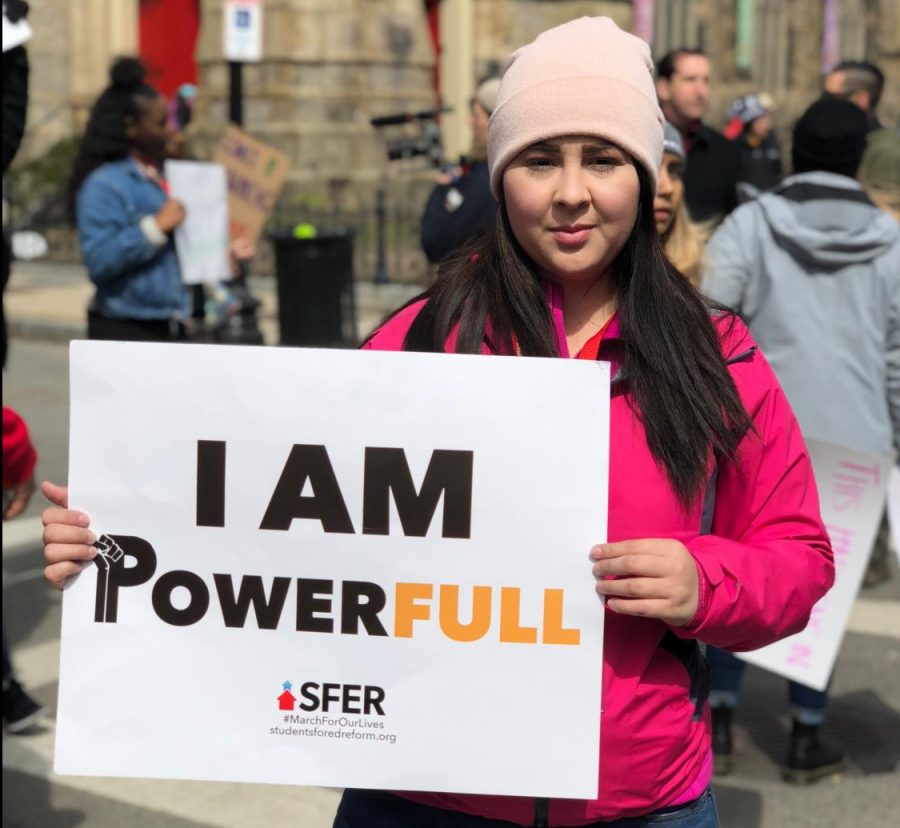 La Raza studies major Lizbeth Gonzalez holds a sign during the “March for Our Lives” action in Boston, Massachusetts on March 24.

Students from Contra Costa College have brought back organizing skills from “The March for Our Lives” that they plan to apply to their reform work with the West Contra Costa Unified School District.

The CCC chapter of Students for Educational Reform (SFER) was attending the organization’s national summit in Boston and the March for Our Lives, organized by survivors of the Marjory Stoneman Douglas High School shooting in Parkland Florida, was also taking place that weekend.

The CCC SFER chapter met with some of the organizers of The March for our Lives.

“The two students who spoke to us were Latinas. They saw that white students were getting a lot of attention, but the students of color were not getting the same response — even though they often come from more severely impacted communities,” SFER member and CCC La Raza major Lisbeth Gonzalez said.

At the march, the CCC SFER members said that it was important to raise the issue of the disproportionate effects of gun violence on communities of color.

“It does not matter whether the violence happens in schools, tourist destinations, movie theaters or through interactions with police,” SFER member and CCC STEM major Alfredo Mendoza said. “We need to take effective measures to prevent this violence and not just put another Band-Aid on it.”

“I found it valuable to see how marches play a role in politics,” Luis Ledesma, SFER member and CCC pre-law major, said.

There were politicians and public officials attending the march and speakers were calling them out and pointing to policy that needs to be changed, Ledesma said.

SFER runs campaigns in states across the country and is headquartered in New York. Each year SFER holds a national summit so members from different states can come together and talk about what we are working on, Gonzalez said.

Seven students from the CCC chapter attended the SFER National summit with the hotel and airfare paid for by the organization.

The theme of the summit was “I am Powerful,” with 100 students taking part.

The SFER mission statement is to train college students to be grassroots organizers who fight against educational injustice in low income communities, Gonzalez said.

“Every chapter comes up with its own goals and every semester we choose a campaign. We host community events where parents and students can speak about different issues, then we use that input to decide on a campaign,” Gonzalez said.

The CCC SFER chapter has two campaigns to improve K-12 schools in the West Contra Costa district. The first addresses “teacher retention.” This involves finding ways to slow the high rate of turnover in the district. SFER hosted a community panel and talked to different teachers in the district to find out why teachers are leaving. Teachers said that they cannot afford to live in the area with the low salaries, so they are forced to seek higher paying work in other districts, Gonzalez said.

SFER members, along with others, have been advocating for higher teacher pay and the district is now moving to increase teacher salaries by 15 percent.

The district is also working on providing housing support to encourage teacher retention and also to attract new teachers.

Creating a “positive school climate” is the second campaign that SFER is currently working on. This campaign is about holding school administrators accountable for “willful defiance suspensions.”

A high percentage of African- Americans and Latinos are suspended for minor behavioral issues, Gonzalez said. SFER members believe that this is the beginning of the school to prison pipeline.

A positive school climate is about providing more counselors for students who come to school with unresolved trauma, Gonzalez said. The school board recently passed a resolution that will address this issue and offer more support for students with disabilities and ESL students.

The trip to Boston was important to Gonzalez because she saw she is part of a larger movement.

“Before Boston, I was thinking that I wanted to be a really great teacher and help students. But now, I’m thinking that maybe I can have more impact as an organizer by changing policy.”

SFER offers paid fellowships for high school and college students in the summer before school board elections take place. SFER fellows choose issues that are important to them and then they go door knocking to discuss these issues in the community, Gonzalez said.