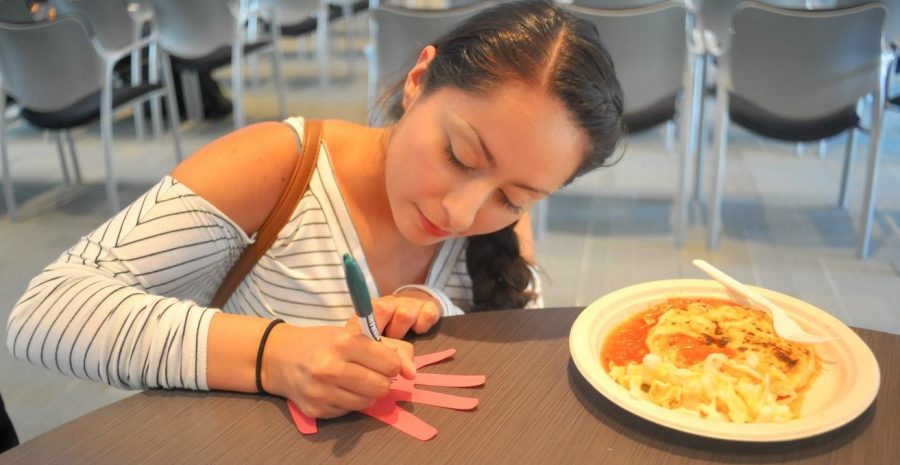 A Middle College High School student fills out a paper hand with a message of actions she will perform to create a healthier environment and raise awareness about climate change during the “Before the Flood” film seminar hosted in Fireside Hall on April 25.

The responsibility of protecting the future of the Earth has been handed to younger generations, so what better way to spread the message of impending planetary doom to college students than through the medium of film.

“Before the Flood” is a documentary that follows actor Leonardo DiCaprio around the world for a grim, first-hand look at the effects of climate change.

During the discussion, students talked about what struck them the most about the film and the best way to align themselves with the solutions that the film provides.

“It’s for Earth Day, so we thought what better club to do something for Earth Day than the Outdoor Adventure Klub,” club President Julissa Martin said.

“I thought it was important to bring awareness to this situation because people go day-by-day and do not think about this.

“We thought if we did an event to showcase what’s really happening (with climate change) people would realize that this is real and that they can do something about it,” she said.

After the film, students discussed the action points that the film outlined and how to implement the strategies in their own lives.

“This is the first time I’ve seen this film and honestly, what I found most helpful were the action items that the film focuses on at the end,” Associated Student Union Senator Christopher Miller said.

Adjunct biology professor Gregory Ponomareff said that he’s happy to see an event like this on campus and has noticed that students are having more conversations about climate change.

“I think you are seeing more evidence of threats to the environment in our daily lives now than a decade ago. As a result, people are more aware and there is a sense of urgency in the conversations,” he said.

The film emphasized the negative effect of farming on the atmosphere and students were especially concerned about the farming of beef, which releases a concentrate of methane — an extremely potent greenhouse gas.

Students were excited about the idea of developing hundreds of “giga-factories” (energy storing factories) that would allow the world to use sustainable energy.

“At the end of the film, they tell you what to focus on and it is OK. These are the starting points where you can do research and see what kind of (legislators) will be supporting positive change,” Miller said.

Miller said that knowing which political candidates will support bills that encourage clean energy and adding carbon taxes is important because those are people with the most power.

Martin said that she fears these changes with the climate because of the wildlife dying and nature in general being degraded.

“The physical things that are happening to the planet like the melting ice caps, sea levels rising and rain forests being cut down is concerning,” Martin said.

“Since I really love the outdoors, I want my children and grandchildren and everyone else to be able to enjoy a beautiful earth.”

At the end of the event, a $25 gift card for REI outdoor store was raffled off to attendees while they enjoyed pupusas from El Sitio restaurant.

Martin said, unlike the hikes they have already hosted, this is the club’s first on-campus event.

She believed it was a great turnout and plans on having more on and off campus events in the future.