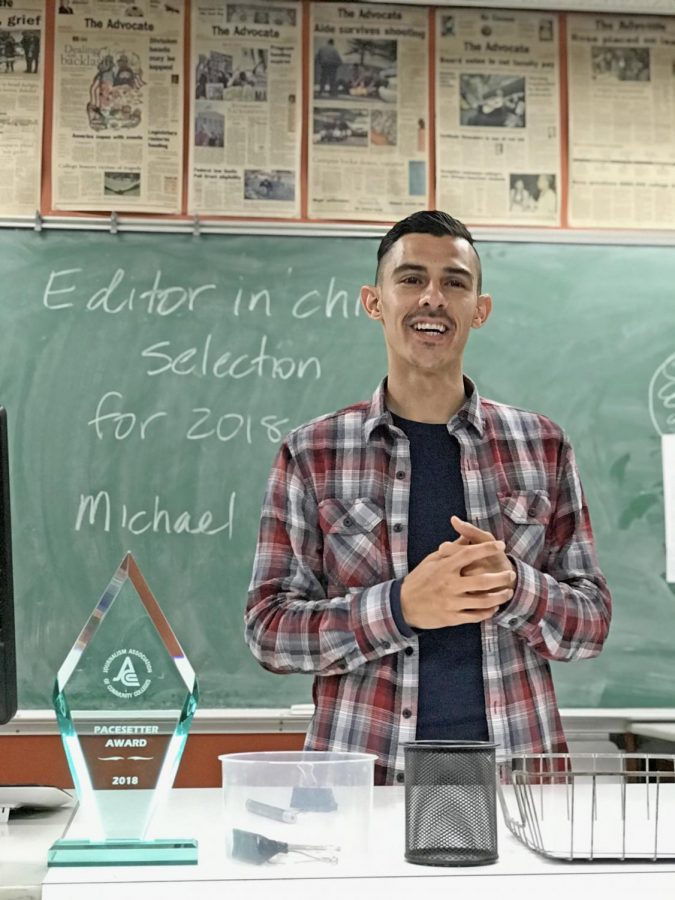 Newly elected Advocate Editor-in-Chief Michael Santone speaks to the staff during the election process on May 9 in AA-215.

The editor-in-chief position at Contra Costa College’s national award-winning publication, The Advocate, has for decades primed student-journalists for success at the professional level.

Current Associate Editor Michael Santone said his drive to become a strong journalist has drawn him to the highest position in CCC’s student news organization.

Therefore, Santone will take the lead as editor-in-chief of The Advocate, its website (cccadvocate.com) and its social media sites for the 2018-19 academic school year after winning an unopposed election during the News Production class in AA-215 on May 9.

Journalism department Chairperson Paul “The Kid” DeBolt said Santone has the ability to inspire people to do things they didn’t know they could do.

DeBolt said that running a student publication, as Santone will do next year, is always interesting because troubles always arise.

“The Advocate pushes (staffers) to do more,” he said.

Santone came onto the staff as a writer, but he has grown steadily through his four semesters contributing to The Advocate. Santone has branched out to broadcast journalism and even photography.

DeBolt said Santone is flexible and is very good with people. Because of that he has high expectations for Santone and the staff next year.

Associate Editor Anthony Kinney said Santone has the ability to be a role model to his staff because Santone sets a high standard for himself that he can use to motivate those around him.

“His (Santone) mindset is one of confidence. It reflects in his daily life,” Kinney said.

Kinney has worked with Santone for two years on The Advocate. They began writing for the news organization during the same semester.

After noticing that the pair shares an enticing chemistry through their conversations, they decided to produce a full series of podcasts called “Verbal Rhapsody.”

“A lot of the concepts and ideas we talked about were Michael’s ideas,” Kinney, Santone’s podcast co-host, said. “He always has drive.”

Santone said he has never been put in a situation like that of editor-in-chief (EIC) of a news organization.

A lot of the roles of the EIC will be new to Santone, but he said his organizational skills will keep things running smoothly and he hopes his communication skills will help him gain control of the fast-moving newsroom staff.

“I want to be able to get people to do what they are assigned,” he said. “I want to be a support system for them and help them learn how to write.”

Santone said the newspaper and its essence are important for the community college and the district as a whole.

He said there is a growing audience of people who want better news and a group of people that want to learn how to deliver that news.

Santone said that he sees that the younger generations are media-centric and look to online sites to find their news.

“I want to capture more people, get them to know about us and spread news through many platforms,” he said.

Opinion Editor Robert Clinton said if Santone approaches his editorship with the mentality of a venture capitalist, he has the opportunity to reorganize The Advocate to run at a higher efficiency.