Jahna Maramba proves her leadership on and off the court 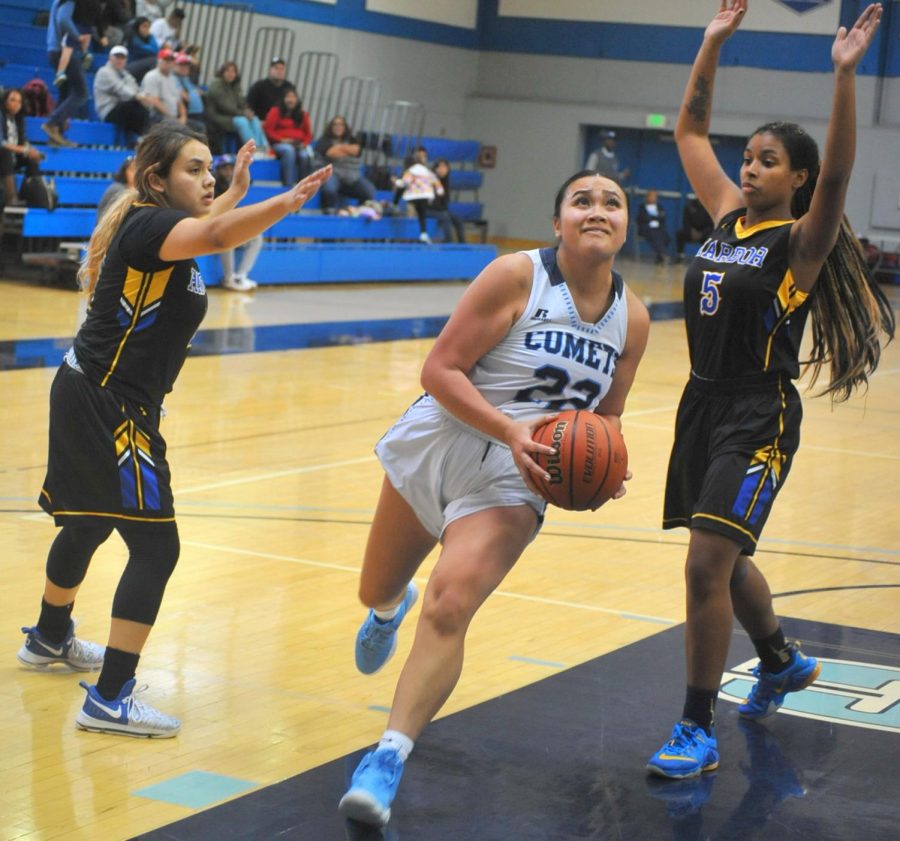 Since the dawn of time, leaders have been defined by their actions when called upon for duty. Leaders are expected to stand poised and prepared, ready to strike when their name is called. But more importantly, leaders are role models to their peers and an example of what is possible.

Comet forward Jahna Maramba is a true representation of a leader.

For her relentless effort on the basketball court, Maramba has been named The Advocate’s Female Athlete of the Year for 2017-18.

Stepping up as the Comets’ lone leader after star point guard Dierra Mize fell to injury midway through the season, Maramba showcased her indisputable skill through vigorous effort and admirable leadership in every Comet match-up. Her performance through the season earned her a spot on the All-Bay Valley Conference team this year as well as the opportunity to play in the Sophomore Showcase event.

Maramba accounts her successes on and off the court, to her unfaltering competitive drive and stiff-necked determination for overcoming challenges.

With Mize sitting out for the rest of the season due to injuries from an auto accident, Maramba took the opportunity to stand up and show spectators she too possesses the necessary skill and mindset to be considered an elite leader for the team.

“Being the leader on the court, you have to set the standard for the team,” the Comet forward said confidently. “I know if I’m solely focused on getting to the basket or getting back on defense, everybody follows suit. My attitude on the court is focused on team effort and team cohesion.”

Though the Comets suffered a losing season (6-20 overall and 3-13 in the BVC), the finesse-filled forward carried the offense as the team’s top scorer in most of the Comets’ matches, scoring less than 10 points in only four of the season’s games.

Willing to drive hard in the paint and draw the foul, Maramba finished the season third in the conference in free throw attempts.

Her season high in points came in an 87-62 loss to Butte College, in which she finished with 26 points. Maramba made 11 of her 15 field goal attempts and made it to the free throw line seven times, scoring four of her attempts.

Mize, who was selected as last year’s female athlete of the year and teammate of Maramba’s said she was happy when she heard that Maramba was awarded the honor.

“She put in work all season, holding it down on both offense and defensive,” the Comet point guard said. “She definitely deserves it.”

“We were both captains and after I got hurt she had to step up and do it by herself and she did a good job at it.”

Maramba’s determination also led the Comets in their last victory of the season, a 53-46 win against Yuba, where she made 3 assists, 3 steals, 5 rebounds and the team high of 23 points.

CCC’s women’s basketball coach Vincent Shaw said that Maramba always worked hard and was a team player on the court. He said though she’s an elite scorer on the court, she also has a selfless leader mentality that moves her to always look to get the ball in her teammates’ hands.

“She’s so unselfish. Some games demanded her to be more selfish but that just isn’t in her,” coach Shaw said. “She always plays hard and with a team spirit. She was a calming presence on the court, when she’s around, the vibe is good.”

Maramba recently committed to Holy Names University with an athletic and academic scholarship, which she considers her greatest achievement yet.

“I promised my mom years ago I would do it and I did,” Maramba said. “It was the greatest feeling in the world to hear her bawl with tears of joy. I just want to keep making her proud.”

Utilizing the same competitive instincts she relies on to impose dominance on the court, the business administration major plans on focusing on the management aspect of business when she enrolls at Holy Names in the fall.

Maramba said upon her graduation from HNU she plans to use her degree to secure a high-level role with Twitter, her former employer or apply at the tech giant Google for a team management position, two jobs that she feels being a leader on the basketball court prepared her for.

“I’ve gotten used to being a leader and comfortable with directing people. That confidence came from the court,” she said. “I also learn that it takes a team to win, no one can do it alone. Every good leader knows that.”