Drought ends but still no wins 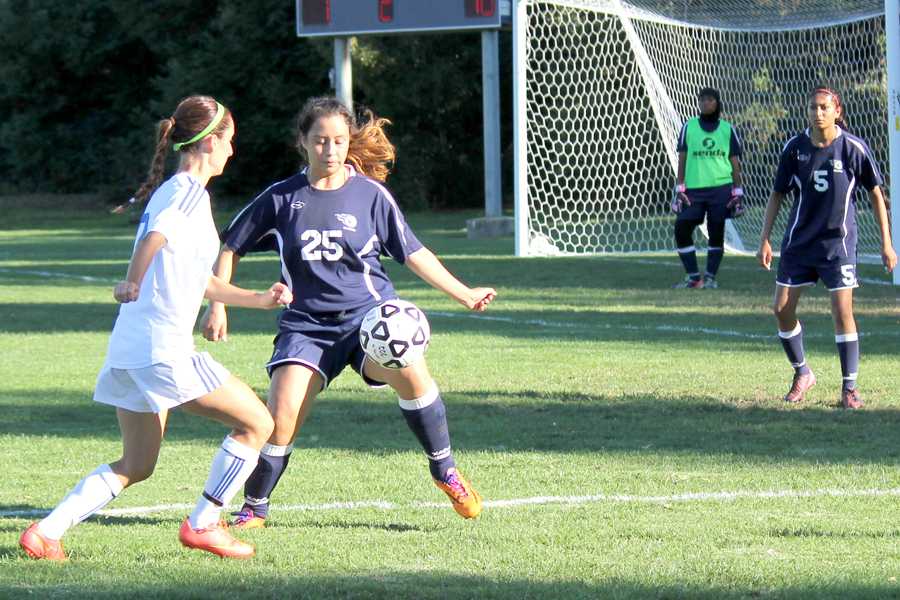 Comet defender Lizette Hurtado (right) tries to keep possession of the ball during CCC’s 8-1 loss against Solano Community College at the Soccer Field on Sept. 23.

A six-game scoring drought finally came to an end for the Comets (0-1 in the Bay Valley Conference, 0-8 overall), but it was not enough to thwart Solano Community College’s (1-0 in the BVC, 3-2-2 overall) potent offense en-route to an 8-1 loss Tuesday at the Soccer Field.

SCC oozed confidence the moment it arrived at the field. The first signs that this would be a long day for Comet coach Amanda Beckenhauer came early in the first half as Solano re-positioned for a far side corner kick score.

That goal started a deluge of shots sprayed from various angles throughout the CCC defensive third.
For the remainder of the half, the Comet effort to slow down the Falcons bore no resemblance to the defensive-minded team they had become nearing the end of the preseason. Solano sent CCC into the break searching for ways to climb out of a five-point deficit.

CCC forward Mayra Garcia took more shots in this game than she had in most of the previous games combined. Minimal scoring has become paramount on the team’s list of things to be addressed.
“I feel like we all know what we’re doing out there,” Garcia said. “Everyone needs to know what the next step is — what they’re going to do with the ball after they get it.”

Halfway into the preseason, Beckenhauer adjusted the pre-game routine, implementing shooting drills closer to game time so players enter the game with a more aggressive mentality.
“We took more shots today than we usually do,” Beckenhauer said.

Center Abigail Perez, who Beckenhauer hopes to become her consistent scorer, seemed to have let some scoring opportunities slip by. The Comets finished the game racking up 12 shots.
“It’s a comfort thing,” Perez said. “I prefer to kick the ball (with my right foot) but even if it’s not perfect I still have got to take the shots.”

Garcia’s earlier statement, that the players are not visualizing the next step, could not be more evident.
“I liked that they fought to the end,” Beckenhauer said.
The scoring famine came to an end on a late goal by CCC center Deanna Guzman. Guzman battled her way through teammates and defenders, and bodied a deflected ball into the net just past Falcon goalie Anna Castro’s outstretched right arm.