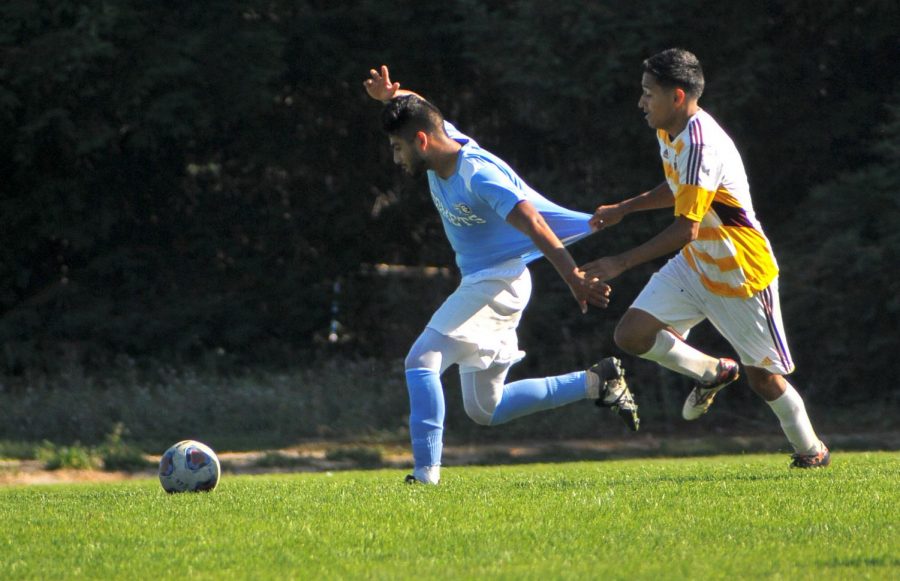 Midfielder Diego Garcia is challenged by a College of the Redwoods player during Friday's victory at home.

Prior to the 4-0 thrashing the men’s soccer team (1-3-1) put on College of the Redwoods (0-2-1) at home Friday, the Comets hadn’t earned a victory after three losses and one impressive draw against Fresno City College during non-conference play.

But in a game where Contra Costa College saw itself matching the same number of goals it had scored in its first four games, three of them came in a span of six minutes.

The second goal during that offensive burst was the one that solidified the Comets’ dominance over Redwoods.

In the 21st minute, CCC defender Raul Garcia, from the right-back position of the field, lobbed a ball over the Redwoods’ defense toward the middle of the top of the 18-yard box.

There, Comet forward Eduardo De Loa headed the ball on a high bounce into the back of the net while colliding with the Redwoods goalkeeper, giving the Comets a 2-0 lead.

“That’s our play,” De Loa said about the goal he and Garcia combined on. “That’s the chemistry we have from playing together in the offseason. That’s our go-to ball. Nobody ever expects that,” he said.

The offensive onslaught came after both teams played a relentlessly fast, back-and-forth early part of the game that made it feel like they were equally matched for the first 10 minutes.

Well, that feeling ended in the 19th minute on a set piece goal from Comet forward Alejandro Fernandez, as he finished a one-bounce lofted pass that came off the left foot of midfielder Diego Garcia as he struck the ball from the right side of the 18-yard box.

“I think it’s the quality of the players we have,” men’s soccer coach Nikki Ferguson said.

“We prepare for those things and so forth. At the end of the day the players make it happen. They were good enough to recognize the situation and then have the technical ability to do it. I can’t take any credit for that,” he said of his teams’ six-minute offensive outburst.

College of the Redwoods men’s soccer coach Kyle Van Dyke said, “We had some breakdowns, which happened with the first goal. It was a lack of focus on the set piece. We let that get in and we let that break us down.”

He said that it took his team a while to regain its momentum and in the second half the Corsairs played much better because they had more offensive chances.

One of those chances happened in the 60th minute of the second half. The Redwoods offense found itself on the left flank and tested Comet goalkeeper Humberto Melendez with a blistering shot that he dramatically dove to the upper side of the far post, deflecting the ball over the crossbar.

Following that save, the Redwoods offense was neutralized by the Comets’ ability to retain the majority of possession. That allowed CCC to play beautifully through balls to forward Eliezer Paul-Gindiri, missing a few goal chances until finally getting one in the 88th minute.

He said Paul-Gindiri was probably a little excited playing in front of the home crowd and wasn’t as composed as he usually is. But Ferguson was happy that Paul-Gindiri was able to get his goal.

The Comets will get some well-needed rest early this week but will continue the non-conference part of their schedule Friday at 4 p.m. at Folsom Lake College in Folsom.