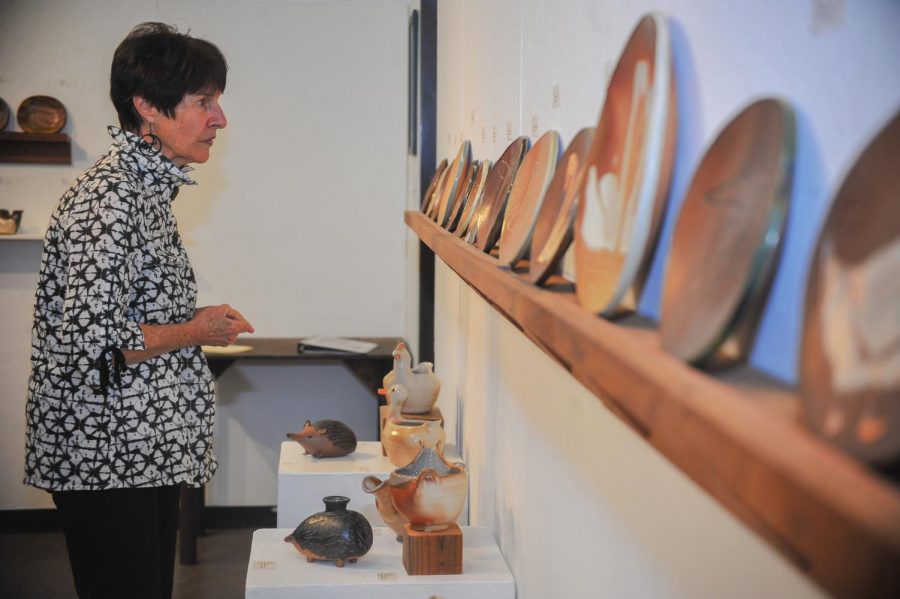 Antioch resident Cynthia Jameson looks at ceramic plates created by ceramics professor Mary Law and six of her students in the Art Building on Sept. 6.

Entering the Eddie Rhodes Gallery in A-5, pottery lines the walls neatly and visitors are met with the warmth of an intimate party.

The windows are high and show a soft breeze ruffling the trees outside, making the area seem bigger and more open.

The center of attention is Mary Law, who is showcasing her 50 years of making pottery, as well as six of her students.

The receptions for the show took place Thursday from 3:30-6:30 p.m. and Saturday from 4-7 p.m. The gallery will be open to the public through Sept. 27 to those who wish to view the exhibit.

Law has been an instructor of ceramics at Contra Costa College for 30 years, with this slated to be her last. That reality is part of the motivation for the event.

The professor only gave one reason why she wanted to showcase six of her former students’ creations along with her own artwork. She “needed the help,” Law joked.

She said her motivation for five decades of pottery-making is that it “suits my psyche.” She likes making things that are simple, functional, things that can be used.

“When I don’t know what to make, I sit down and get excited again.”

The gallery is full of former students of Law, many of whom have stayed in touch with her. Several continued making pottery after taking her classes.

Carolyn Maietta, who was a student under Law in 2000, described her former professor as “funny and generous.”

Maietta said what she loves about Law’s art is that “it’s substantial, it has heft.”

Margaret Norman, who was a student of Law’s in the 1990s and is one of the featured artists in the show said, “It’s a pleasure to watch her. She’s really good at seeing all the parts of your art.”

One of the more fawned over collections was the “soda-faceted,” oval plates depicting animals such as goats and sheep.

“Soda-faceted” means that soda is added to the kiln at the highest temperature to create an ash, which is used in the glaze. The method uses string to outline the animals in the clay.

The earth tones of the art against the white walls in A-5 gave a sense of calmness as attendees walked through the exhibit.

The space is one that not only allows familiarity, but encourages it. Outside in the hallway a simple buffet of hors d’oeuvres and fresh fruit was served.

“This (CCC) is my favorite place,” Law said. “I think as much as any other reason is the immense diversity of the student body. And the staff. I think it really reflects who the Bay Area is. I feel like some of the (colleges) where I’ve taught have a more moneyed community, a place that’s more well off. I feel like the students didn’t appreciate what they were offered as much as they have here. So I just feel a really strong connection to this community.”

If you’d like to see more of Law’s art, she has a studio at 1421 Fifth Street in Berkeley.