ASU president goes above board to cancel program 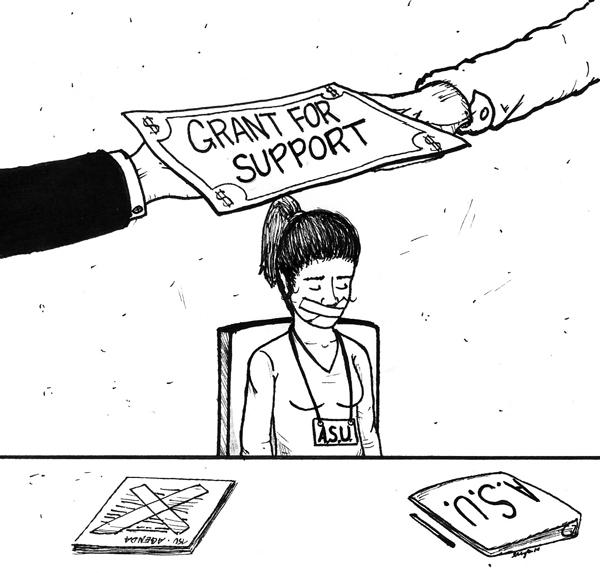 Presidential fiat is one of the worst ways for a decision to be made.
Associated Students Union President Antone Agnitsch used just that when he decided to “freeze” the ASU’s Grant for Support program. The Grant for Support program is a program the ASU started in order to give money generated by the student activity fee to student or faculty groups that petitioned the board for funding.
Agnitsch has alleged that the money surrounding the program was mismanaged. He also claims that faculty members who “wished to fund extra credit projects for their students” abused the program. Agnitsch’s claims may have a certain validity to them, yet that hardly excuses denying the ASU board the chance to do what they were designed to do — vote on the issue.
Little protest was made against Agnitsch’s decision, but even by his own admission the board is “new with a lot to learn,” and the chance to make the decision should be presented to them.
Yet debate on the subject was still present. Senator Luanna Waters said the Grant for Support program did a number of things to benefit students directly, including purchasing new equipment for the Fitness Center.
The fact that there is any debate whether the program was a positive or a negative thing shows that the decision to cancel, postpone or go forward with the program should be left up to the board.
Any validity that the student activity fee has is from the fact that to spend it, a group of elected students must vote on how. The moment any single person decides to exercise what is effectively a veto, a power that is granted to no one according to the ASU’s bylaws, the integrity of the entire board is compromised.
Agnitsch said the board has much to learn, yet his own actions have denied the board that opportunity. There is an easy remedy to this error, and that would be to present the Grant for Support program to the ASU Board, and allow the members to voice their opinion and then vote.
The decision to enact or cancel a program that involves the student activity fee should be left to the student representatives that are there to be the voice of the students who paid for the fee.
If that is not the case, then the fee should not exist. The student activity fee generates a lot of money for the ASU every semester, and that money needs to be monitored closely to ensure that the proper democratic process the ASU was founded upon is actually followed.
The members of the ASU are either elected, or must present at least 25 student signatures to the board in order to be members. This is supposed to be a sign of support from the students these senators represent.
Denying the individual members of the board their voice is the same thing as denying the rest of the students at Contra Costa College the chance to be heard.