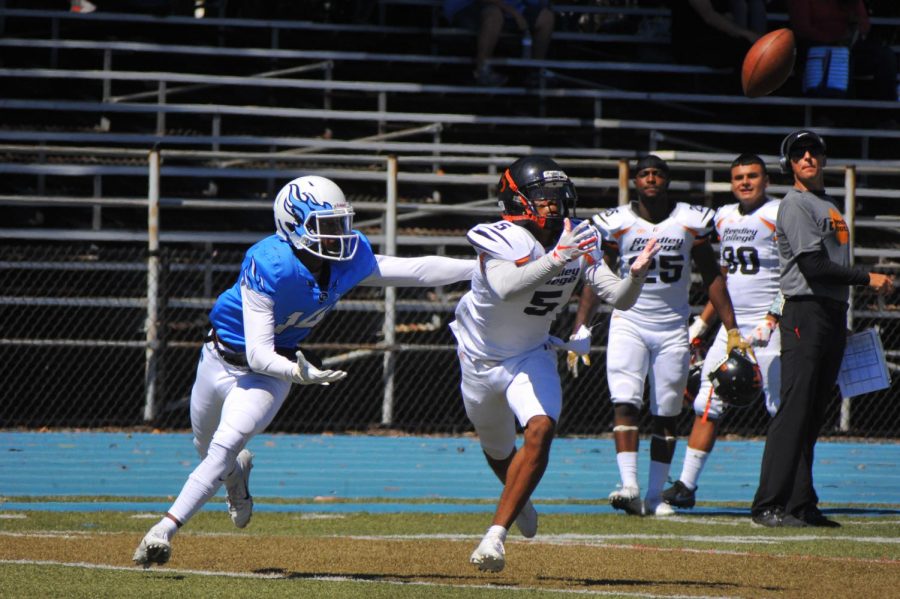 Despite improvements on special teams and offense, the football team’s inability to cut down on the number of penalties it committed hindered its chances for victory Saturday at Comet Stadium.
In the 50-20 loss to Reedley College (3-0) Contra Costa College allowed the Tigers to jump out to an early 21-0 lead after an interception, turnover on downs and a punt.
“The reason we lost this game is because we didn’t play our game,” Comet quarterback Jalen Tregle said. “We shouldn’t be looking at the scoreboard. We keep shooting ourselves in the foot and end up playing catch-up ball.”
Tregle’s 14 completions on 32 passes generated three touchdowns and 300 passing yards and led the Comets (0-3) to a season high in total offensive yards with 377.
CCC also totaled a season high in points, but it wasn’t enough for the team to come out victorious.
Tregle said that he felt fine and calm during the game.
“We weren’t getting it today and we need to score (earlier),” he said. “We came out in the second half and got the ball rolling, but it was just too late. You have to strike when the iron is hot.”
CCC’s biggest play of the game was also a play that showed the way they played against Reedley when Tregle connected with receiver Trevante Daniels for a 68-yard touchdown.
Reedley College coach Eric Marty said, “They (CCC) have some really talented athletes. The quarterback (Tregle) was able to put the ball into open space and that allowed them to make some big plays.”
He said his team tackled well, however, they did have breakdowns when facing the athletic Comet skill position players — like on the 68-yard touchdown pass.
After the big play, there was an unsportsmanlike conduct penalty called on the Comets, which the Tigers took full advantage of. On the ensuing kickoff, Reedley’s Jamon Chambers returned the ball 39 yards for a touchdown, extending the lead to 28-7 with 6:35 remaining in the second quarter.
Comet coach Pat Henderson said, “I think we had an opportunity to see some guys step up, which was good. We’d get some good plays and then there are the self-inflicted wounds.”
He said there were too many unnecessary penalties throughout the game and he understands that mistakes happen, but in order to realize their potential, all of the emotional stuff that goes on with his young players has to get cleaned up.
The Comets committed 16 of the 31 penalties in the game, but those 16 flags resulted in 238 penalty yards against the team.
“Obviously we have a lot of discipline issues that we have to clean up with this young group. We’re working on it. It’s a work in progress — we just need guys to mature,” Henderson said.
He said he was happy to see better performances from the offense and special teams since both of those units had been struggling in previous games.
CCC will have to find a way to clean up those careless mistakes if it wants to return to the days of Comet football dominance.
“The biggest thing is to get the film up because that’s a great resource. We struggle not being able to have the access to the resources that we would like,” Henderson said.
Tregle said that improving on these mistakes comes first with players having “a commitment to the program” and that because of everybody “not buying in” is hurting the team the most.
This team manages to show burst of greatness but it is almost always diminished by the penalties.
The Comets next opportunity to fix these mistakes and to record their first win of the season will come on Saturday against the College of the Redwoods at 1 p.m. in Eureka.