Annual event brings together local businesses for a day of fun 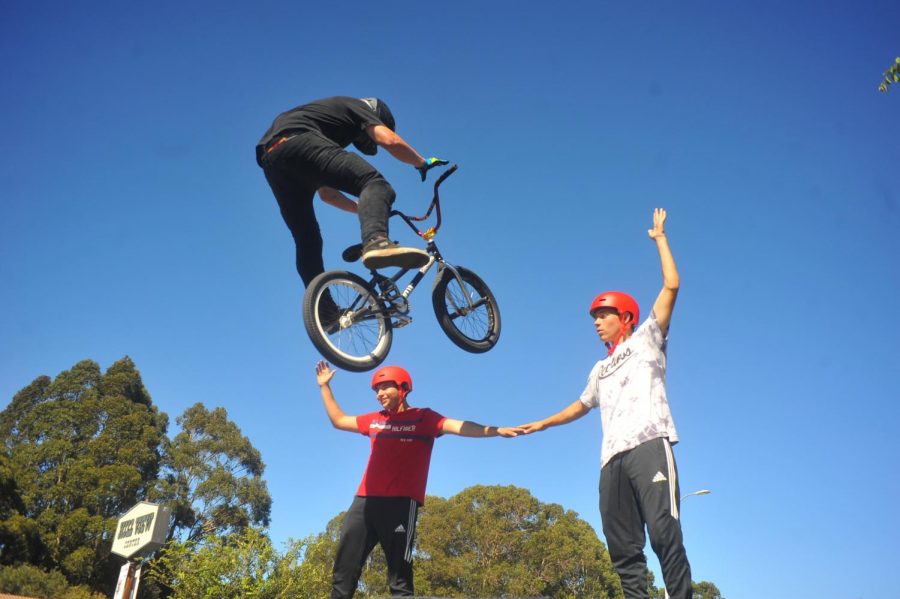 An Air Time Action Sport cyclist jumps over two boys as part of a performance during El Sobrante Stroll on Sunday.

EL SOBRANTE— The early weeks of September bring about a familiar sight of local families and inquisitive visitors sampling local wares and happily walking the streets of the sleepy East Bay town of El Sobrante.
The El Sobrante Stroll is an annual event held every second Sunday of September.
The stroll brings together a diverse group of vendors and spectators along a half mile section of San Pablo Dam Road from the El Portal intersection stretching to the Appian Way intersection.
Volunteers from various local clubs and business began setting up tents, inflatable jumpers and directing traffic early on Sunday morning in preparation for the foot traffic.
Food trucks were strategically positioned throughout the road and were serving a variety of barbecue, fried foods and shaved ice for adults and children.
As the day progressed, classic cars and their owners parked alongside San Pablo Dam Road to display the craftsmanship of vehicles of a variety of different makes and models.

One of the businesses that is instrumental in the success of the event is the El Sobrante Town Garage. The garage, which is located at the very center of the stroll’s half-mile section of the Dam Road, has been open for decades and has won the El Sobrante Chamber of Commerce Business of the Year.
“The owner, Mark Coroda, is a local figure here in El Sobrante and has owned this body shop for decades,” Jose Velarde, who manages the auto repair side of the garage, said. “Some of these cars are part of his own collection and some of these belong to locals who use the stroll as a way of displaying their work.

“Not only does the shop help organize this (the stroll’s car show) as a way of displaying our own craftsmanship and skill,” Velarde said, “it’s also to give our local automotive community a car show they can take part in.”

The event is a way for businesses along the Dam Road to give back to the local community in El Sobrante and bring a day of fun to those who visit or live locally.
A few motorcycle clubs, like the Hell’s Angels and Sons of Satan, set up tents to sell merchandise right alongside church groups such as the Bay Hills Church and the United Methodist Church, which sang spiritual songs to spectators.
Many live performances were held throughout the event while the viewers danced and ate.
Lidia Valdez, who resides on San Pablo Dam Road, enjoyed the music and festivities.
“I come here every year and it’s good to see our small town being enjoyed by many people who don’t know anything about it. Local pride is good for everyone,” she said.
The afternoon also featured a bicycle show, displaying the skills of a few local BMX talents.
The crew performed stunts on a ramp set up just before the intersection of San Pablo Dam Road and Hillcrest Drive.
The performers’ ages ranged from grade school to late teens, but all of them showed the onlookers their skills by spinning their bikes in mid-air before re-seating themselves with just enough time to stick the landing.