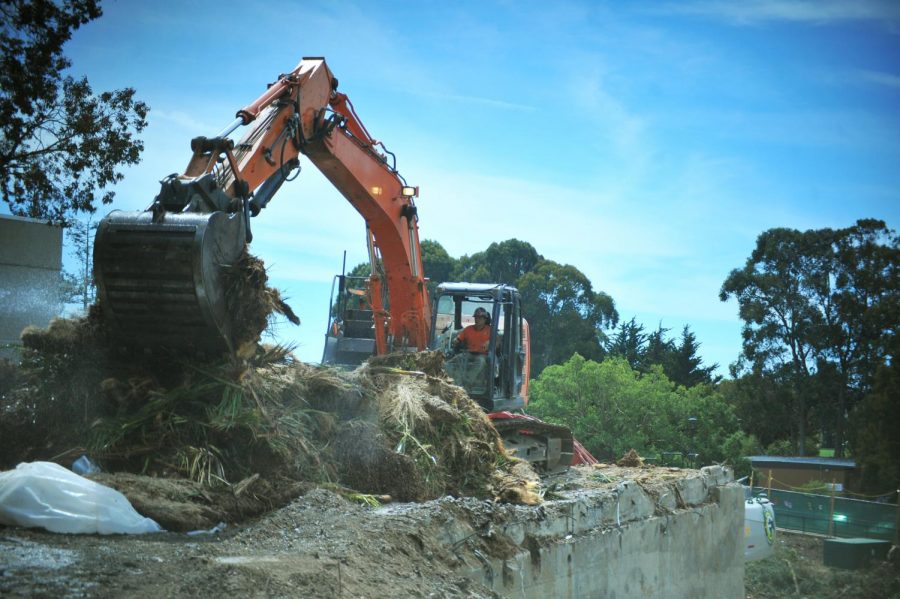 An excavator operator halls debris from one area to another during the demolition of the Health Services Building on Sept. 12

Students who have ventured into the Applied Arts Building lately may have noticed the construction site next to it — it’s hard to miss.
Prior to students arriving for the fall semester, demolition of the former Health Science and Liberal Arts buildings has been well under way.
The tear down should be finished by November, but the grading process could take until April, pending weather conditions. The HS Building is already a thing of the past as it’s been torn down and its pieces hauled away.
As the rainy season approaches, the completion date of the project isn’t a sure thing. However, the official date for substantial completion of the demolition project is Jan. 15.
This will be the first phase of constructing the Science Complex that is due to be completed by 2023.
Central Valley Environmental is the company tasked with tearing down the building. Jeff Wilson, the CVE project manager of the company, said, “Everything’s on track right now and we’re working with the (Contra Costa Community College) district to get it out of the way.”
The foundation of the HS Building was built so well that three hammers have broken during the process. Wilson said these equipment malfunctions are typical in a project like this.
The cost for the entire project, from demolition of the Health Science and Liberal Arts buildings to the construction of the Science Complex, is $68.86 million.
Building and Grounds Manager Bruce King says that the college is still waiting for the Department of State Architects (DSA) to give them the approval for their Science Complex construction plans.
Once the district gets the approval, it will put the project out for bid. And once a general contractor is approved, construction will begin on the Science Complex.
“The DSA is the process all public schools in California have to go through. It’s like getting blessed by the pope,” King said.
Currently, the demolition is proving to be a nuisance to students in the Applied Arts Building, which is a neighbor to all the commotion.
When asked the effect the CVE of the LA and HS buildings have had on her, Gateway to College student Sierra Schmidt said, “I have a class in the AA Building every morning and it’s very distracting. Today (Monday) was so bad because they were using a jackhammer and it shook the entire building. Another reason is it takes longer to get around campus with the pathways (around the LA Building) cut off.”
Administrators are sure the disturbance will be worth it once the Science Complex is completed in 2023. Replacing the rubble will be a 50,000 square foot cutting-edge center for CCC science students and staff.