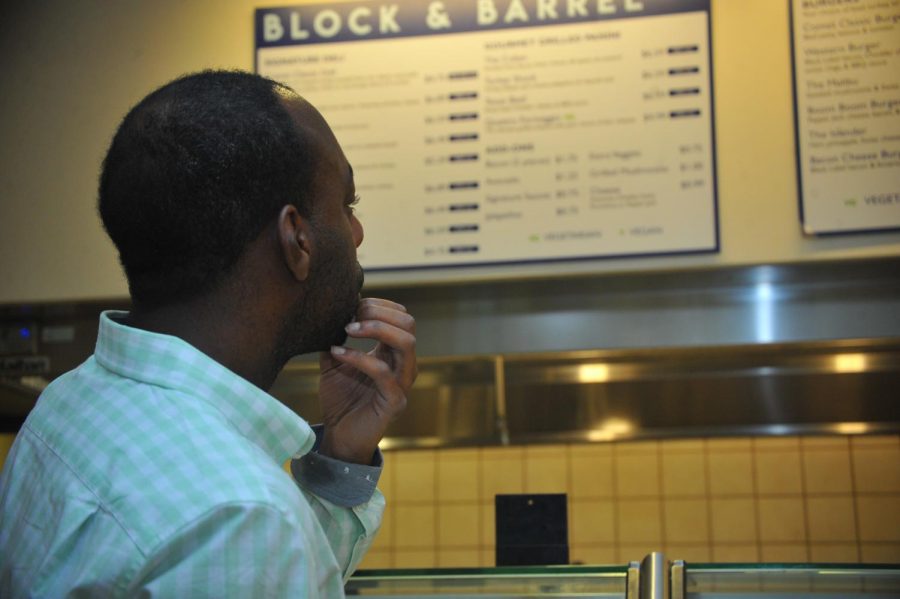 A student looks at the menu before ordering at Brix cafe on Wednesday.

Brix cafe raised its prices for a second consecutive year, putting students in a strain to find an affordable meal on campus.
Last year, the only vendor-based eatery on campus, had a significant increase in its prices and this fall students were hit with another 10 percent fee hike.
In comparison, the cost for a Margherita pizza was $5.94 in 2017 and this term students have to pay $6.59 for the same product.
Director of Business Services Mariles Magalong said she was not aware of the new prices. Brix managers are not compelled to announce their price changes, but there are price guidelines they shouldn’t exceed, she said.
“They are on a three-year contract,” she said, “After this fall, they will decide if they want to renew the contract with us, (and we will decide) if we want to renew the contract with them.”
Simultaneously, Pacific Dining, the parent company of Brix, expressed its concern for the low margin of profits they are getting from the establishment at Contra Costa College.
Richard McMahon, a representative of Pacific Dining Food Service Management, said, “We have found our prices to be extremely competitive. Dramatic increases in labor costs as well as a steady increase in food prices are what determine our pricing. These same pressures have squeezed our vendors and produced a business climate that is daunting, to say the least.”
If Pacific Dining doesn’t renew its contract with CCC, the district will request proposals from other food companies that will adhere to the college’s guidelines.
The process usually takes a couple of months to complete.
“It will be hard to find new vendors because they have to compete with Pronto, Aqua Terra Grill, and the McDonalds just across the street from campus. There, you can get a hamburger for less money, but at Brix you are getting a better quality, such Angus Beef,” Magalong said.
Pronto, run by the culinary arts department, has better prices but choices are limited. For example, currently American Grill Cheese sandwich at Brix costs $3.99, while at Pronto the closest equivalent is a ham and cheese/egg croissant which costs $2.
English professor Brandon Marshall said, “Food is terrible at Brix. The only decent place to eat on campus is (culinary arts department’s) Aqua Terra Grill, but they don’t take (credit) cards and I don’t carry cash with me. They also take checks but who carries checks with them?”
Students are starting to feel the burden of the high cost of a meal on campus and are employing new ways to stretch their budgets.
“I used to eat often at Brix. The service is great, and (employees) are cheerful, but it’s getting too expensive. Now I eat there sporadically. I have to alternate between eating at Pronto and bringing food from home,” La Raza studies major Cinthya Zuñiga said.
In an effort to help those students who struggle to find the means for their next meal, the Student Life Office is offering free breakfasts every Monday-Thursday from 8:30 a.m. to 10:30 a.m. at Pronto.