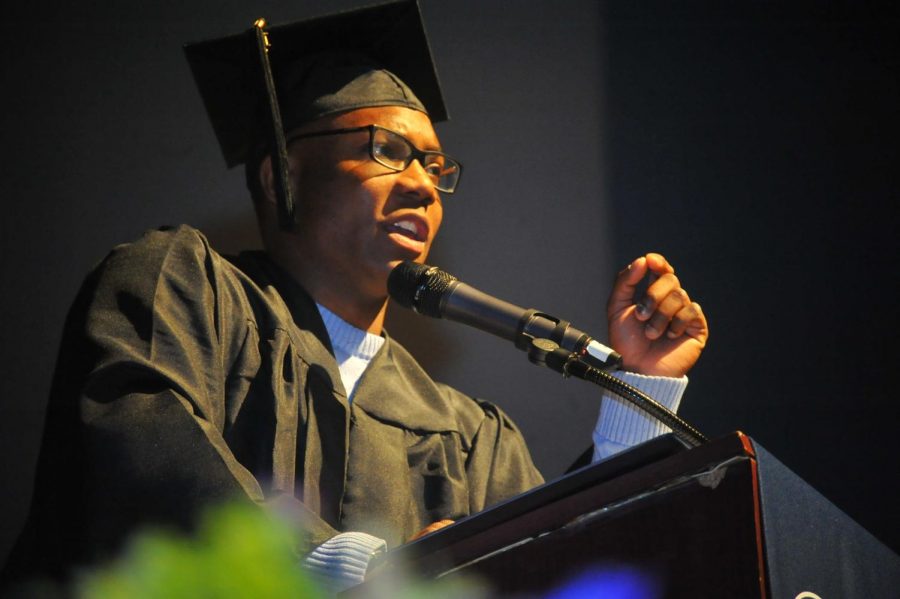 Associated Student Union President Alexander Walker-Griffin gives a speech to the Contra Costa College graduation class of 2018 during the graduation ceremony at the Richmond Auditorium on May 25.

After committing to transferring this fall to Saint Mary’s College in Moraga and running for Hercules City Council, Alexander Walker-Griffin will be vacating his post as Associated Student Union president come Dec. 14.

“I’m going to miss being able to have a place to call my second home,” Walker-Griffin said. “The ASU has really allowed me to get to know my community. It’s allowed me to grow as a person and help put myself in an even more comfortable position for what I want to do in the future.”

Walker-Griffin, who has been a member of the ASU leadership since 2016, has presided over the weekly Wednesday meetings as president since 2017.

“I actually did not have plans to ever run for (ASU) president but I received a lot of support, which made me want to run,” he said. “I pretty much just wanted to continue to be a voice for students at a level where I could have more interaction with faculty members on a more consistent basis allowing for the concerns of the students to be heard regularly.”

Student Life Coordinator Joel Nickelson-Shanks said Walker-Griffin’s departure is tough for him and the whole ASU Board.

“Things change, leadership changes. It’s going to be difficult at first. But current ASU members will have to step up and make their own progress,” Nickelson-Shanks said. “His (Walker-Griffin) leadership and connection to the political world will definitely be missed.”

Once Walker-Griffin vacates the position, current ASU Vice President Chris Miller will take over as interim until elections are held at the end of the spring semester.

Miller said he never planned on taking over as president, but both Walker-Griffin and Nickelson-Shanks have been preparing him for his newly inherited role.

“I knew it was bound to happen at some point, but I didn’t realize how soon the date for his transfer was coming up,” Miller said. “I thought to myself, ‘No way this guy is really moving. Am I going to have step into those shoes?’ So I immediately started panicking for a quick second, but then came to realize that it’s not fair for him to stay at CCC forever.”

Miller, who has been a part of the ASU since 2017, said he will use what he learned as vice president of the Community Organizing and Political Action (COPA) club to help guide him through his interim presidency.

“We have a lot of young, impressionable Middle College (High School) students (in the ASU) so my plan is to cultivate them into being leaders and adjusting to their needs based on their student population. They are the future,” Miller said. “My influence has always been through the arts, music and activism.”

Nickelson-Shanks said Miller has a different kind of energy, which he brings to the ASU Board that radiates throughout the entire room.

“Chris is a dreamer,” Nickelson-Shanks said. “He has a real connection with students and thinks outside of the box. He is new to the position, but I’m sure he can handle it.”

Walker-Griffin said Miller has everything it takes to be a great ASU president, as long as he takes time to listen to students and follow up with administrators.

“The ASU is in good hands. I have complete faith in Chris.”