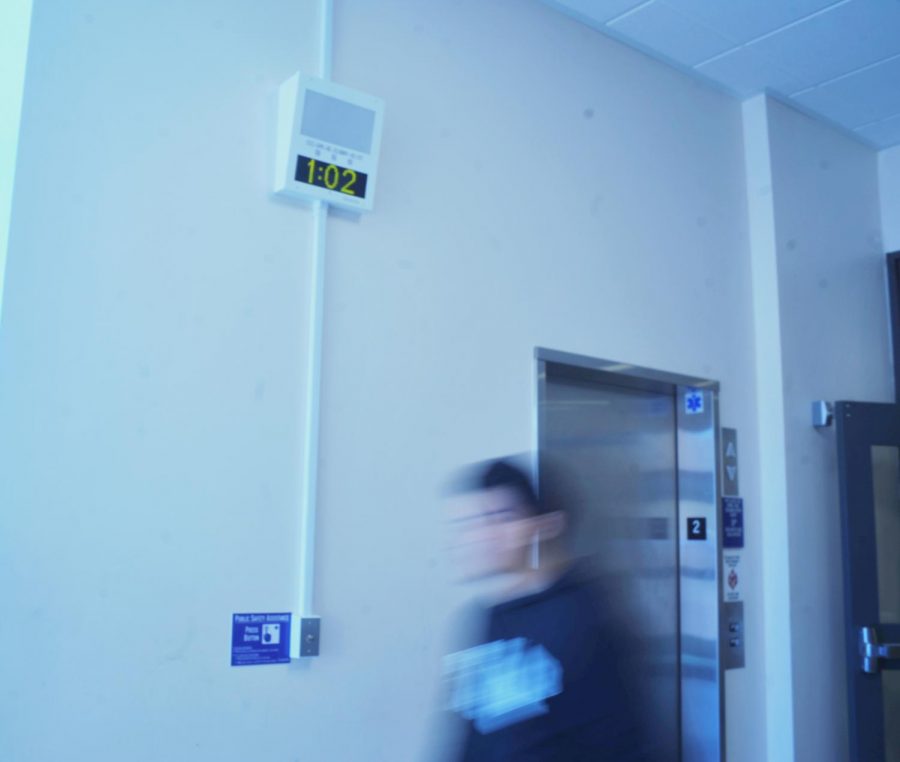 A student walks past one of the campuswide alert system boxes set up in the hallway of the second floor of the General Education Building.

To give each classroom and corridor the feel of being part of an interconnected network, old, new and refurbished buildings on campus have been given a new method of conveying real-time information to Police Services.

The campuswide emergency alert system is finally up and running at Contra Costa College.

This is first semester that the system, initially only found in new buildings, is fully operational throughout the campus. Every classroom and building on campus is now outfitted with a two-way screen and speaker system that, with the push of a button, connects users directly to Police Services in case of an emergency.

Police can communicate with all the speakers at once but cannot activate them separately. This means officers can only hear from individual units if the button in the classroom or building is pressed first.

The devices cannot be used to monitor what is happening in classrooms.

Sometime during the upcoming week, Police Services will test the two-way screen and speaker system and the District Regroup Notification System.

A brief message will read “TEST TEST TEST” where the time is usually shown, with nothing needed from those in the building or the classroom.

To minimize confusion, the test will be conducted when the campus is closed or there is a low volume of people on campus, Holt said.

According to Buildings and Grounds Manager Bruce King, Contra Costa College was the last or the three district campuses to have them installed over the summer.

The decision to install a new emergency alert system in every classroom across the Contra Costa Community College District was approved in July by the Governing Board and “the project took about three to four months to finish,” King said.

Information about the purpose of the new system, and a clear outline of its features, has yet to be widely shared with students.

Of the students who were asked about the new emergency alert system, many said they were not even aware of the purpose the speaker boxes serve.

Middle College High School student Shreejal Luitel said, “The purpose is helpful because in some classrooms you get no phone signal and it would be hard to reach anyone outside in case of an emergency in those classrooms.”

Shreejal said there are improvements that can be made to the alert system.

“I feel teachers and staff can do a better job of informing us about the new technology,” she said. “The only reason I know what they are used for is because my friend pressed the button by accident and someone talked to us on the speaker right away. I think if students knew about it, we would feel safer. The best thing they can do is inform us about the speaker boxes.”

Since the system is still in its infancy, neither the campus website, contracosta.edu, nor the district website, 4cd.edu, has any information on the devices.