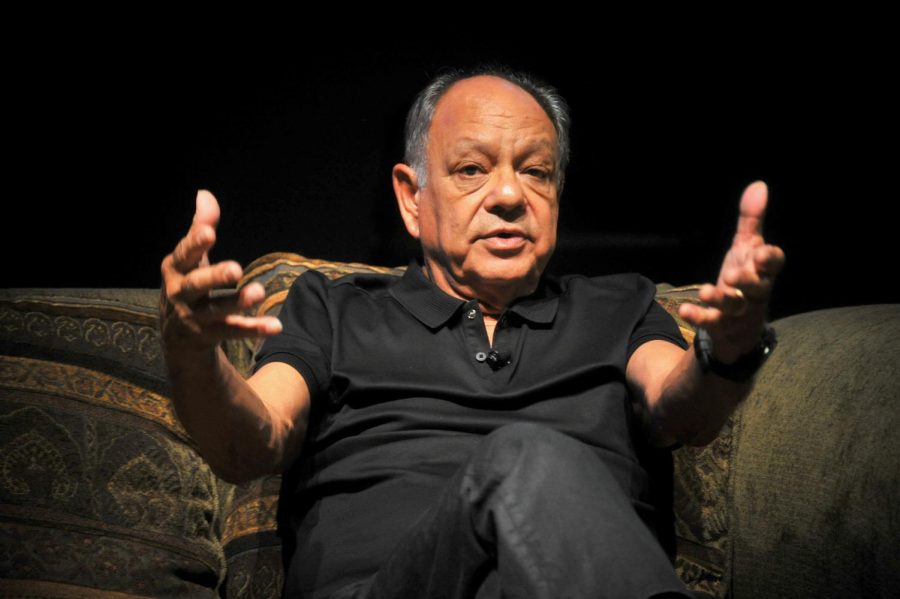 Seated leisurely on a large couch on the Knox Center stage, Richard Marin emphasized the importance of education and a culture’s representation in the art world amid stories of his own journey from working small shows to becoming the celebrated comedian mononymously known as Cheech.

Marin said he is slated to open a Chicano art museum in 2020 in Riverside, California featuring many pieces of art from his own substantial collection, which has been presented at over 50 museums around the world.

When trying to show his collection at museums, Marin met resistance due to it being a private collection.

Najera is the founder of Latino Thought Makers, which hosted the event and is dedicated to showcasing the careers of influential Latino role models. The series is geared toward Hispanic Serving Institutions. The evening was sponsored by Contra Costa College, the CCC Foundation and Chevron.

The already constructed living room set for the upcoming drama department play “Vengeance: A Ghost Story” served as a fitting set for the conversation because a frequent analogy Najera uses for Latino Thought Makers is a living room.

Marin talked about his rise in the comedy world starting with working in small comedy clubs and exploding in popularity with his popular comedy albums and cult classic film “Up in Smoke” with longtime collaborator Tommy Chong as Cheech & Chong.

After leaving the United States in protest of the Vietnam War, Marin met Chong in Vancouver. One particular story Marin told was the duo’s experience working in a strip club doing improv comedy sets and turning it into a successful running gig.

Marin and Chong convinced the girls to join in on the improv sets and started advertising it as “naked improve,” which attracted a lot of the locals.

“It became a hit out of nowhere. We had this improv thing going, naked improv. About as much fun as a kid could have — smoke dope and naked improv,” Marin said as laughter filled the Knox Center.

Once the two moved back to Los Angeles they started touring comedy clubs and had the ability to appeal to a diverse range of audiences.

While the duo’s touring schedule exploded, they were still recording comedy albums, which presented a unique challenge.

Marin said they had to figure out how to make the comedy engaging with only sound. They started to record their own sound effects and, through multi-tracking, they could use pan effects and craft the sound for people using headphones.

Aspiring actress Karla Carrasco said she came to the event to hear Marin’s story of how he broke into the acting world.

She said she likes listening to actors talk about their experiences.

Later in his career Marin’s passion for art led him to begin collecting. He said he has a background in classical art, which left contemporary art as a gap in his knowledge.

“I started going to contemporary art galleries in (Los Angeles) and started seeing all these great Chicano painters,” Marin said. “How come these guys aren’t getting any traction? I said, ‘Well, I’m going to start collecting them.’”

The lack of representation of Chicano art in the art world is a key issue Marin’s Riverside museum is looking to address.

“The art is empowering because (before) the experience was you didn’t see any of your culture or people who look like you or your neighborhood.

“If they don’t have pictures you can relate to, they aren’t talking to you,” Marin said.

CCC graduate Luis Ledesma said hearing Marin’s personal story was inspiring and reflected many of the notions of representation that echoed through the evening’s conversation.

“I think it’s cool being represented (by Marin) and seeing someone that looks like my family or myself,” Ledesma said.

The “love of learning” was a phrase frequently used by Najera and Marin when discussing the importance of education. Both of them emphasized instilling the love of learning into children early in their lives to make learning an exciting and rewarding experience.

For Marin, his cousin taught him to love art and to love learning about it.

After his cousin challenged him to learn about art, Marin went to the library for understanding, which set him off on his lifelong pursuit and passion for art.

Najera spoke about instilling the love of learning into his children while also continuing to learn things himself.

Marin said, “Education is the most valuable thing you can possess. Make sure you tell (your kids) every day ‘you’re going to go to college, you’re going to get a degree.’”