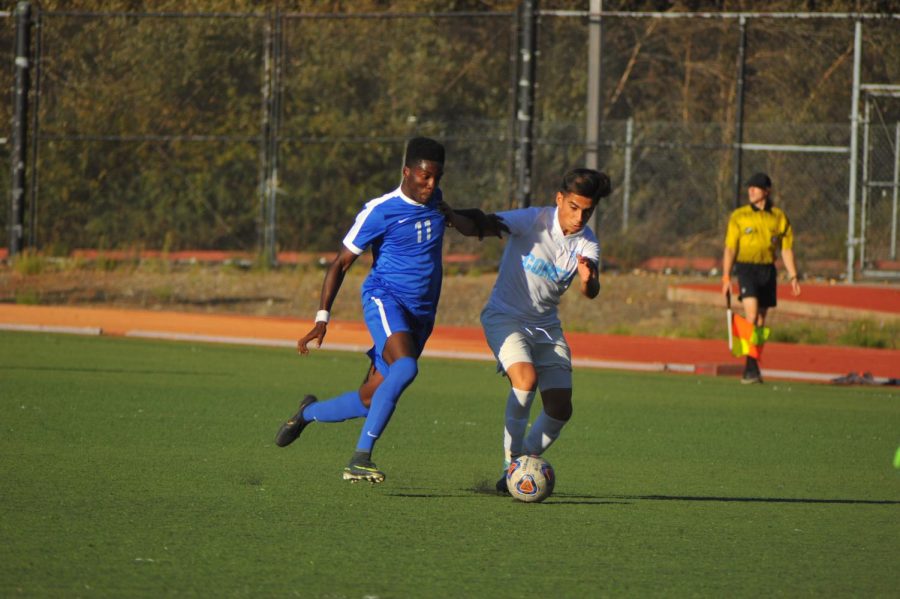 In a battle for sole possession of first place in the Bay Valley Conference, the men’s soccer team (1-1-2 in the BVC and 4-6-4 overall) struggled to get through the stingy Merritt College defense in a 1-0 loss Friday in Oakland.
The Thunderbirds (3-0-1 in the BVC and 7-1-5 overall) managed their third shutout in four games, while frustrating the Comet offense by “parking the bus” throughout the match.
With the loss, Contra Costa College has been leapfrogged by second place Mendocino College in the BVC standings leaving the Comets in third place.
The deciding moment of the game came in the 60th minute when Comet defender Raul Garcia gave up possession as the last man, which gifted Merritt the lone score of the game.
Garcia said, “I thought of two things (at that moment), either passing it back or kicking the ball out. I didn’t want to give a bad ball to the goalie for him to clear.”
By the time he figured out what to do with the ball it was too late, as he had lost it.
“It’s on me,” Garcia said. “The guy was quick and I didn’t react fast enough.”
What changed the complexion of the game was the injury that Comet midfielder Nick Silva sustained midway through the first half. Up until that point, CCC was the dominant team when it came to possession, shots and set pieces.
Silva’s injury showed how important his presence is to the CCC midfield.
“He’s (Silva) a huge piece for us centrally,” CCC coach Nikki Ferguson said. “He does a good job and is the physical presence on the team.”
The game became an open back-and-forth contest once Silva left the game.
The match was compelling for the duration of action, despite the lack of scoring action.
Thunderbird coach Geoffrey Aguiar said when CCC lost Silva, it made a huge difference in the game.
“We were able to knock the ball around a little better after he was injured,” Aguiar said.
The “park the bus” defensive style that Merritt imposed on the high-powered CCC offense is something that the Thunderbirds have relied on this season.
“We know that Contra Costa is going to have a good team every year. They are a conference powerhouse. We knew they were going to come at us and have a lot of chances and our strategy was to try to hold on to see if we can get lucky — which we did,” Aguiar said.
CCC came into this game after a 7-1 thrashing of Yuba College on Oct. 9. But for the majority of its BVC games the team has been in a scoring slump.
Before the scoring outburst against Yuba, the Comets had only scored one goal since their Sept. 19 2-0 win against City College of San Francisco.
The Comets will look to find consistency in their offense against non-conference opponent Modesto Junior College on Tuesday at 4 p.m. on the Soccer Field.
CCC will play four out of its next five games at home, possibly allowing the team to build on its 3-1-1 home record.